TONIGHT!! Celebrate the last night of Pride Month at our outdoor, singalong screening of Hedwig and the Angry Inch, John Cameron Mitchell's 2001 film adaptation of the beloved rock-musical. Before the film, enjoy a pre-film drag performance by veteran nightlife personalities Chiquitita and Charlene Incarnate and a happy hour with DJ Illexxandra.

This is our first Moonlight & Movies event of the summer.

Chiquitita is a drag performer, event producer and visual artist based in New York City. Since being crowned Miss Bushwig in 2018, she has utilized the stage as a platform to amplify queer performance. Through celebrated tribute-cabaret shows, and projects to uplift her community, Chiquitita continues to push the boundaries of what being a drag performer means. She and her work have been profiled in Allure, W Magazine, Vogue, The Wall Street Journal and The New York Times.

Charlene Incarnate is a drag priestess and producer living in Brooklyn. She enacted her gender transition as a performance art piece on New York drag stages, and now her performance work centers around the aggressive, dangerous and inherently political nature of living in a transgender body.  After being crowned Miss Bushwig 2017, she now headlines the drag festival annually and produces shows in clubs and theaters city-wide. She was a 2019 OUT100 honoree and can be seen as a featured storyline in Wig, the HBO Documentary about New York drag scene's past and present. 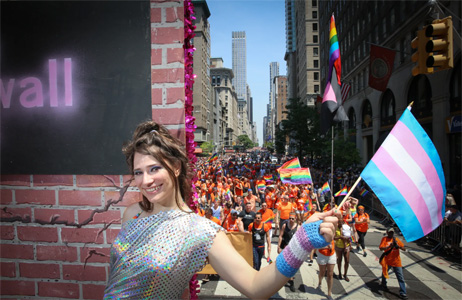 About the DJ
DJ/producer Illexxandra is a staple of the Brooklyn underground, drawing from soundsystem culture, global bass, future sounds, funk, and classic club styles. She plays regularly for Hot Rabbit and has performed landmark New York LGBTQ events including the Brooklyn Museum's Pride parties and Everybooty at BAM. Illexxandra was the DJ on the Stonewall/Heritage of Pride float in the 2016 and 2017 NYC Pride March. She is a resident DJ at the infamous Rubulad party and was a resident at the Night Fever disco exhibit at the Museum of Sex.

Uptown Bounce: I Love the '90s

FREE! Throwback to the '90s with this edition of our Uptown Bounce summer block party, featuring the songs you loved from grunge to gangsta rap.
See All Events