New Yorkers, like most Americans, love to read about catastrophes. Honed by the sensationalistic 19th century press, the public soaked up the myriad stories of fires, murders, drownings, and explosions that dozens of daily papers carried. Equally riveting were colorful stories about the new domestic and foreign politics that had emerged in the last quarter of the 19th century.

When a fierce fire broke out at a factory near Washington Square in lower Manhattan in 1911 – what we today refer to as the Triangle Shirtwaist Factory Fire -- it combined sensationalistic horror and new politics. In a city accustomed to catastrophes, it might have just been a three-day story that faded away but for the fact that it marked a societal turning point. This photograph captures a moment of commemoration following the deaths of almost 150 people, but it also tells us about an event which propelled New York City and the rest of the nation to create profound changes in the policies, laws and practices connected to labor, politics, and gender. 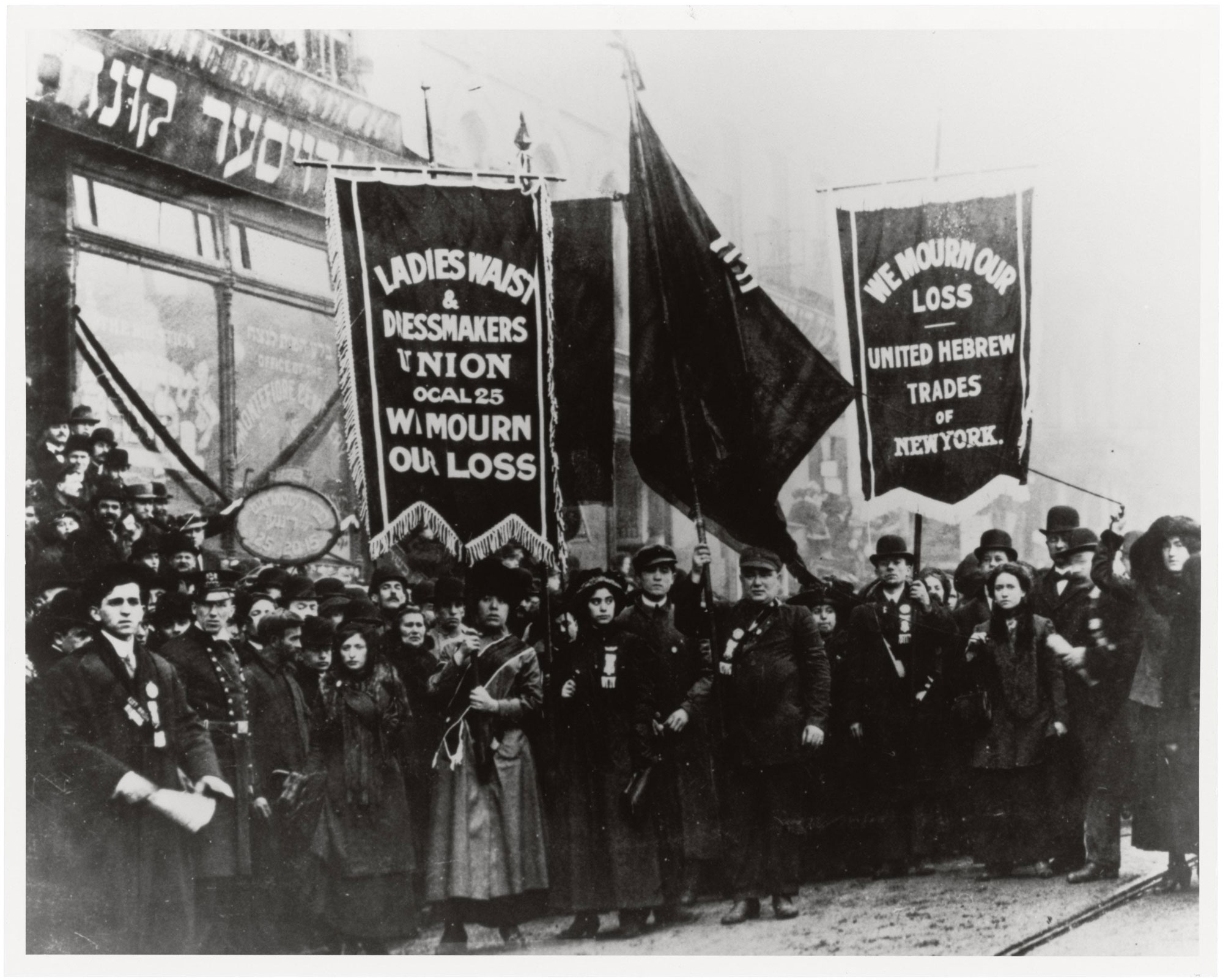 The majority of the dead were poor and foreign, typical of the vast workforce of New York City, the port of arrival for more immigrants than any other American city. They had brought with them ambition, hunger for knowledge, and a healthy appetite for dissent, long denied to them in their homelands. Once they arrived at the “golden door” of Ellis Island, they sought shelter and work. Thanks to the immigrants, the city’s economy boomed, making New York the biggest manufacturing city in America.

Adding to the notoriety of the story was the fact that the dead were mostly women.  It was not widely known that a huge proportion of immigrant women had entered the workforce, propelled by the need for a wage. Despite European traditions of women working from the home, in America they sought whatever jobs they could, either in unregulated large factories or in tenement apartments doing grueling piecework. No industry had more women than the garment industry, which in the first half of the 20th century came to produce almost 90 percent of the nation’s clothing. Sometimes working 16 hours a day in unheated, poorly lit, unventilated spaces, workers had little choice but to do as they were told, and were paid only for what they produced. If you didn’t like or couldn’t complete the work, another person would be ready to take your place.

Some recourse did arise in the early 20th century, when the American labor movement began to coalesce and demand protection for workers. European ideas that challenged the conventional capitalist system became widely disseminated in America, proposing a new order in which workers’ rights were primary, so that fairness and equality were extended to all in the workplace. New York papers were filled with stories about communism, socialism, anarchism, and the new labor organizations, all of which challenged the idea that Gilded Age prosperity was shared by all. Nowhere were the voices of protest more vocal than in New York. As iconic figures such as Samuel Gompers laid the groundwork, the new unions aimed to protect workers from the unregulated vagaries of industry. They demanded regulations on how many hours one could work, the conditions one had to work under, and what wages should be. The unions began to flex their muscles through the mechanism of the strike, refusing to work, an unusual concept in Western history. Some perceived this as a radical threat to society, endangering its prosperity and threatening challenge capitalist success with socialism.

Such was the case with the Triangle Shirtwaist strike in 1909. Shirtwaists (on view in Activist New York) were a popular and inexpensive clothing item for women, and most of the workers in the factories were also women, usually Jewish or Italian.  The well-organized, primarily female strike captured the public’s attention at a time when the suffrage movement was at its peak.  Working-class women like Rose Schneiderman found their voices, claimed labor leadership roles, and demanded rights, at a time when women were bereft of any political roles in society. The strikers found support from well-off women, too, like Alva Belmont. People gawked at the picket lines, and sometimes tried to disrupt it. In the end, their victory was more symbolic than substantial, with few concessions to wages and hours.

If the strike is little remembered today, it is because only two years later, the disastrous Triangle Fire occurred, in which 146 people died (56 burned beyond recognition). The March 25, 1911, tragedy illustrated everything wrong with industry in an age when industrial regulation was just starting: the women were locked in, there were almost no working fire exits, workplace conditions were extremely hazardous, the hours long, and the workers, all of whom but 13 were women, had few amenities or breaks. In a city all too used to fatal fires, this one was particularly heart-breaking, as many of the trapped women jumped from eighth, ninth, and tenth floor windows, dying on impact, and others burned to death. The Asch building, off of Washington Square, was new and technically was fireproof—the building withstood the flames, though the interior was gutted. And while New York had a capable fire department, it had no ladders that could reach the higher floors of these new tall buildings

The bodies of these young workers, lying lifeless on New York’s sidewalks, more than horrified the public—it galvanized the movement for reform and prodded politicians into passing legislation to prevent another such tragedy. While the majority of the 700 workers escaped, the 146 who had died were front and center in press coverage. As police wagons brought the bodies to the morgue, hundreds of relatives lined up frantically trying to find out if their daughters, wives, and mothers were among the dead. Pictures of the bodies and coffins lined up in the City Morgue shocked the public.  “Horrible cries had burst from the misery stricken mob,” reported the New York Times (March 28, 1911), and even the police were said to be shaken. Some women were so poor their families could not afford their burial, and the Hebrew FreeBurial Association provided free interments in their Staten Island cemetery. Some of the families received small financial settlements, little help or consolation at the time.

The photograph of the union mourners (made possible through new medium of photography), conveyed not only the enormous public sympathy to the tragedy but also the shift to the legitimacy of labor in New York. The Ladies Waist and Dressmakers Union and the United Hebrew Trades of New York, shown in the photo, were two of the most effective of the new unions. Women, historically discouraged from active public roles, were front and center, showing that by the early 20th century there had been a sea change in attitudes toward them. Only seven years later, the U.S. Congress passed the nation’s first suffrage law, allowing women equal political participation in the nation.

Another outcome of the fire, and one that these mourners sought, was a thorough investigation of the causes of the disaster. While we are used to such fact-finding missions today, at the time it was unusual. The Factory Investigating Commission came out of a New York State legislature initiative to respond to public indignation over the deaths. The Triangle Shirtwaist tragedy forever cemented the notion that that the state has responsibility for the welfare of all its members. Even one death, whatever the circumstances, was too much if it could have been prevented.

Women have been considered some of the most visible advocates of the temperance movement, but did you know that women were also some of the most active opponents of the 18th amendment?
Movements and Causes Monday, November 7, 2016

With its cheeky title, Occupied Wall Street Journal hopped off the printing press and into Zuccotti Park in Lower Manhattan roughly one month after the Occupy Wall Street encampment popped up on September 17, 2011.
See All