With its cheeky title, Occupied Wall Street Journal hopped off the printing press and into Zuccotti Park in Lower Manhattan roughly one month after the Occupy Wall Street [OWS] encampment popped up on September 17, 2011. During the months of October and November, Occupiers printed tens of thousands of copies to provide news about the encampment. While social and digital media helped Occupy Wall Street to capture the attention of the world, the Occupied Wall Street Journal added an essential element to the encampment’s democratic experiment: the press. 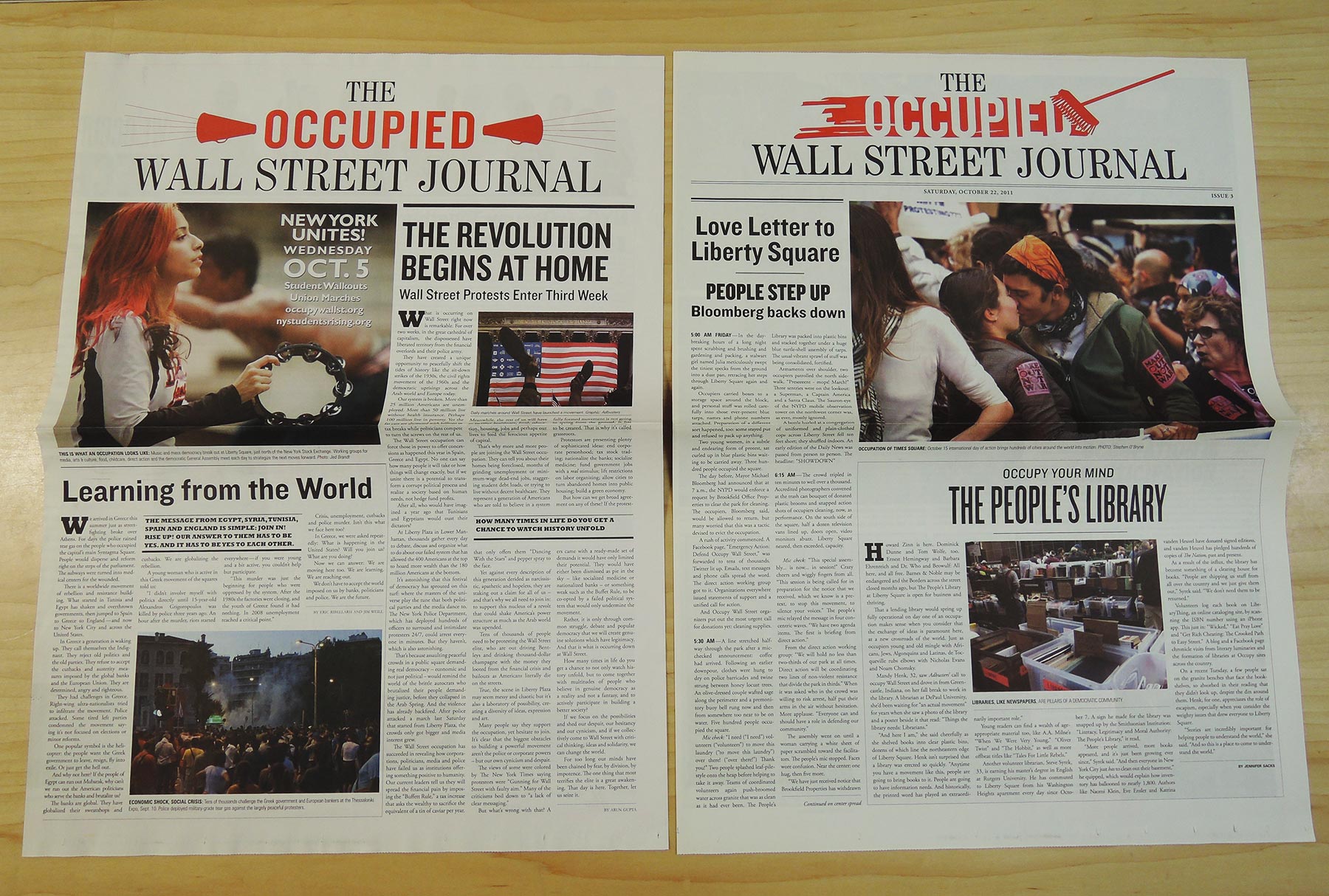 In 2011, economic inequality in the United States stood at levels not seen since the Roaring Twenties.  The top 1% of earners received about 20% of all income in the United States, while the top richest 1% owned 40% of all wealth in the country. Anger over inequality - coupled with a deep disillusionment about the political influence of large corporations and the very wealthy - galvanized the Occupy Wall Street movement.

Occupy Wall Street drew inspiration from preceding mass protests that took place across the country and around the world (including the Arab Spring).  Accordingly, the Journal covered occupations and marches unfolding across the globe. OWS drew heavily from among highly-educated and under-employed young adults, including many who were disappointed with President Barack Obama, after his historic election had raised their hopes for change.  Members of labor unions, educators, other professionals, and seasoned activists from earlier social movements also joined the movement. Critics pointed out the relative absence of people of color, the working class, and the poor in the ranks of OWS.

“We Are the 99%” expressed “precisely what [OWS] is fighting,” The Occupied Wall Street Journal explained.  “It is fighting the astonishing unfair distribution of wealth in our country … It is fighting the reality that Wall Street and Capitol Hill are one and the same.”  The content of the Journal reflected the movement’s core concerns: the predicament of “The 99%,” the failure to secure meaningful reform after the financial crisis and bail-outs, policymakers’ inability to provide sufficient relief for imperiled homeowners, the heavy indebtedness of Americans beset by stagnant wages and persistent unemployment, and ongoing conservative challenges to labor rights, reproductive rights, and public education.

Many criticized Occupy Wall Street for its failure to issue any specific ‘official’ demands. Indeed, the Occupied Wall Street Journal contained none. “We are speaking to each other, and listening. This occupation is first about participation,” the editors explained in the first issue, “for Wall Street and Washington, the demand is not on them to give us something that isn’t theirs to give.”  As Occupier Marina Sitrin related, “the commitment [is] to listening to one another and really hearing each other; the acceptance of the other, seeing yourself in the other, and feeling heard.”

Occupied Wall Street Journal published statements by the General Assembly - OWS’s decision-making body, open to all as a form of direct democracy - along with pieces written by high-profile academics, journalists, and activists. The Journal also offered space for lesser-known OWS participants to share their personal stories, to indict the status quo, and to demand recognition and change.

By providing space for well-known and unknown Occupiers alike, the Occupied Wall Street Journal signaled its commitment to direct democracy and its rejection of hierarchical organization. “Pre-figurative” politics distinguished the Occupy movement; those who occupied Zuccotti Park between September 17 and November 15, 2011 understood their encampment as a living experiment in creating a more just, secure, and egalitarian society. “It was and is about ending the rule of capital over our lives and it did so in a joyous, festive manner,” Arun Gupta remembered. “We may never be able to prove, through logic, that direct democracy, freedom, and a society based on principles of human solidarity are possible,” wrote David Graeber in the October 25th issue of the Journal. “We can only demonstrate through action. In parks and squares across America, people have begun to witness it as they have started to participate … how many other ‘impossible’ things might we pull off?”

The publication run of the print version of The Occupied Wall Street Journal coincided with the high-point of Occupy as a mass movement of direct action. On September 24th, police in New York City, pepper-sprayed OWS participants.  Less than one week later, 700 demonstrators were arrested on the Brooklyn Bridge. On October 15, 2011, tens of thousands of people joined rallies in 900 cities across the globe, protesting that their governments’ responses to the still-unfolding global economic crisis privileged the few at the expense of the many.

On November 15th, New York City police cleared out the “privately-owned public space” of Zuccotti Park, citing sanitary conditions as the cause of the eviction.  Efforts to re-erect the encampment failed.  But in the months and years that followed, the new generation of activists spawned by Occupy Wall Street took up new initiatives, including: a May Day march on Union Square (2012), rent strikes, unionization drives, campaigns for raising the minimum wage, Occupy Sandy (to assist victims of superstorm Sandy), Occupy Homes (against foreclosure), and the “Rolling Jubilee” to collect donations to buy up and forgive debt.  Occupy Wall Street also marked the return of collective direct action and a turning point in the use of social media in political protest.

Occupy Wall Street interjected the issue of economic inequality back into American politics, where it had been largely absent since the Great Depression. In the years since, New York City Mayor Bill de Blasio, presidential candidate Bernie Sanders, and other politicians who took up the issue of inequality achieved a degree of support few would have predicted before Occupy Wall Street.

In the years since, politicians who took up the issue of inequality -- Mayor Bill de Blasio, presidential candidate Bernie Sanders -- achieved a degree of support few would have predicted before Occupy Wall Street.  And although the demographic segments most represented in Zuccotti Park rejected Donald Trump, his supporters rallied behind his charge that the Washington establishment had ignored the economic struggles of ordinary Americans.

We asked the author, why is studying history important to you?

During my lifetime, American political culture has been distinguished by a pervasive belief that individual freedom is best guaranteed by freedom of the market. How can history help us account for this rather unique faith in unencumbered capitalism? This is the question that motivates me most as a researcher and as a teacher.

Julia is the author of When Wall Street Met Main Street: The Quest for an Investors’ Democracy (Harvard University Press, 2011) which received the Vincent DeSantis Prize from the Society of Historians of the Gilded Age and Progressive Era in 2013. Ott serves as a Distinguished Lecturer for the Organization of American Historians. She co-edits Columbia Studies in the History of U.S. Capitalism for Columbia University Press. Ott specializes in political history and the history of capitalism. In her teaching and in her research, she investigates how financial institutions, practices, and theories influence American political culture and how, in turn, policies and political beliefs shape economic behavior and outcomes.

In this guest post, Lisa Keller explores how a 1911 tragedy galvanized support for labor reform and worker's rights in New York City.
See All