Behind the Scenes, New York at its Core

In our 21st century world of Twitter feeds, Facebook updates, Snapchat, Instagram, live blogging, and viral videos, it is sometimes hard to remember a time in which we were not culturally programmed to record and transmit events big and small in our daily lives. Indeed, future generations will have a trove of material accessible via social media and digital sources to reconstruct the past. As a historian, I also see a value in our self-documenting habits beyond the preservation of our personal lives – our society is rigorously building a record of new social movements. For example, in 2011 Occupy Wall Street established an “Anarchive” to maintain a running record of the group’s work, the ephemeral materials that they created, and the media that surrounded them.

The Occupy demonstrators may have been among the first “people’s movements” to craft their image under the lens of social media, but they borrowed their sit-in techniques from the past—in particular, from Civil Rights demonstrators of the 1960s. It’s an era we will focus on in the Museum of the City of New York’s upcoming New York at Its Core exhibition, where visitors will see an overview of this tumultuous, transformative time in our history. Part of my job as Associate Curator for the exhibition has been to track down materials that documented social upheaval in New York from this analog era: paper, fliers, and tools used by activists who did not live in world saturated by 24-7 media. These objects help to provide insights into the movements that were creative responses to the racial segregation that plagued the city in the midst of the 20th century.

Historical memory tends to locate the Civil Rights Movement in the American South: cities like Birmingham, Selma, and Little Rock are remembered as key battlegrounds. Yet New Yorkers of the 1960s also fought – and in many instances won – battles against discrimination in housing, employment, and education. In many ways, the Brooklyn chapter of the Congress of Racial Equality (CORE) was one of the more dynamic and creative chapters of this national activist organization and staged a number of successful campaigns to integrate schools, desegregate housing, create jobs, and improve sanitation and living conditions in impoverished neighborhoods like Bedford-Stuyvesant.

Versed in this history in part through the work of scholars like Craig Steven Wilder and Brian Purnell, whose books on racial politics in Brooklyn helped us shape some of the exhibition’s narrative, I mined the collection of the Brooklyn Public Library, which holds an extensive collection of materials related to Civil Rights in Brooklyn and the work of Brooklyn CORE.

It was at BPL that I came across the 1962 fliers for the Brooklyn CORE boycott of Sealtest, once considered “the world’s largest dairy provider.” Sealtest employed almost no African American or Latino workers: only 1% of their workers were non-white, and they were employed in the lowest-paid, most menial positions. A true grassroots protest, the Sealtest boycott lasted for two months and highlighted discrimination in the hiring policies of this Brooklyn-based company. By calling the company out for its actions and pressing like-minded New Yorkers to withhold their purchasing power, CORE effectively pushed back on the discriminatory practices at Sealtest. In an effort to coalesce a growing Puerto Rican population around this cause, CORE protestors produced fliers in both English and Spanish.

As I worked my way through boxes of CORE protest materials from the 1960s, I located a small pink-and-blue military-style cap. With the word CORE printed in pink along the side, it was a bold personal adornment worn by an activist in the field. Though faded by time, this hat, alongside the flier that reads “BOYCOTT SEALTEST” provides a record of the goals, methods, and tools available to the civil rights movement in New York more than 50 years ago. 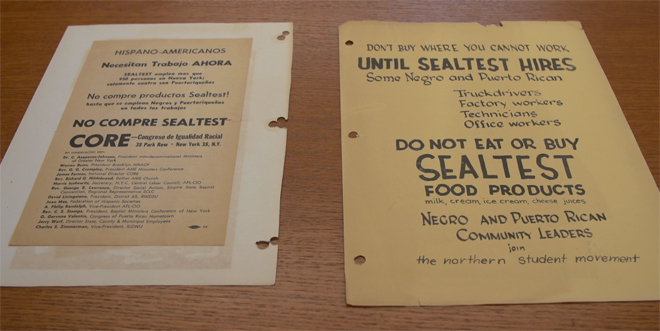 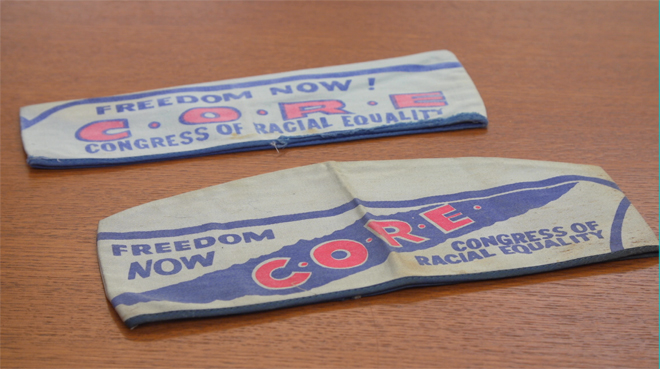 In the spirit of grassroots organizing and grassroots collecting, we are indebted to the forethought of an activist named Rioghan Kirchner for the CORE collection at Brooklyn Public Library. Born in Liverpool, Kirchner and her husband moved into public housing in Sheepshead Bay in the 1950s. Captivated by the images of the Freedom Riders in the South, Kirchner felt inspired to join the civil rights movement in her own backyard. For many years she worked as an organizer against housing discrimination, investigating and eventually “testing” landlords who would not rent or sell to black families. It was Kirchner who compiled and donated this collection that documents this era of activism to the Brooklyn Public Library. Without her forethought on the significance of these objects to reflecting the times she lived in, these artifacts – and the stories they tell – might have eventually been lost.

New York has a rich history and local documentation of our city’s Civil Rights battles. Our work with archives like the Brooklyn Public Library to bring these stories to life – as New York continues to contend with questions about the racial diversity of its neighborhoods and schools – is a large part of what will make New York at Its Core a captivating inquiry into the road that has led this city to where it is today. By bringing the voices of this movement to light, we tell the story of everyday people – and are indebted to their efforts to save the paper leaflets, fliers, hats, buttons, and posters that served as social media in their era, and which tell the story of a movement that changed a city.

From Bed-Stuy to Harlem: The City Confronts Civil Rights

Jamaica, Queens was home to Rufus King, one of our first senators. Inside his former farmhouse–still standing today–was a medicine chest, and inside the chest….well, you’ll have to read on to find out.
Behind-the-Scenes Tuesday, May 31, 2016

On a hot August afternoon last summer, I left the office early and caught the 5 train north. My objective was to locate the site of the Ursuline Convent in what had once been the rural village of Melrose, and was now the heart of the South Bronx.
Movements and Causes Wednesday, October 19, 2016

Dante from Million Hoodies for Justice is just one of the NYC activists profiled in our new Activist New York touch screen interactive stations.
See All