The New York City of statesman and diplomat Rufus King (1755-1827) was a grim place. Disease crippled the city, with its rampant overcrowding and meager sanitation. And despite their stature, the statesman and his wife, Mary Alsop, couldn’t escape the brutal conditions of life in 18th-century New York; two of their seven children died in early childhood. 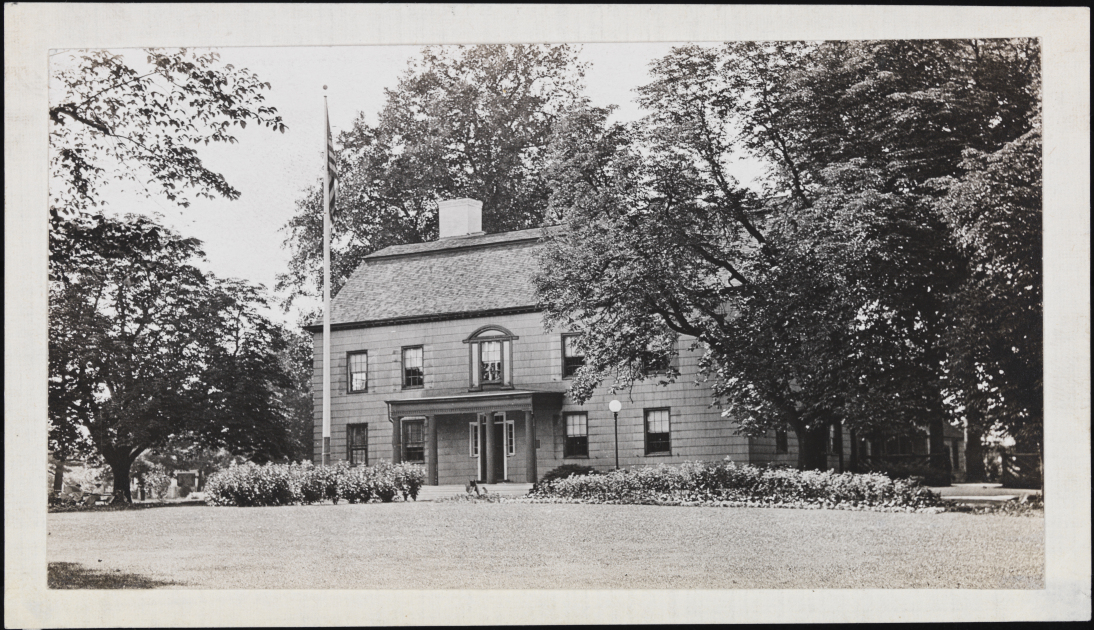 To protect their family’s health, Rufus and Mary packed up and headed for the country, settling in the present day neighborhood of Jamaica, Queens. But fresh air wasn’t their only remedy. They also filled their new farmhouse with medicines, herbal remedies, and salves – their best defense against the ailments of the day. Today, both King Manor – situated between 89th Avenue, 150th street, 153rd Street, and Jamaica Avenue – as well as the tinctures remain. The bottles survived two centuries thanks to the family’s traveling medicine chest, passed down through the King family and donated to the Museum in 1941 by a descendant.

Last spring, the Museum embarked on a project to preserve the medicine case, with the support of the Greater Hudson Heritage Network. Recently, we completed the conservation of Reese’s Universal Dispensary in preparation for its display in New York at Its Core, a major exhibition on the city’s 400 year history, opening on November 18, 2016. 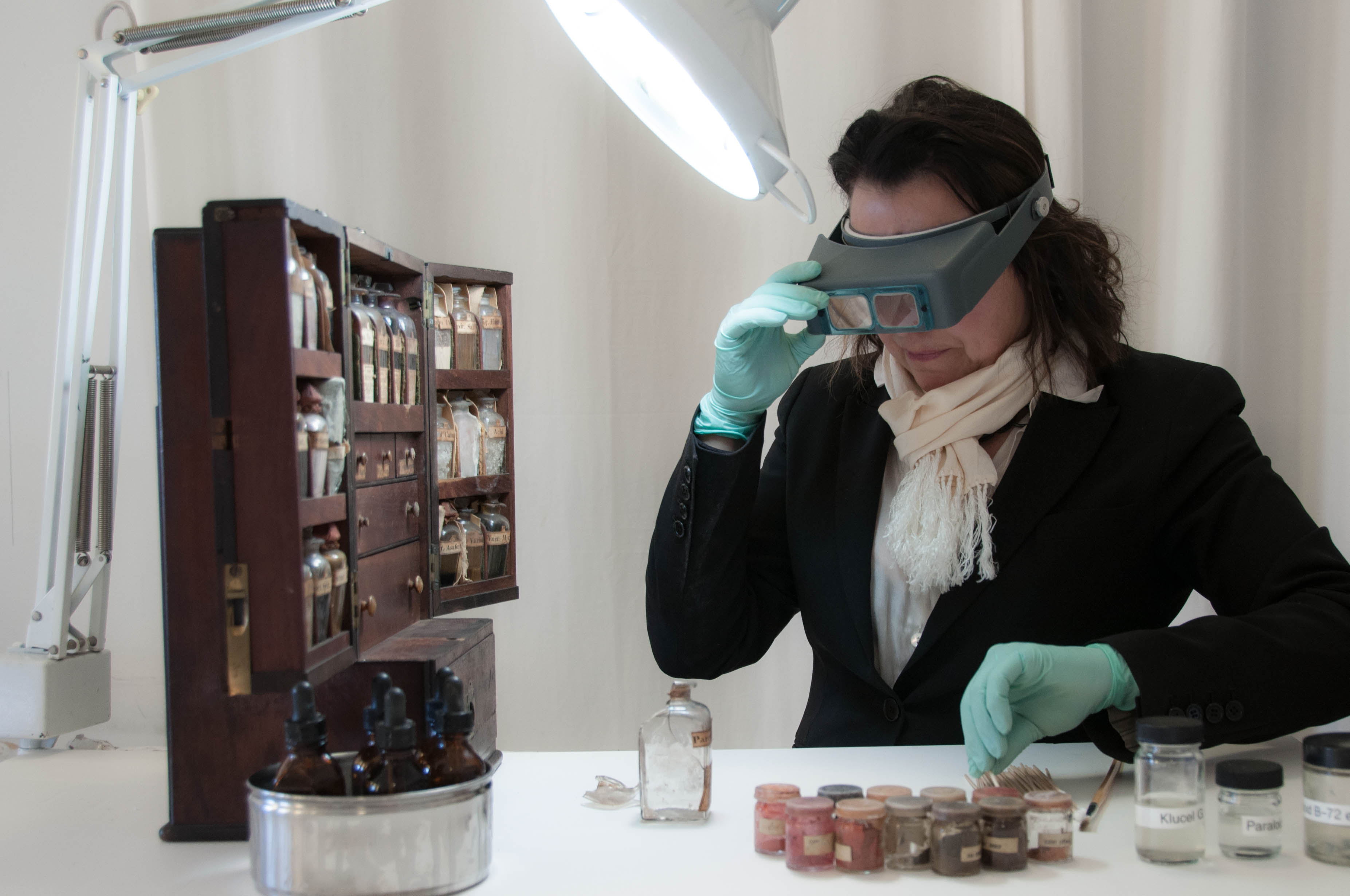 Preparing a 200 year-old medicine chest for exhibition is a complicated job. In addition to this object’s age, as a traveling medicine chest it was likely carried from place to place, and subject to a range of bumps, jostles, and transport damage during the course of its useful life. To bring it back to health, the Museum engaged objects conservator Linda Nieuwenhuizen of GMAB Art Conservation Services, a guest lecturer at the Conservation Center of the Institute of Fine Arts, New York University, to prepare the initial treatment proposal for this object, and carry out the conservation.

Ms. Nieuwenhuizen began by locating  a digitized version of the booklet that originally accompanied the case, in order to identify the contents of the medical bottles and jars. 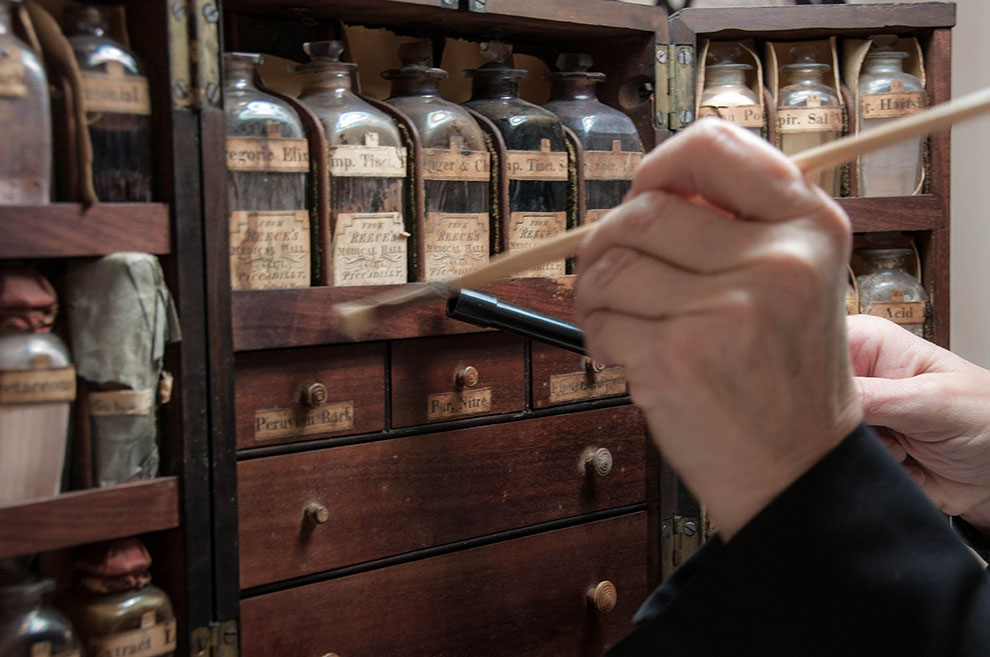 Once she studied the object, she discovered a variety of issues to tackle: cracks in the wooden case and missing veneer, corroded fixtures and missing drawer pulls, broken glass bottles and leaky stoppers, and remnants of pest infestation in the fabric lining.  Materials types included wood, metal, glass, paper, and a wide range of medicinal powders (at times, unidentified).  As with many objects of material culture, the object itself carries inherent vice, meaning that the very nature of the objects causes and accelerates is decomposition.  In this case, the presence of the medicinal material was one of the greatest agents of damage to the object, as bottles cracked and packets of powder developed holes, causing the contents to leak throughout the case and damaging significant portions of the contents. 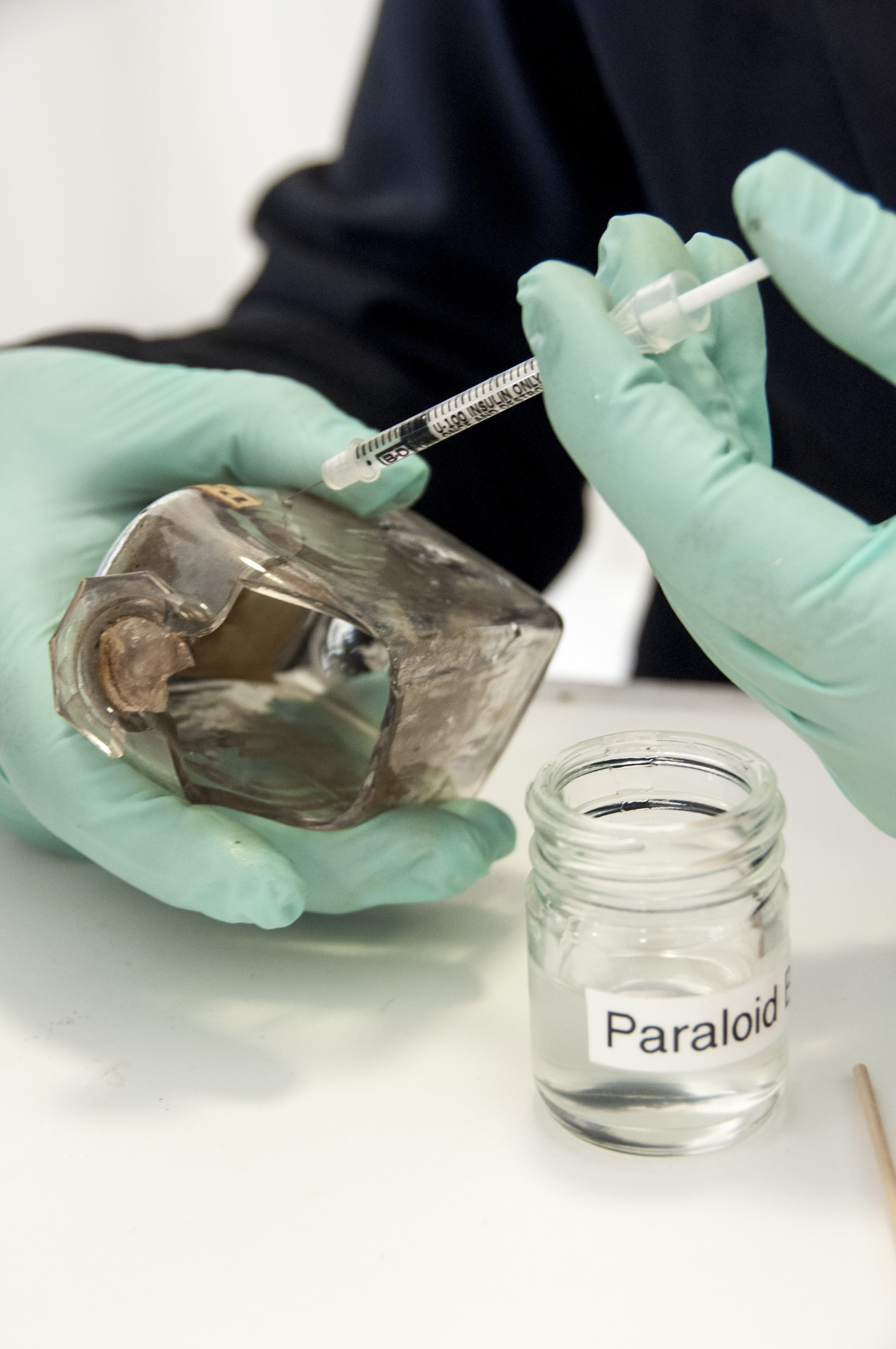 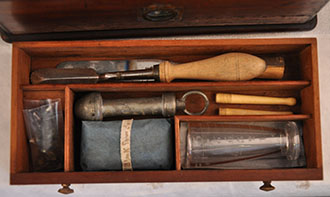 The range of cleaning included overall surface cleaning using primarily dry cleaning techniques, and following up with water and ethanol.  She cleaned bottles and their labels individually in order to treat the glass and paper separately.  In some cases the paper was replaced, transferring the identifying label to the new paper label, and then Ms. Nieuwenhuizen  re-adhered both the conserved and new labels. When working with broken bottles and stoppers she reconstructed these from extant parts, and new stoppers were cast where missing.  Drawer repair and cleaning included casting a replacement drawer pull, cleaning the interior and all individual components, and re-bagging a loose black powder and transferring the label from the torn original housing.

Ms. Nieuwenhuizen cleaned the wooden exterior of the case, filling the cracks and clamping the parts to stabilize the structure, and filling veneer filled where missing.  During the course of her treatment, Ms. Nieuwenhuizen located a previously unknown sliding panel in the rear which revealed additional bottles of medicine. 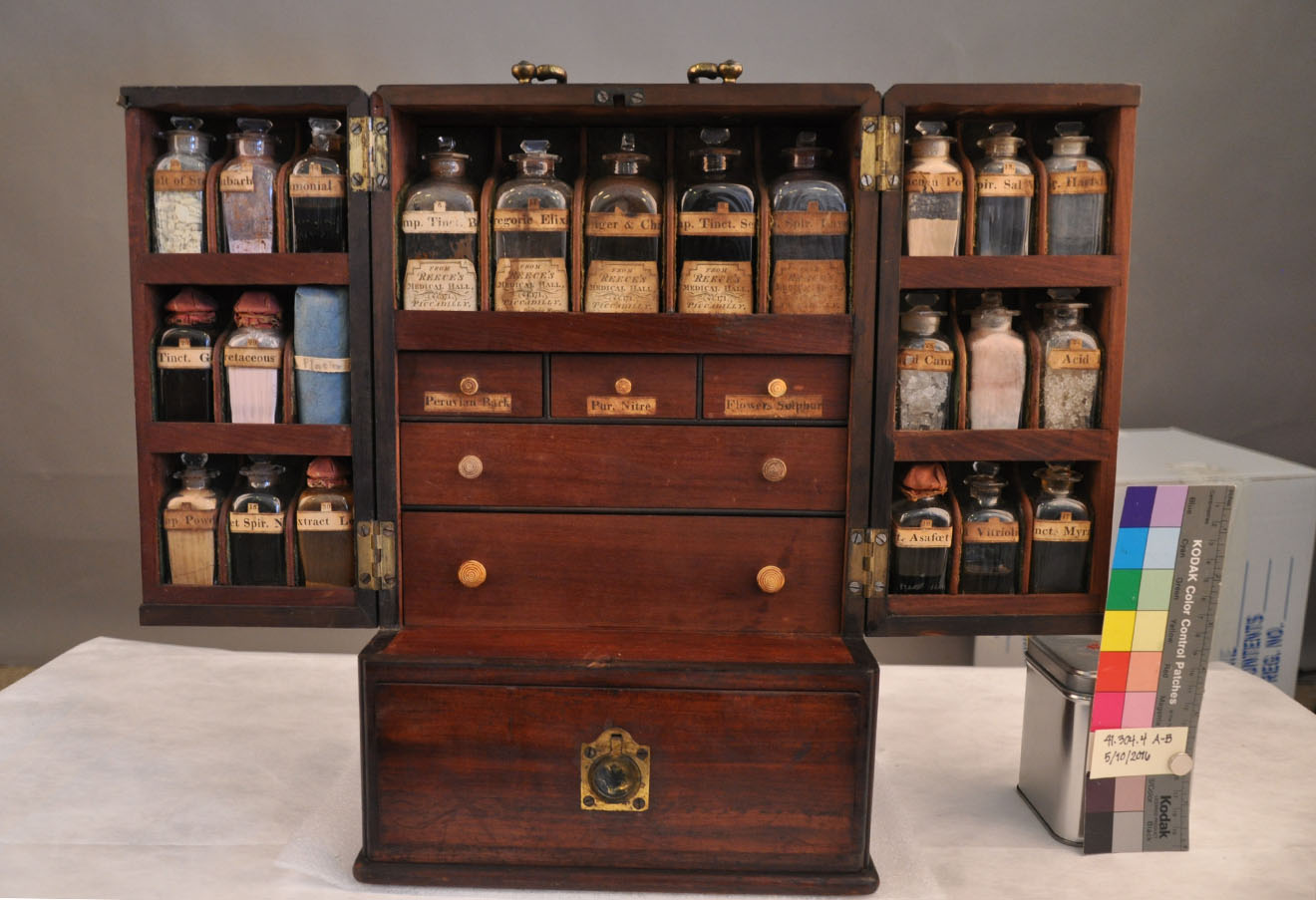 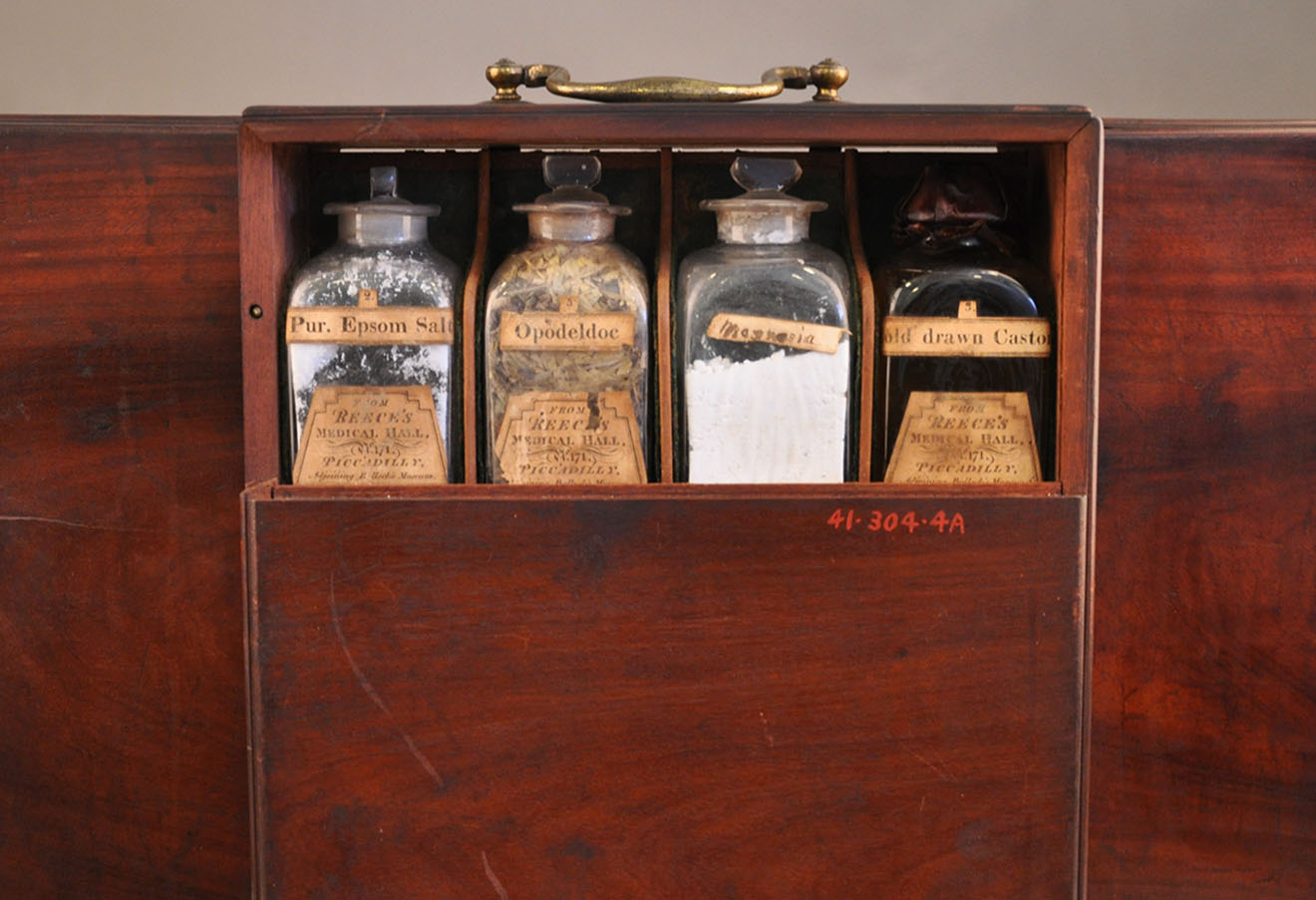 Conservation often reveals surprises that help us understand more about how the object was used by its original owners.  Despite the fact this chest was originally made and distributed by Richard Reece’s Medical Hall in London, four of the bottles in the case were sourced from a local Jamaica, Long Island (Queens) apothecary, John S. Seabury. This fact provides further evidence the item was used by the King family in their home.

With proper conservation, the Museum will now be able to use this case in New York at its Core to illustrate the consequences of density and the ways in which wealthy New Yorkers, like King, attempted to mitigate the effects of disease with rudimentary drugs or simply by fleeing to the country.

The Museum is grateful to the Conservation Treatment Grant Program of  the Greater Hudson Heritage Network, which is made possible with public funds from the New York State Council on the Arts, a state agency.