It’s harder and harder for an independent restaurant to survive in New York City, according to an article published in the New York Times on October 25, 2016: “Is New York Too Expensive for Restaurateurs? We Do the Math.” Here we look back at restaurants that enjoyed a successful run in our city:

Sweet’s Restaurant was established in 1842 by Abraham M. Sweet on Fulton Street, in what is now the Schermerhorn Row Block Site in the South Street Seaport. It operated almost continuously for 157 years, pausing for the time right before and during the Civil War, and again from 1982-1983 as the landmark building underwent restoration. Sweet’s weathered the Seaport’s decline into a derelict zone, brought on in the mid-twentieth century by the relocation of the shipping trade to Manhattan’s west side. Peter E. Dans reminisced about Sweet’s in the book Life on the Lower East Side: Photographs by Rebecca Lepkoff, 1937-1950: “They took no reservations, and the lines, especially on Fridays, stretched down the stairs of the second floor restaurant and on to Fulton Street. Sweet’s was known for excellent service by knowledgeable waiters, one of whom was in his nineties, and all of whom remembered what regulars liked to order.”

Sweet’s also survived, up to a point, the area’s transformation that began in the 1980s, from a neglected waterfront into an upscale shopping district. A violent nor’easter wrecked the restaurant in December 1992. The damage caused by the storm, coupled with the several months’ worth of back rent the restaurant was said to owe (their rent had increased as the neighborhood became more desirable) shuttered Sweet’s restaurant for good.

Italian immigrant Adolph Mariani opened Adolph’s Asti Restaurant in Greenwich Village in 1928, when his dreams of becoming an opera singer did not pan out. He employed amateur and professional singers as waiters. By most accounts, the food was average but the entertainment was spectacular. Sometimes customers were encouraged to participate. The New York Times observed in an article published on September 21, 1990: “On a recent weekday evening, the red-jacketed waiters elicited ‘volunteers’ for a nightly frolic. About a dozen customers were taken into the back room, dressed in monks’ robes and handed little imitation candles. The lights darkened and the troupe marched around the room to the Anvil Chorus from ‘Il Trovatore.’ At the liveliest part of the chorus, Mr. Mariani [Augosto, the son of the restaurant’s founder] slams the drawer of the cash register in time with the music, the little bell actually sounding as if it belongs.” After a grand finale on December 31, 1999, the Asti family closed the restaurant.

In 1954, Abe Lebewohl opened the 2nd Avenue Deli on Second Avenue and 10th Street. The neighborhood, known alternately as the Yiddish Rialto, the Yiddish Broadway and the Yiddish Theater District, was already transitioning at that point – the glory days of Yiddish theater were over, with fewer and fewer Yiddish theaters in existence. Nonetheless, Lebewohl paid homage to the area’s heritage by creating the Yiddish Walk of Fame on the sidewalk outside the deli, honoring such stars as Paul Muni, Lillian Lux and Abraham Goldfaden. Lebewohl, an immigrant from Ukraine who had escaped pogroms and death camps, was known among strangers and employees alike for his generosity. He was murdered in a robbery on March 4, 1996 as he attempted to deliver cash deposits to a bank. To this day the murder is unsolved. In 2006, the 2nd Avenue Deli closed after a rent increase and dispute with the landlord. It reopened in 2007, on 62 East 33rd Street.

In 1967, the actor Patrick O’Neal and his brother Michael opened O’Neals Saloon across from Lincoln Center. But the New York State Liquor Authority threatened to revoke O’Neals license unless the business dropped the word “saloon” from its name. An antiquated law on the books made it illegal to serve alcohol “in such premises as were commonly known and referred to as saloons.” So, the establishment changed the “S” to “B” and became O’Neal’s Baloon. 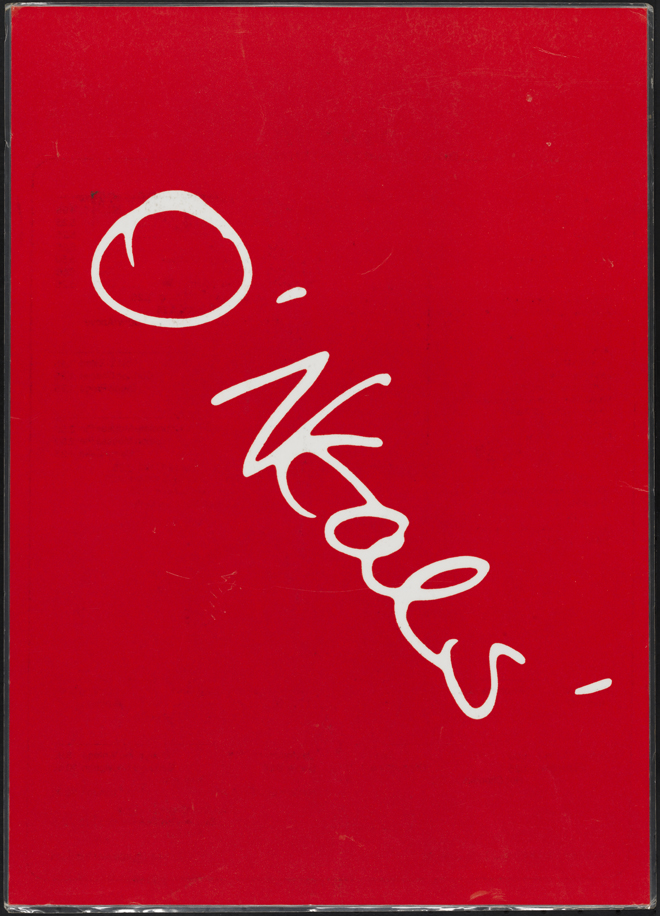 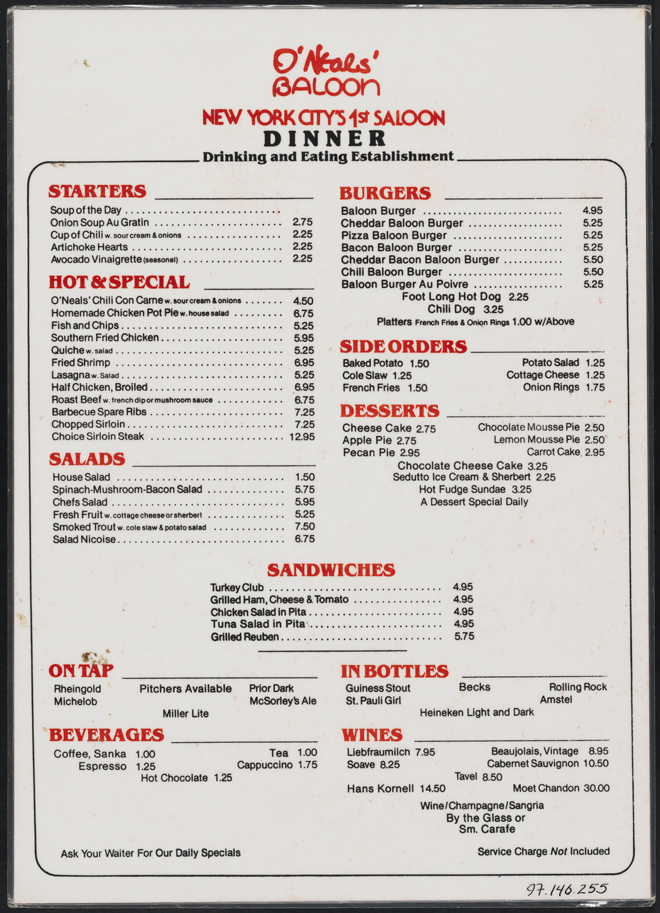 Veselka (Ukrainian for “rainbow”) was established in 1954 at the intersection of Second Avenue and 9th Street, by Ukrainian immigrant Wolodymyr Darmochwal. It was originally a candy shop and newsstand. At the time, the East Village was home to one of the largest expat Ukrainian communities in the world. Veselka evolved as the neighborhood did; it became a hangout not only for Ukrainian immigrants, but also for the bohemian counterculture that flocked to the East Village in the 1960s.

Unlike the other restaurants featured in this blog, Veselka survives today, in its original location. In the late 1980s it became a 24-hour establishment. However, Veselka closed its doors for the first time last year, to celebrate Christmas day. This is a sign of changing demographics – Christmas is celebrated in January for Eastern Orthodox rite Christians, so working on December 25 was not a problem for most in the restaurant’s 62-year history. Now fewer employees, and customers, come from the Eastern Orthodox tradition, so closing on December 25 makes more sense. This year, Veselka will be open until 7 PM on December 25.

New York’s restaurant scene is one of the many aspects of this remarkable city that has shifted with the time.  Come by and visit New York at Its Core to learn about other changes in the city’s 400 year history, and take a peek at where we are headed for the future.

High on a shelf of the legendary Russ & Daughters Appetizing store was an object that perfectly encapsulated the story of New York at Its Core, and a tool that helped launch a 100-year old business.
See All