Behind the Scenes, New York at Its Core

Manhattan’s Lower East Side, one of the most sought-after zip codes for young New Yorkers to settle today, would scarcely be familiar to the people who arrived here at the turn of the 20th century. But pieces of the old neighborhood do still exist. As part of the curatorial team behind the museum’s upcoming New York at Its Core exhibition, I’ve scoured sources across the five boroughs to locate captivating artifacts that illustrate the city’s dynamic history. To that end, in my work as Assistant Curator on the exhibition’s gallery that covers the 20th century in New York, I have visited some surprising locations – not the least of which was a legendary food shop on East Houston Street.

Even in 2016, Russ & Daughters Appetizing store offers a rich window into both the history of its surrounding neighborhood and the legacy of immigration at the turn of the 20th century, which utterly transformed New York City.

The second gallery of New York at Its Core, “World City,” will cover the period from 1898-2012. At the outset of the gallery, we introduce a city that is a hive of economic activity: a booming center of finance, commerce and production. We also highlight the massive influx of immigrants who arrived at Ellis Island in record numbers at the beginning of the 20th century—one of the key drivers of this economic engine. As immigration from southern and eastern Europe peaked in the years before WWI, neighborhoods like the Lower East Side teemed with newcomers who crowded into its narrow streets and dark tenements. Men and women from places like Italy, Russia, Poland, Greece, and Lithuania staffed the factories that churned out an astonishing array of products. They also started small businesses that transformed the social and economic character of the city. Joel Russ was one such immigrant: he arrived from a village in southern Poland in 1907 and began selling herring from a pushcart shortly thereafter. An inexpensive, nutritious fish that could feed a hungry family, herring was a staple in the kitchens of the Lower East Side. 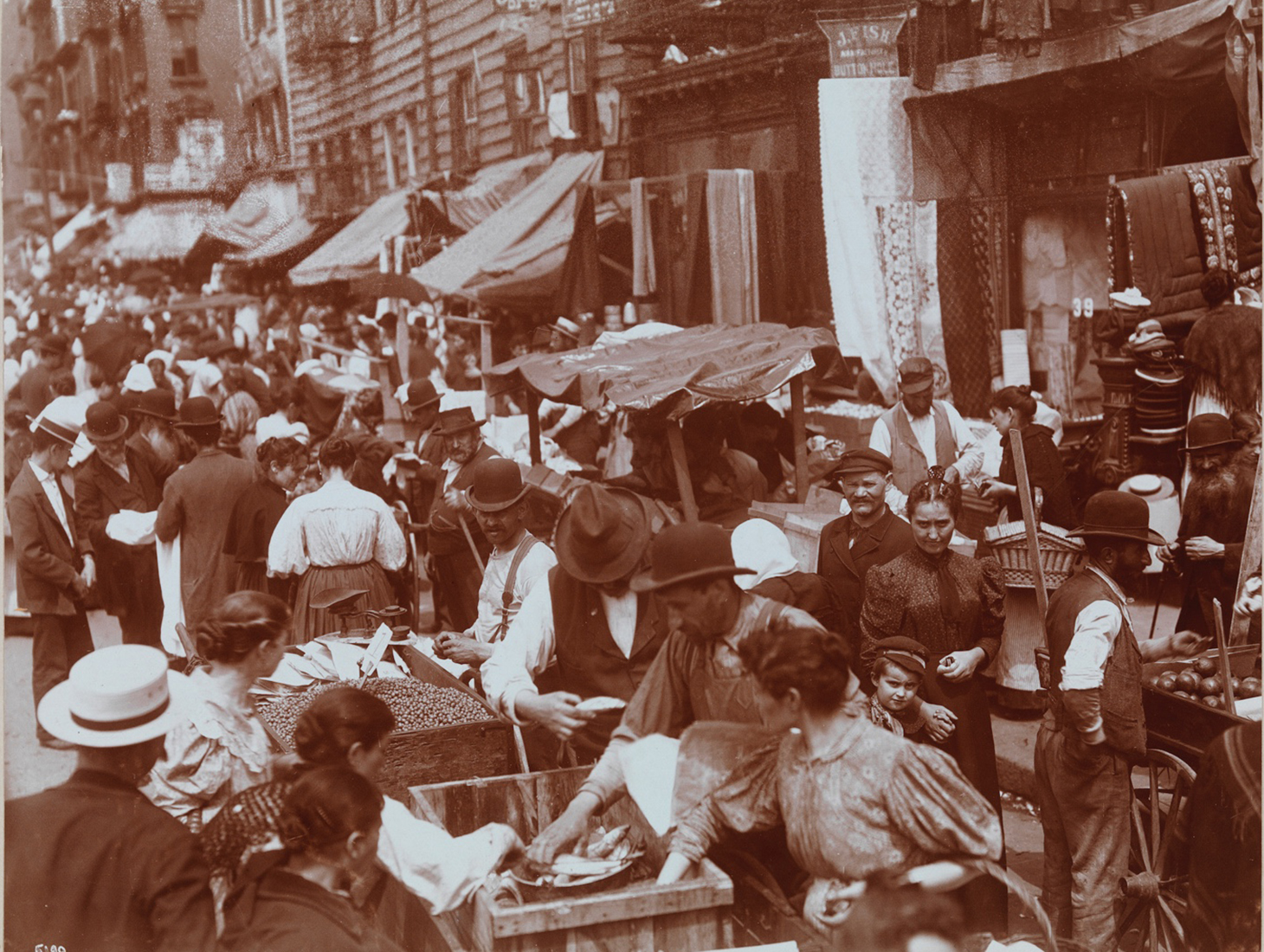 By 1914, Russ had parlayed his pushcart into a store on Orchard Street – an area that had one of the highest population densities in the world at the time. Finally, the entrepreneur opened his appetizing store at its current location at 179 East Houston Street in 1920. The appetizing store was itself a New World innovation, as it carried a wider array of fish than had been available in Europe, prepared in ways that did not adhere to strict Kosher dietary laws.

Knowing this history and hoping to find a way to represent this immigrant-driven entrepreneurship in the exhibition, I arranged a visit to Russ & Daughters in April of 2015. I met with Mark Russ Federman, Joel Russ’s grandson and the patriarch of the family business. The store bustled with customers picking up herring, smoked salmon, salads, and their favorite baked goods. My mouth watered, but I hadn’t really come to shop – I was on the hunt for something to display in our exhibition.

Stroll back in time along Orchard Street in this peek into the Museum’s upcoming exhibition New York at its Core, opening November 2016.

After a few minutes I spotted it. On a high shelf sat a device that had the heavy cast-iron quality of early 20th century manufacturing. With its sturdy base and crank on the end, it had the look of a sewing machine – a tool of an essential New York trade that we had considered showing in the gallery – but was clearly something different. Mark explained that it was an apple peeler and corer that his grandfather had used to prepare apples for herring salad, one of the store’s signature dishes. Once I got a closer look at its complex design and industrial heft, I knew it would make a great addition to our exhibition. Here was a solid material legacy of an immigrant innovator, and a tool that helped launch one of our city’s 100-year businesses.

In 1907, 1 million new immigrants arrived in the United States, mostly through Ellis Island. By 1910, 40 percent of New York City’s population was foreign born. The apple peeler and corer will help us tell the story of this era of unprecedented immigration to the United States. Many people know of the Lower East Side’s grim history during the early 20th century, as revealed by the photographs of Jacob A. Riis and Lewis Hine’s In a Sweatshop, which exposed one of the numerous garment workshops that was responsible for the output of 70% of all women’s clothing produced in the United States. Yet in the midst of the sweatshops and tenements, entrepreneurs like Joel Russ and the Lebanese Sahadi family of Brooklyn built businesses that innovated with old-world food traditions, and which stood the test of time. Today, new generations of immigrants to New York City follow in their footsteps, bringing their own traditions to reshape our city’s ever-changing culture and economy.

A behind the scenes peek into the making of New York at its Core and some of the Civil Rights Era artifacts that will be on view in the exhibition.
Behind-the-Scenes Tuesday, August 9, 2016

Jamaica, Queens was home to Rufus King, one of our first senators. Inside his former farmhouse–still standing today–was a medicine chest, and inside the chest….well, you’ll have to read on to find out.
Behind-the-Scenes Tuesday, May 31, 2016

On a hot August afternoon last summer, I left the office early and caught the 5 train north. My objective was to locate the site of the Ursuline Convent in what had once been the rural village of Melrose, and was now the heart of the South Bronx.
See All