For the People’s Health: Lessons from the Young Lords for Today’s New York

July 14, 2020 marked the 50th anniversary of the Lincoln Hospital takeover, when the New York Young Lords – a revolutionary community group composed of Latinx and Black New Yorkers – occupied the South Bronx health care facility for 12 hours, demanding better care, improved conditions, and a variety of patient and worker rights for the communities of color that Lincoln Hospital served and employed. While these demands for a “People’s Hospital” were made half a century ago, their relevancy for New York City now—in the midst of a global pandemic and uprisings for racial justice—remains undeniable.

In this post, we will examine primary sources that educators recently analyzed as part of the Frederick A.O. Schwarz Education Center’s “Examining Equity in NYC” series, which explores the historical roots of today’s movements for change. Together, we’ll uncover what these sources can tell us about who the Young Lords were, how they illustrate the organization’s radical vision for change, and we’ll draw out three lessons the Young Lords’ health activism can offer for our city’s present and future. We hope you take the story of the Young Lords into your classrooms and communities, carrying the legacy of their work for health care for all pa’lante—onward!

Lesson One: Young people are agents of history.

What messages do the Young Lords want to convey about themselves with this image?

The New York Young Lords defined themselves as “a revolutionary political party fighting for the liberation of all oppressed people.” [1] Headquartered in East Harlem, and inspired by the Black Panthers, the New York branch existed from 1969 to 1976.

The front cover of this edition of Palante, the Lords’ bi-monthly periodical, reveals much about the organization. The Puerto Rican flag and the phrase “Tengo Puerto Rico en mi corazón” (I have Puerto Rico in my heart) hint to the Young Lords’ identity as Puerto Rican nationalists who supported independence for the island and self-determination for Puerto Ricans and all people of color on the mainland.

What stands out to many who view this cover, however, is the fact that the Young Lords were indeed young. The age of members ranged from 14 to early 30s, rendering this an organization comprised exclusively of young people of color. As their confident stances, iconic berets, hairstyles, and postures project, they were part of the larger movement of young radicals that became active in the U.S. and across the globe in the 1960s and ‘70s. When the Young Lords confronted issues like health care, they didn’t worry about being “old enough” or having the proper professional credentials. Their experiences living out the indignities of an unfair system made them more than qualified to speak up and take action.

What is happening in this image? Why do you think people are congregating around this truck?

The Young Lords focused their activism on issues that mattered to people in their day-to-day lives. In fact, the group canvassed community members to learn what issues people cared about before taking direct action—and what they heard prompted an intense focus on health justice.

In the 1960s, many Black and Latinx New Yorkers suffered from tuberculosis (TB), a disease of the lungs that thrives in crowded, insufficiently ventilated, and poorly lit housing. The city offered TB testing in mobile truck units, but at unannounced times and often during the day when people were at work or at school. When the city ignored the Young Lords’ requests to change the trucks’ hours, the activists took matters into their own hands.

On August 19, 1969, the Young Lords commandeered a mobile chest X-ray unit and “liberated” it for the people (after getting the driver’s assent to the action). As the photograph above shows, a Lord climbed atop the vehicle, hoisted a Puerto Rican flag, and used a bull horn to announce to neighbors that the group would be operating free TB testing in front of the Young Lords’ headquarters. Within hours of this action, hundreds of residents received tests and the NYC Director of Health for East Harlem’s district agreed to allow the Young Lords to operate the truck 12 hours a day, seven days a week.

Arguing that health disparities in their Black and Latinx neighborhoods were not accidental, the Young Lords became outspoken critics of what they called “diseases of poverty,” or what we today might call environmental racism: the way that communities of color are disproportionately exposed to harmful environmental conditions—such as poor air quality or bad sanitation—that can negatively impact peoples’ health. The term also describes urban policies that often place industries such as waste treatment plants or garbage dumps in poor and majority-minority neighborhoods. The Young Lords were quick to point out that these structural injustices directly led to high rates of lead poisoning, TB, drug addiction, and other ailments in their working-class communities of color. As Covid-19 continues to disproportionately impact BIPOC communities, the Young Lords’ intersectional approach to health, race, and public policy remains deeply relevant for understanding health disparities in today’s New York.

The Young Lords’ 13-Point Program and Platform reflected a vision of society that was anti-racist, anti-imperial, and socialist. This radical ethos inspired many of their direct actions, including the takeover of Lincoln Hospital in the summer of 1970.

The Young Lords’ radical imagination led them to envision a “People’s Hospital,” where health care would be free, patients would be treated with respect and dignity, and the predominately Black and brown nursing staff could be assured of fair working conditions. What the city offered residents of the South Bronx at that time, however, was an outdated, overcrowded facility where medical residents trained while treating poor people of color, leading residents of Lincoln’s catchment area to refer to the institution as the “butcher shop.”

During their 12-hour takeover of Lincoln Hospital, the Lords’ made seven concrete demands that targeted the root causes of health disparities and offered a holistic vision of care through the life cycle. Their demands included a new hospital building, preventative door-to-door services, a daycare center for patients and workers, and a community-worker board with oversight power. While not every demand was met immediately, this call for a “People’s Hospital” bore fruit. The actions at Lincoln led to one of the first patient’s bill of rights in history, the first recorded public medical trial after an incidence of malpractice, the creation of an innovative acupuncture clinic, and the eventual construction of a new Lincoln Hospital after many years of empty promises. 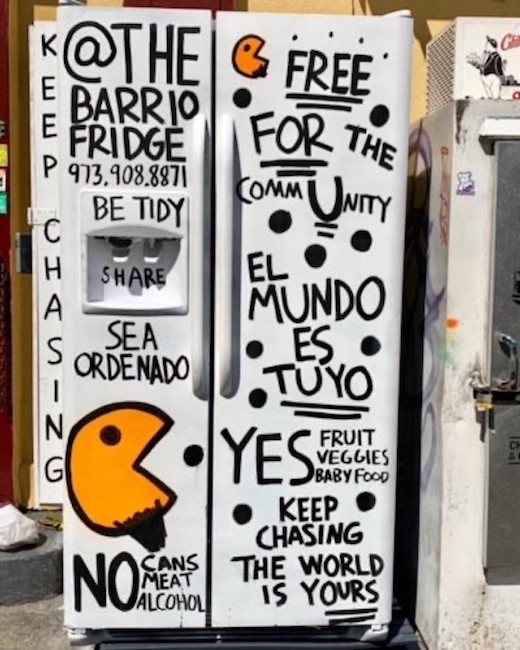 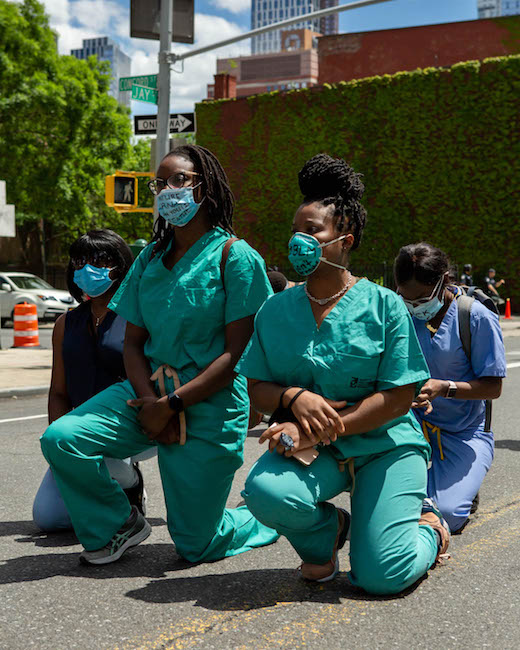 Kristin Slaby. Moment of Silence. June 7, 2020. Courtesy of the photographer.

The legacy of the New York Young Lords lives on in the creative community-based health activism flourishing in New York today. From the emergence of mutual aid groups and community fridges to protests that specifically highlight the disproportionate toll of Covid-19 on New York’s communities of color, the Lords’ vision of affordable, accessible health care—and the naming of structural racism that leads to health disparities—continues to offer powerful lessons for today’s movements for justice.

Bring the history of the New York Young Lords to your classroom or community with the following resources:

The Museum of the City of New York’s exhibition Activist New York traces 400 years of social activism in New York City and includes the story of the New York Young Lords. The gallery and its virtual complement feature the stories of their activism for healthcare justice, from the liberation of the x-ray truck to the takeover of Lincoln Hospital. Find primary sources, historical context, and lesson plans at activistnewyork.mcny.org.

Book our virtual field trip Activist New York for your students! Hear the stories of the Young Lords and learn about their place within New York’s rich and ongoing story of social activism. Learn more and submit a request here.

The Long Fight for Educational Equity in NYC

In the fall of 2020, the Museum’s Frederick A.O. Schwarz Education Center began its series “Examining Equity in NYC,” looking at the historical roots of today’s movements for change. In this post, we dive into the stories from our workshop on the movement to desegregate the city’s public schools and offer resources for educators and students.
Movements and Causes Wednesday, March 25, 2020

Germ City: How Past Epidemics Can Shape Our Knowledge of the Coronavirus

New York is a resilient city that has a long, complex, and fascinating history of battling infectious disease and epidemics. This was presented in the exhibition "Germ City: Microbes and the Metropolis," on view September 2018–April 2019. Take a look at these resources and see how they can put our response to the current coronavirus outbreak in context.
See All