It’s the summer solstice and the king and queen of the fairies are quarrelling in a forest. Queen Titania has stolen a favored serving boy of King Oberon. Or, maybe it is the impending nuptials of the mortal king Theseus and queen Hippolyta that have sparked the fairies’ jealousies. When you’ve been a couple for as long as Oberon and Titania, every little injury just piles on top of another.

The wedding of Theseus and Hippolyta and the resulting fairy fight sets in motion the action of William Shakespeare’s A Midsummer Night’s Dream. Well, that and two pairs of runaway lovers. The first pair, Hermia and Lysander, run into the forest together. They are in love, but Hermia’s father disapproves. He would prefer Hermia marry Demetrius. Demetrius is also in love with Hermia, and he follows the couple into the forest. With him is Helena, good friend of Hermia who is hopelessly besotted with Demetrius. Are you with me so far? Good.

Back to the fairies. King Oberon has devised a plot to take back his serving boy. He engages his right hand, the fairy Puck, to seek out a certain magical flower. When dabbed on the sleeping eye, this flower forces its victim to fall in love with the first creature seen upon waking. Oberon plans to set something ridiculous in plain view of a napping Titania so that when she wakes, she is so distracted with love that he can reclaim his prize.

It just so happens that ridiculous creatures are close at hand. A motley crew of local craftsmen is in the forest to rehearse a play they plan to perform at the wedding of Theseus and Hippolyta.  A weaver named Bottom has the misfortune to attract the fairies’ attention. His head is turned into that of a donkey, and he is set in the path of sleeping Titania. When she awakens, hilarious distraction ensues. 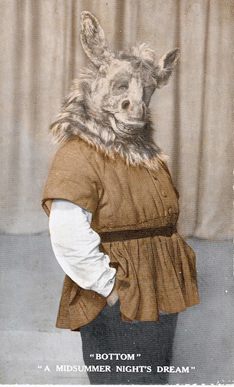 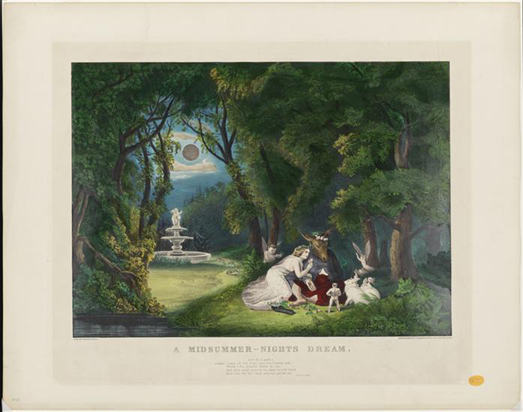 Meanwhile, the mortals are still wandering the forest. Oberon chances upon the smitten Helena and the very uninterested Demetrius. Taking pity on her, Oberon instructs Puck to use the magic flower to awaken amorous feelings in Demetrius.

Puck stumbles on the wrong couple and mistakenly gives the love potion to Lysander who wakes and sees Helena walking through the woods. Attempting to fix his error, Puck also dabs the eyes of Demetrius. Suddenly everyone’s in love with Helena, and Hermia is very confused.

With Lysander and Demetrius now competing for Helena, and the fairy queen enamored of a freakish half man/half donkey named Bottom, life in the forest has gotten quite muddled. Fear not, gentle mortals. Because this is a Shakespeare comedy, everything turns out aright. Puck manages to get the lovers paired, as they should be.

Hermia’s father accepts her union with Lysander because the favored Demetrius now wishes to marry Helena. Titania recovers from the love spell and finds she feels friendlier toward Oberon. And, perhaps most importantly, Bottom gets his normal head back, is reunited with his friends, and is able to perform the play at the wedding.

First performed around 1595, this early comedy by Shakespeare was last seen on Broadway in 1996. To experience your own midsummer night’s dream, check out the Public’s free production currently up at Central Park’s Delacorte Theatre. If you’re more inclined toward air conditioned environs, step inside for Hamlet offered at the Public downtown. Or, if you don’t want to go anywhere at all, TNT summer programs for the small screen include Will, a colorful reimagining of the Bard’s early career.

If we bloggers have offended,
Think but this, and all is mended,
That you have but Googled here
While these visions did appear.
And this weak and idle theme,
No more yielding but a dream,
Gentles, do not reprehend:
if you pardon, we will mend…
Give us your FB likes, if we be friends,
And the Museum shall restore amends.

It has been called the greatest love story of all time; take the opportunity to revisit the romance with a pictorial re-telling from the Museum’s collection.
City Arts Tuesday, July 1, 2014

It’s a sweltering July evening in 1915 and the lights have just come up after the finale of a Ziegfeld Follies show at the New Amsterdam Theatre on 42nd Street. You dread walking out into the muggy night and long for a cool escape. But you’re in luck tonight because it’s the premiere of Flo Ziegfeld Jr.’s new revue, the Danse de Follies!
City Arts Tuesday, August 21, 2012

Peter Pan made his Broadway debut on November 6, 1905, just under a year after appearing for the first time on the London stage. Over 100 years later the boy who wouldn’t grow up can still draw our attention.
See All