The Beheading of President Andrew Jackson

On July 2, 1834, President Andrew Jackson, also known as “Old Hickory,” was beheaded in Boston in what was thought to be a response to the Bank War that had its start in the summer of 1832. You might be thinking I was taught alternative historical facts as a child but it was actually the figurehead of Andrew Jackson on the U.S.S. Constitution that was put to its untimely death.

After sustaining damage during the War of 1812 and disrepair from age, the U.S.S. Constitution was set to be dismantled. The public protest following this decision prompted Jackson to order that the Department of the Navy send the Constitution to Charlestown navy yard in Boston for repair. Her current figurehead, a sculpture of Hercules, was removed as part of this repair. Commodore Jesse Duncan Elliott, the protégé of President Jackson, commissioned a figurehead of the President to replace the damaged Hercules in commemoration of his warm welcome to Boston upon receiving a doctorate from Harvard University in 1833. By 1834 though, Jackson’s popularity among the people of Boston had waned significantly due in large part to his war against the Second Bank of the United States. 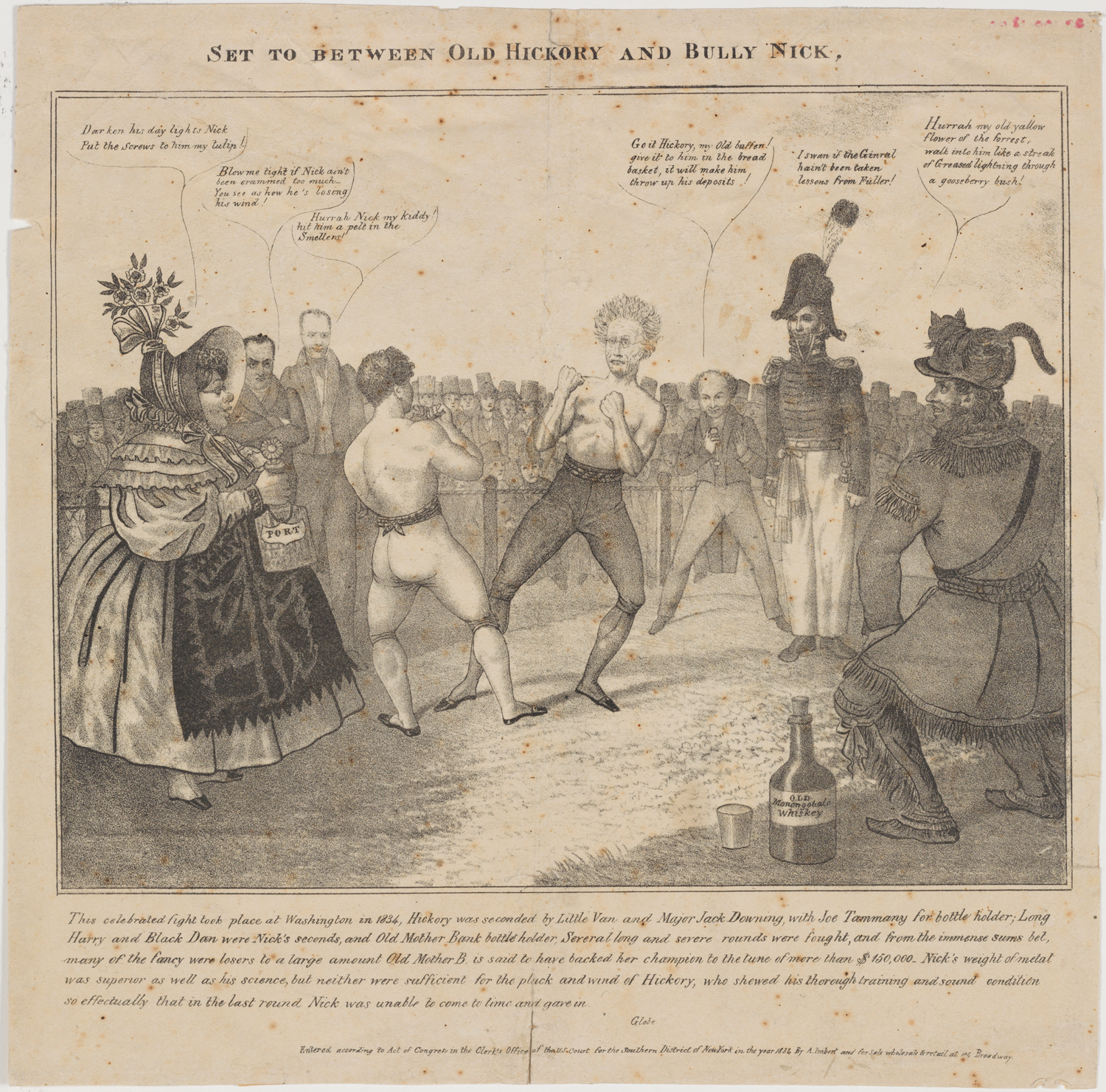 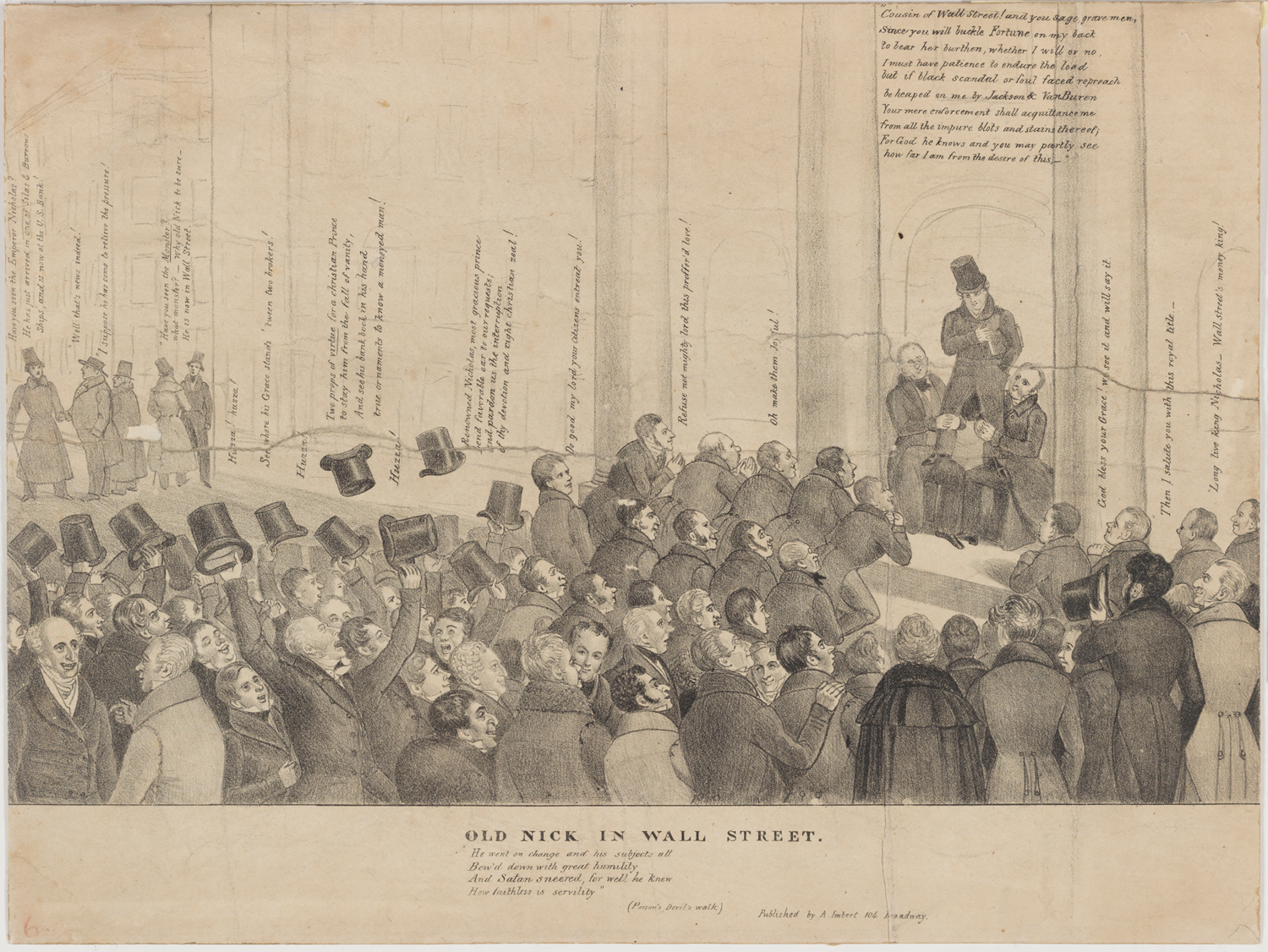 During the summer of 1832, Congress, led by Senator Henry Clay, renewed the charter of the Second Bank of the United States (BUS) formally set to expire in 1836. Jackson promptly vetoed the bill for early charter renewal. As a supporter of the agricultural industry of the United States, Jackson saw the BUS as unconstitutional and an enemy of southern and western farmers by providing financial privileges to the economic elite. In order to reduce the power of the Bank, Jackson ordered his secretary of the treasury to divert federal funds from the Bank of the United States to various state banks. Jackson’s current secretary of the treasury refused, as did the second. The third appointed secretary followed through on the President’s unprecedented orders, effective October 1, 1833.

To counteract Jackson’s plan, the current president of the BUS, Nicholas Biddle, began contracting credit and calling in loans in order to incite a financial crisis and show the need for a central bank. This plan backfired, leading to widespread public outcry and served as supporting evidence for the Anti-Bank Jacksonian Democrats of the dangers of a central bank. This move by Biddle particularly affected the merchants of Boston as many had outstanding credit with the Second Bank of the United States and threatened trade on the east coast.

Laban Smith Beecher completed the over ten feet tall figurehead in April 1834. It was moved to the Constitution and placed under heavy guard, but on the stormy night of July 2, the figurehead was decapitated. It wasn’t until days after the incident that some light was shed on the identity of the executioner. An 18-year captain sailing with the West Indies Company named Samuel Dewey claimed responsibility for the decapitation. The thunderstorm that night helped to conceal his climbing of the ship and removal of the head. Due to a metal rod attaching the head to the body, Dewey sawed off the head below the nose leaving the mouth and chin attached to the body.

Dodge & Son was commissioned to construct a new head for the Jackson figurehead and the Constitution set sail for New York arriving in 1835. The new head was attached to the original body as seen in the image below.

So what happened to the original severed head? After keeping the head hidden for a period of time, Dewey decided to return the dome to its owner, Andrew Jackson himself. Jackson was too ill to receive Dewey so he met with Vice President Martin Van Buren. Van Buren instructed him to take the head to Secretary of the Navy Mahlon Dickerson who promptly tried to arrest Dewey. To Dickerson’s chagrin, there was no law against the beheading of figureheads. Much of the press refused to believe Dewey’s confession as it in no way carried political motivation. There is also little evidence to support his story of beheading President Jackson but the original head and body are now reunited in our collection, just not joined together as they once were.

How the poem that gave us the iconic verse, “Give me your tired, your poor, Your huddled masses yearning to breathe free,” made the Statue of Liberty a symbol of immigration and refuge.
Landmarks Tuesday, June 14, 2016

Towards the end of his career, Alexander Hamilton wrote to his wife, Elizabeth Schuyler Hamilton, about a “sweet project” he was planning, with which she would be pleased.
See All