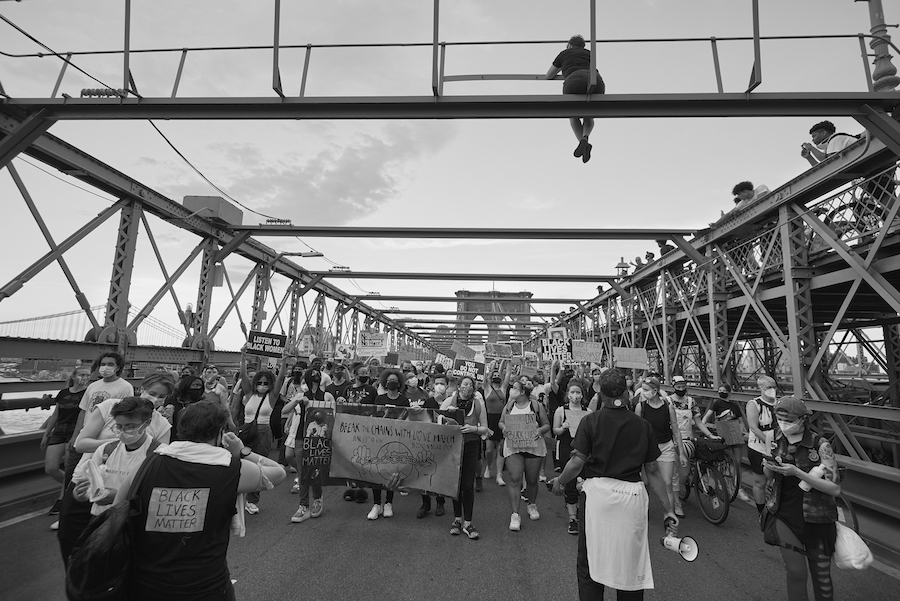 The uprisings against police violence and structural racism galvanized New Yorkers and turned the city's streets, parks, bridges, and edifices into scenes of protest, passion, and sometimes confrontation.

The photographer notes, "This photograph was taken on the Brooklyn Bridge on June 19, 2020. Juneteenth (June 19th) is a celebration dating back to 1865 that commemorates the end of slavery in The United States. The 'Break the Chains' march involved thousands of protesters marching from Brooklyn into Manhattan. The mass of humans moving across the iconic bridge, the single person sitting atop the steel tie bearing witness—I could feel the historical significance of not just this event but all the demonstrations and protests happening in NYC in 2020.”

[The Queer Liberation March for Black Lives and Against Police Brutality] 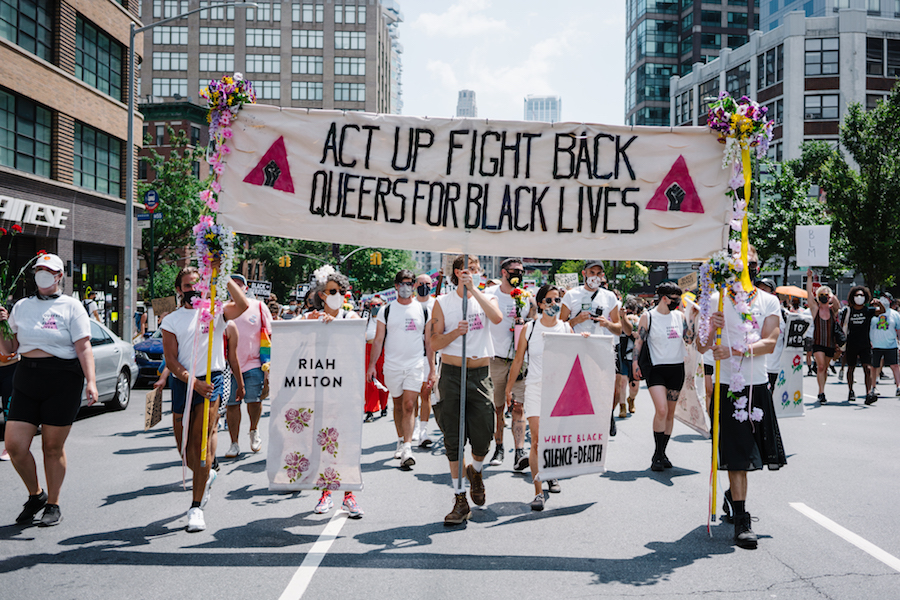 “The image shows the group Queers for Black Lives marching together in the street in lower Manhattan. The fact that everyone in the group was wearing the same t-shirt caught my eye, and the colors of the shirt matched the colors of the banner, which were all white and pink and created a cohesive look to the group. The banner’s decoration, with floral props, made it stand out at the march.” 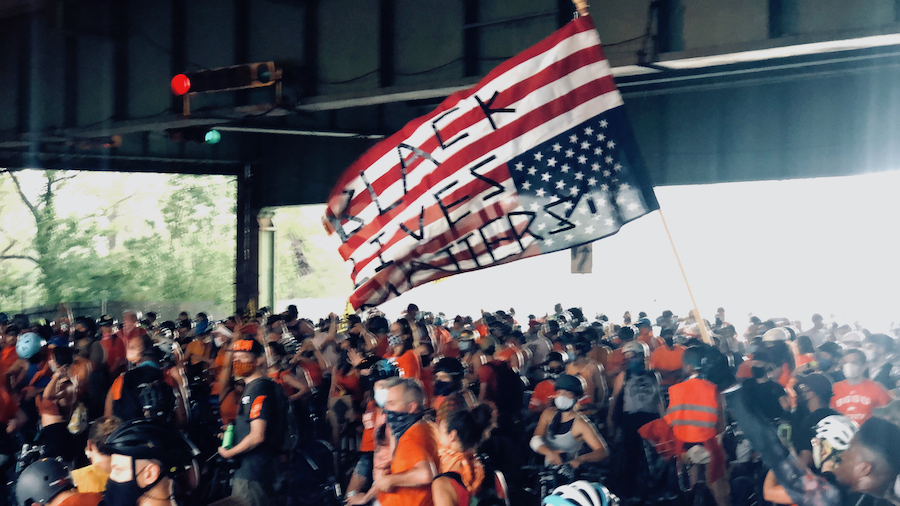 The photographer explains, “As a passionate cyclist and a supporter of the Black Lives Matter movement, I participated in weekly bike protests organized by Street Riders NYC throughout the summer 2020. Justice Ride XII took place on Saturday, August 22 and it started in Bay Ridge, Brooklyn. On our way to Red Hook, we got caught by a heavy rainstorm and escaped under the Belt Parkway in Sunset Park.

“The picture captures the moment when a huge crowd of cyclists was singing to the music of our drum band. Suddenly, one of the participants came into my frame with the US flag and that moment I caught with my camera. It speaks rebellion and upraising, with plenty of electric energy coming from the crowd.

“Altogether, I participated in ten Justice Rides and every one of them was unforgettable! We crossed all the boroughs and neighborhoods of New York City and our music and chanting spread around the whole city. At some of the rides there were 10,000 cyclists biking together in a flow. One more time, the unbreakable and resilient spirit of New York became visible.” 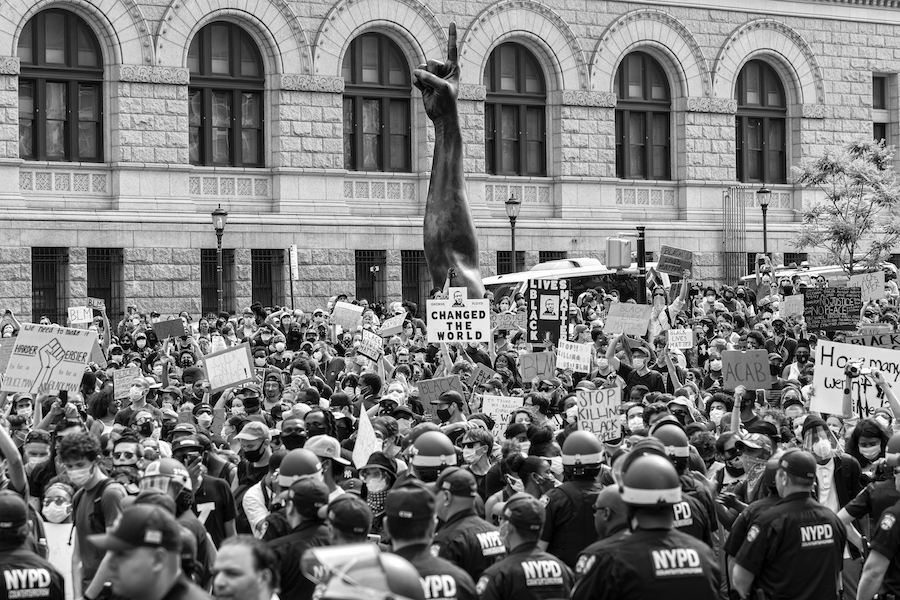 The photographer explains, “A crowd was assembling to walk over the Brooklyn Bridge and into Manhattan and the NYPD was attempting to thwart the crossing by barricading pedestrian and vehicular traffic lanes. I shot the composition because of the compelling outstretched arm statue, titled UNITY by artist Hank Willis Thomas, towering over the mass of protestors.

“Much BLM iconography and expressions of solidarity make use of a clenched outstretched fist; I found this towering statue to be of a similar expression and visually complementary to what I was witnessing in the crowds.

"The pandemic, racial unrest, and the politics of chaos made the spring and summer of 2020 a very anxious period. I’ve been through 9/11, Hurricane Sandy, Blackout, etc., but this was a sustained period of DIVISION. Those other events prompted a UNITY that, apparently, we had now lost.” 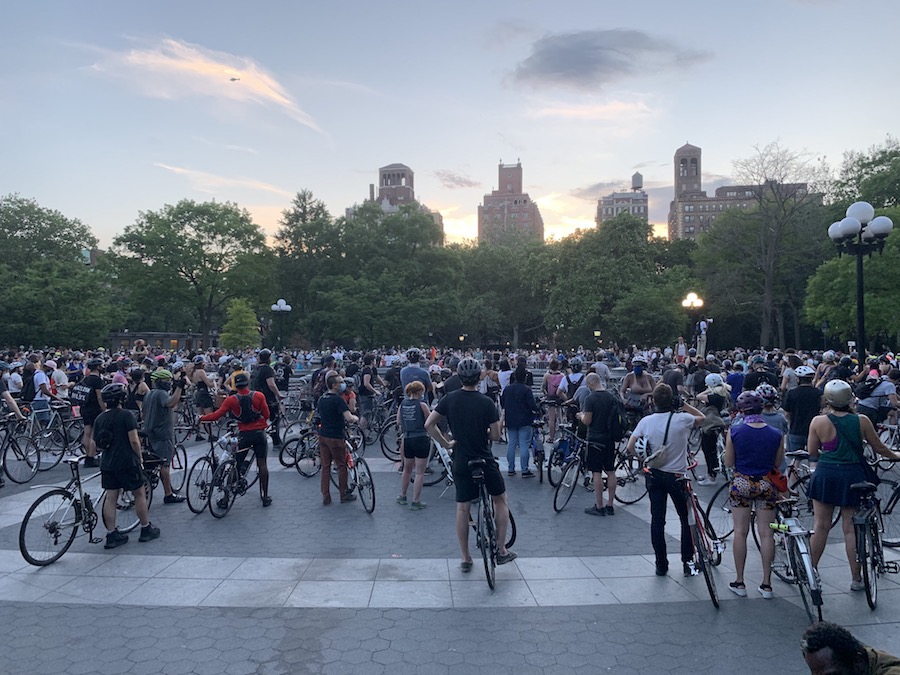 The photographer explains, “This photograph was taken in the early weeks of the BLM protests. I live in between Washington and Union Square Parks. Between these two parks, there was always some kind of protest or rally happening. I have been taking daily walks since the COVID lockdown began, photographing as I walk, and posting my photos on Instagram.

“When the BLM protests began it caught my attention, as I was impressed with how so many people were coming together for a common cause.  As I learned more about the movement, I felt it too is something I can support, and am hoping my photographs help tell the story as it is happening.

“The night of this bike protest, I had gone for a walk after dinner. It was a lovely night.  I saw there was an event at the park. It was dusk, so the lighting was particularly photographic.  The density of the crowd with their bikes, standing quietly listening to the speakers, I thought made a statement, so I stood back and took this photo, trying to capture what was happening.

“I think these ongoing protests bring attention to issues that we, as New Yorkers, need to pay more attention to even if they haven’t directly affected us, but do affect other New Yorkers. We need to support movements that bring communities together and to look for ways to improve the system, and the quality of life for all New Yorkers.” 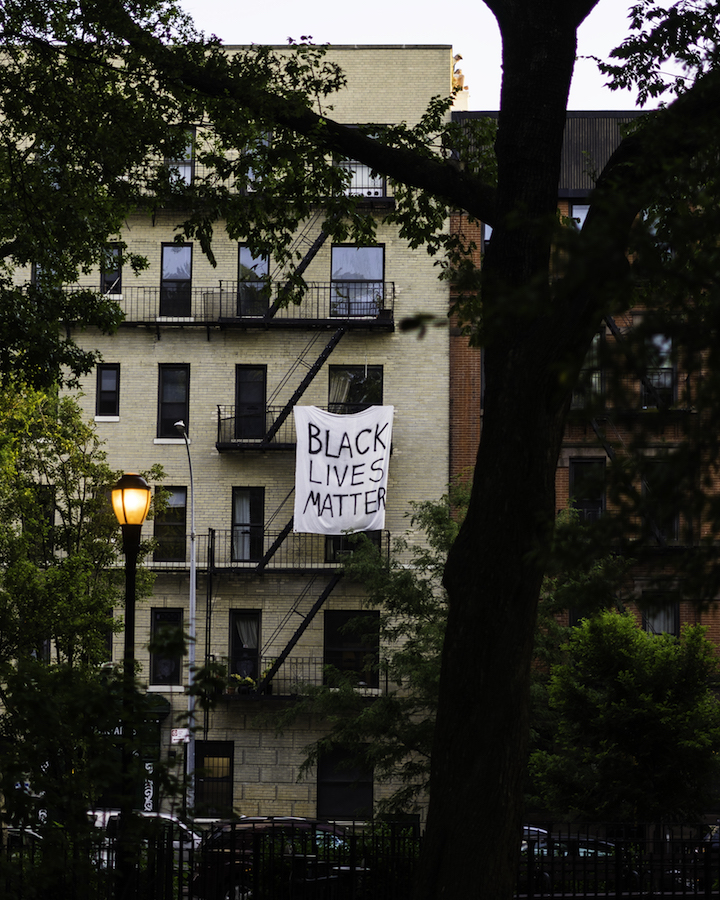 The photographer recalls, “During a protest that started in Washington Square Park and lasted several hours, I noticed the banner hanging over the fire escape of a building near Tompkins Square Park. This reminded me of something you would see during the 60s; the moment felt historic.”

Witnesses captured images of clashes between protestors and police, as well as acts of solidarity.