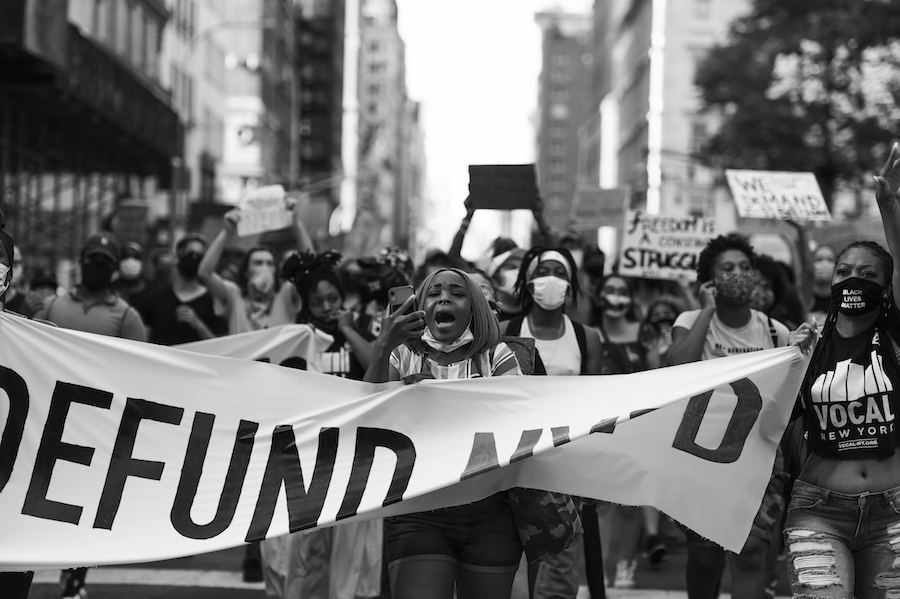 Protests grew throughout the spring and summer, as fury mounted over police violence, over-policing of communities of color, and the use of force against overwhelmingly peaceful protestors. The slogan “Defund the Police” reflected the call to redeploy city resources to education, social services, alternative forms of public safety, and community control, but it was also interpreted as an attack on the NYPD itself. Witnesses captured images of confrontations and violent clashes between protestors and police, as well as acts of solidarity.

The March on City Hall

In the words of the photographer, “This particular march was focused on fighting to defund the NYPD. More specifically, it was a demand to reduce the NYPD’s budget by at least one billion dollars and transfer those funds toward Black and brown community development and social services. While all of that is extremely important, I couldn’t really capture that message in a photo, so I made it my aim to capture the raw emotions of the protestors, revealing the pain they were experiencing as a result of years of abuse at the hands of police officers. That, I believe, speaks to the truth behind the concrete demands of the protestors.

“At a point toward the end of the march, a young woman with dyed hair took front and center behind the banner and started a livestream on social media, broadcasting herself marching with hundreds of others. I noticed her immediately. She was tearfully shouting into her phone, pleading, seemingly, with society as a whole to give her and her loved ones the help they desperately needed to have some kind of reprieve from the adversity they faced on a daily basis. I backed up a bit to fit the whole front line in frame and snapped the shot.

“After sitting on it for a few days, I realized that what makes this photo is not just the emotion on the face of the young woman, but also the phone in her hand, broadcasting the protest to people who wouldn’t have seen it otherwise. That, I believe, is what has separated this wave of national protests from those of the past. We discovered that online virality is a new key to the spreading of a movement, and will almost certainly alter the way we create change in the future.”

The Friction Point Before Change 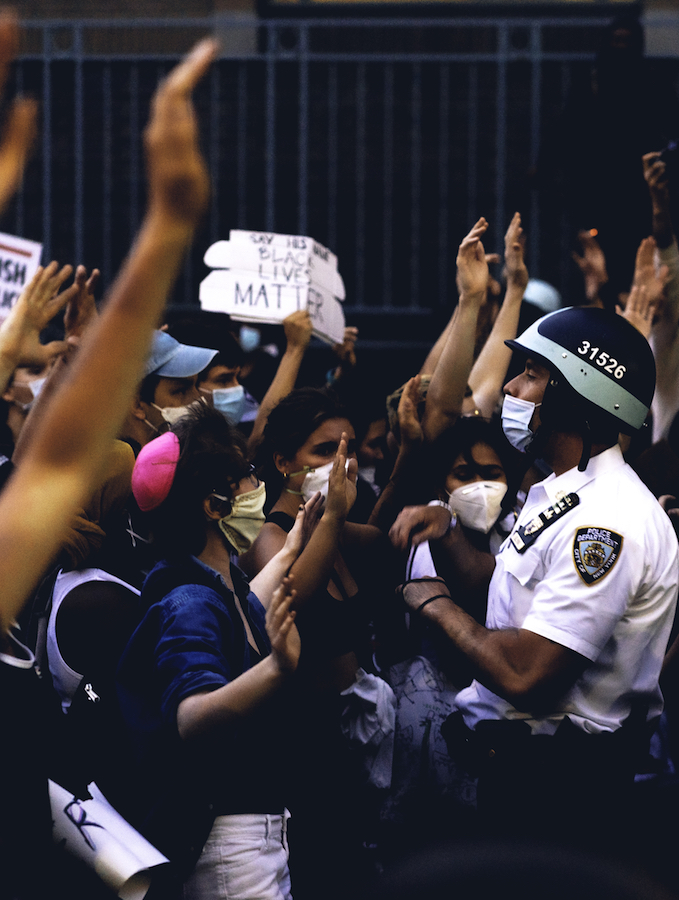 Carlos Rivera
July 17, 2020 (posted to Instagram)
Courtesy of the photographer

The photographer writes, “Saturday, May 30 was the first day of all the demonstrations and observations that would run through the summer and are still ongoing in New York City. After the Brooklyn Bridge was crossed and the sun started to set, police started to mace and assault protestors. I noticed a young woman making her way through and toward the front of the crowd, stand right in the front of the protest, showing no fear while the crowd was screaming/shouting ‘Black lives matter’ and ‘Hands up, don't shoot.’ The scene and image caught my eye seeing individuals standing up for what they believe in, it was something that needed to be documented and shared with the world.”

On June 19th (Juneteenth), Brooklyn Borough President Eric Adams, himself a former police officer, joined together with retired members of the black NYPD officers' association, The Guardians, to demand an end to racism within the force. 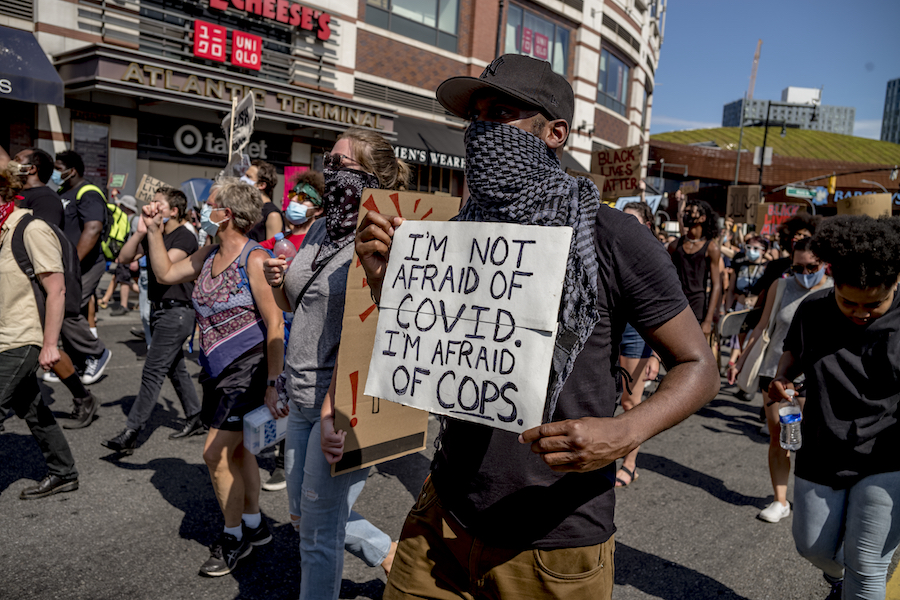 The photographer explains, “For this image, I had decided to stand still and let all the marchers going down Flatbush Avenue pass me and photograph them as they pass by.  Ominously, the sign can be taken as a prophetic warning.

“The ability to photographically cover a protest march is difficult in that people are constantly moving. One cannot ‘set up’ a photograph under these circumstances. As a street photographer, I’m used to photographing people in motion. Contemplating when and who to photograph during these marches is part happenstance, part intuition/instinct, and (to a small part) experience. Past photographic experience is not indicative of any future photographic possibility.

“The experiences of the past six months have shown the importance of this time in history regarding social justice in America. The number of New Yorkers that have shown support for social justice reform has been tremendous.  Many organizers have spent a great deal of their time and efforts to keep the momentum going. During the rallies, they always implore all participants to keep up their individual efforts to enact social change. The movement continues. There’s more documentation and history to be made in the coming months and years.”