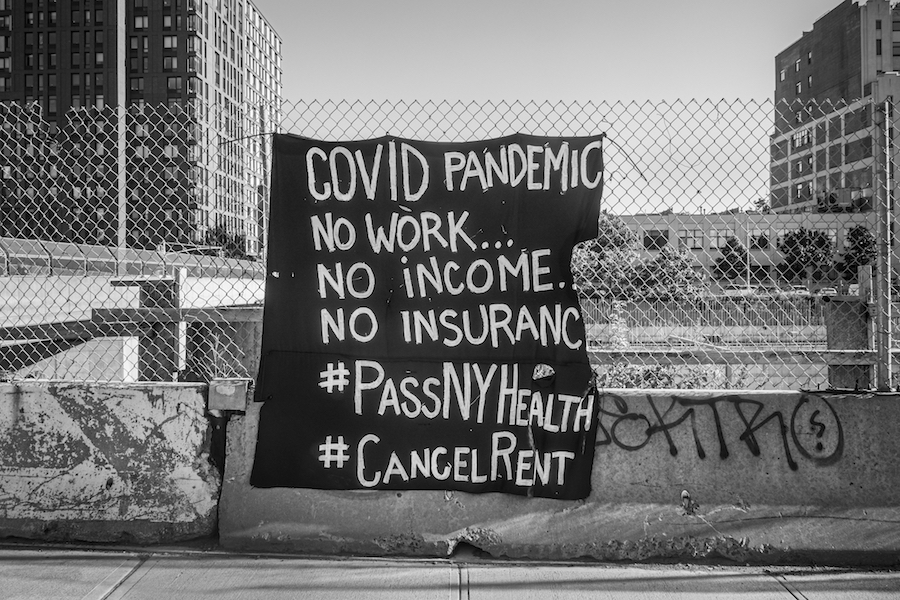 Like the anti-racist uprisings, the COVID pandemic exposed and amplified existing social and economic inequality in the city. Loss of life and livelihood hit communities of color hardest. Many photographers caught the effects of the pandemic on economic security, housing, and health. They highlighted vulnerable populations such as incarcerated, homeless, or rent-burdened New Yorkers, as well as their movements to demand and work for a more just future.

"Portrait of an Unknown, living invisibly, life on the streets." 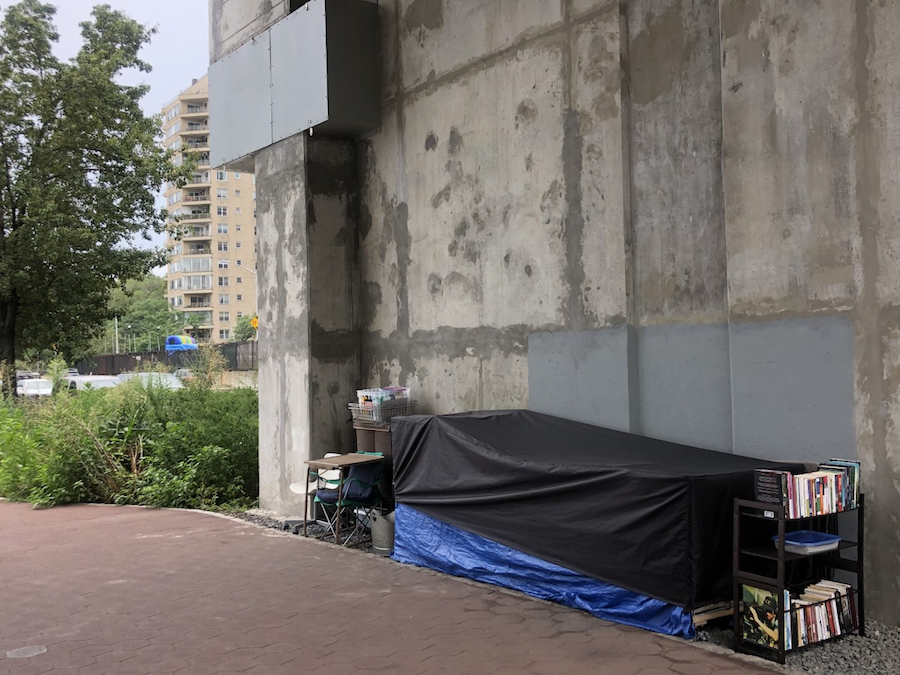 COVID-19 presents a particular threat to people suffering homelessness. As the Coalition for the Homeless explains, homeless New Yorkers have higher rates of underlying health problems, generally have less access to quality healthcare, and have no way of self-quarantining. The closure of the subways overnight also drove many unhoused New Yorkers into the elements, making them more visible in the streets. And, as the maker of this photograph notes, the inequality of the pandemic and its economic effects along with the racial justice uprisings raised many people’s awareness of the situation of the most vulnerable.

The photographer writes, “This image was taken on the East River Promenade going towards Randall’s Island. I grew up in New York City in the 1970s and saw the suffering that our cities endured during those difficult economic times. I was interested in the setup of this unknown stranger who had bookshelves filled with a diverse erudite literary selection, with titles like Why Courage Matters by John McCane Hegel on Self Consciousness The Obstacle Is the Way and Nickel Boys. Everything was neat and well organized, with two chairs inviting company or conversation.

“This year has been filled with such moments of awareness by many. Finally, we are facing the imbalances and injustices in our society and looking closer to the things that happen, that shouldn't. We are shaped by our circumstances and the things we can and cannot control. This photo is a portrait of one who is ‘living invisibly’ in plain sight and reminds me to slow down, question, and see the humanity in the individuals. Just as at the protests, we remember to 'Say Their Names.'

“We must look deeper at our responsibility for our society and the things we allow to happen.” 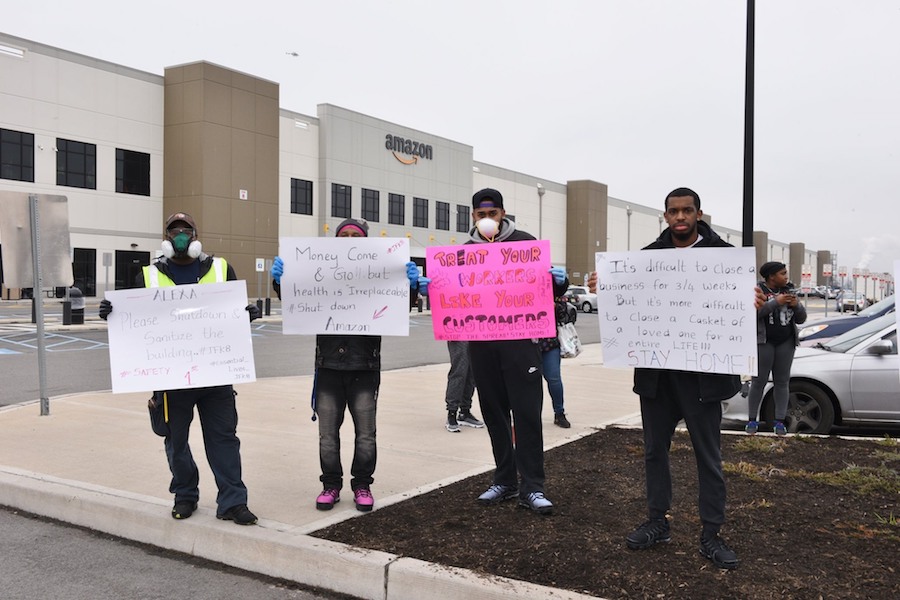 Groups of workers at the Amazon warehouse on Staten Island launched multiple protests during the pandemic, as multiple employees fell ill with the disease. Amazon spokespeople argued that the company had invested significant sums in safety measures; the workers argued that these were insufficient for people who were doing essential work.

No Work, No Income, No Insurance

For many activists, the issue around the pandemic, the economy, and health care were deeply intertwined.

The photographer explains, “I was on my way back from photographing a Black Lives Matter protest and saw this banner hung along Atlantic Avenue for drivers and pedestrians to see.& It immediately caught my eye and summed up much of what is important to New Yorkers now. COVID has highlighted how gentrification and wealth have created poverty and how many people live on the edge. Health care should be a right for all and not dependent on how much money you have or whether your job provides it.”

[Protester with "Shut Down Rikers" sign at Occupy City Hall] 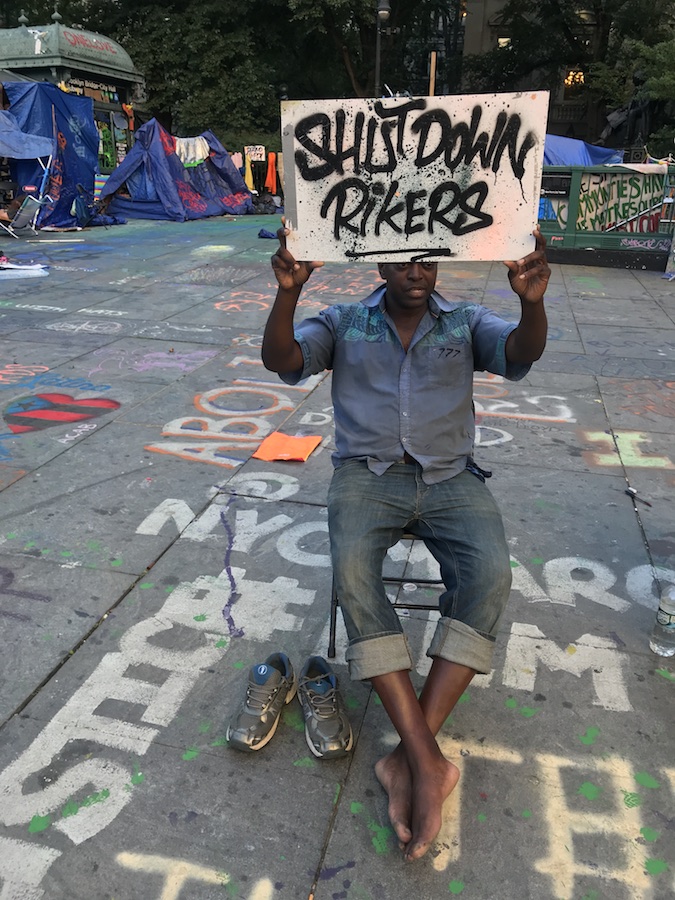 The long-running movement to shut down the jail at Rikers Island gained energy during the pandemic since both prisoners and staff were at particular risk of contracting COVID. Rates of infection at the jail were nearly four times higher than among New Yorkers at large. Beginning in March, the City began accelerating the release of people held in New York jails, with the total jail population dropping by more than a quarter in 10 weeks, bringing it to the lowest level since 1946. Still, activists point out that COVID rates continued to be extremely high at Rikers and other city jails, making them the epicenter of the epidemic.

The photographer writes, “I remember walking around City Hall Park at the time I took this photograph. This was towards the end of #OCCUPYCITYHALL, a short-lived protest to defund New York City Police Department.

“The man wanted passersby to see his sign that read 'SHUT DOWN RIKERS". There were many protesters with signs, but this particular one stood out from the crowd as the man holding the sign seem to want to be photographed. So I was able to take as many pictures as I wanted, thus getting a photo that made the meaning of the protest very clear.

“I believe this photograph shows the intensity of New Yorkers wanting police reform and New Yorkers taking direct action to make sure those reforms are made. In the time of the COVID-19 pandemic, the continued occurrence of police brutality in minority communities made New Yorkers head to the streets to demand from the city government and the whole United States that racial injustices in all its varied forms must end.”

NY Responds looks at how street art took on a special urgency during the events of 2020.