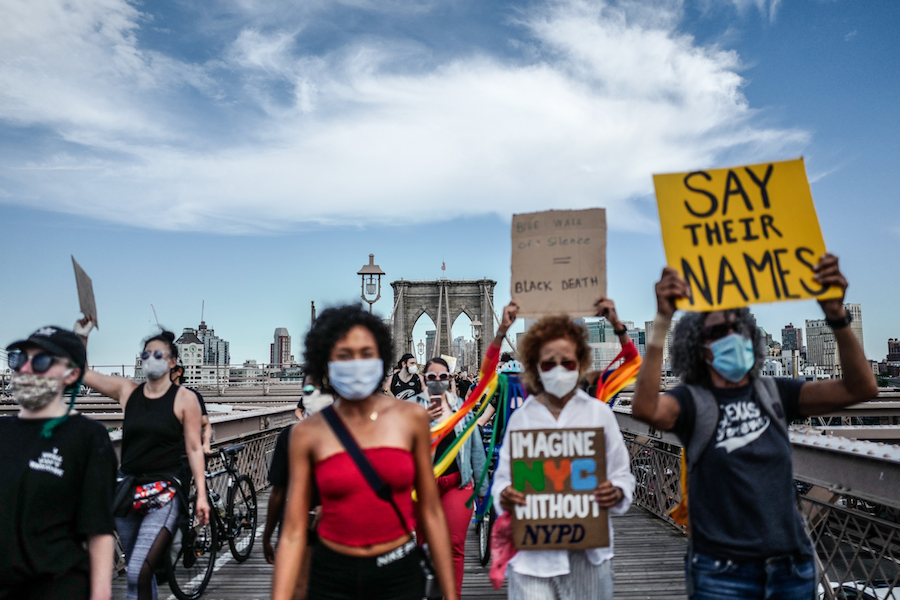 Following the killing of George Floyd in Minneapolis on May 25, protests against police violence and systemic racism broke out across the country and around the world. Thousands of New Yorkers captured images of this mass Black-led uprising, from Occupy City Hall to marches across the Brooklyn Bridge; from Staten Island’s Black Lives mural to the Bronx’s Joyce Kilmer Park. These protests built on generations of anti-racist organizing in New York. Learn more about this history and the Movement for Black Lives in the Activist New York gallery on the Museum’s second floor.

[A teacher at a Black Lives Matter march] 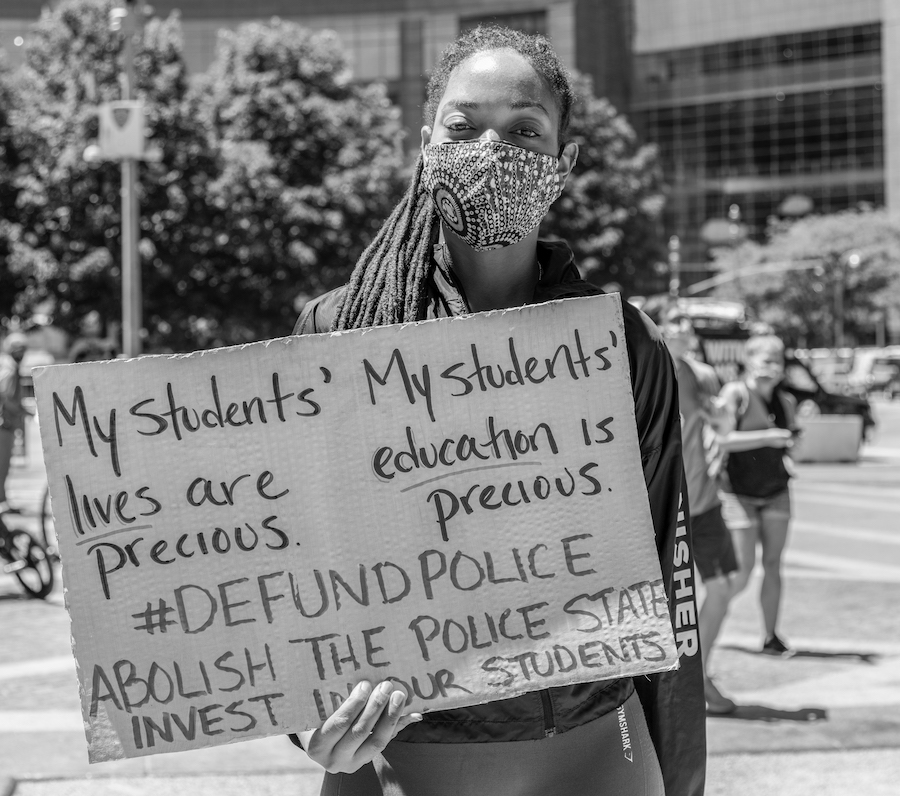 The photographer writes, “This young woman is a school teacher who was protesting at Columbus Circle, fighting for change for her students—the next generation. Her eyes are so soulful, and her commitment to her students is so apparent.

“The lockdown during COVID, the awareness of racial inequality and systemic racism, and the stress of the election all coalesced to bring the city together in ways that I believe were unprecedented. I was able to photograph many Black Lives Matter protests and meet so many New Yorkers who were intent on effecting real change in our society, all while maintaining proper safety protocols in respect to the raging pandemic. In many ways, this very difficult time often brought out the best in us.” 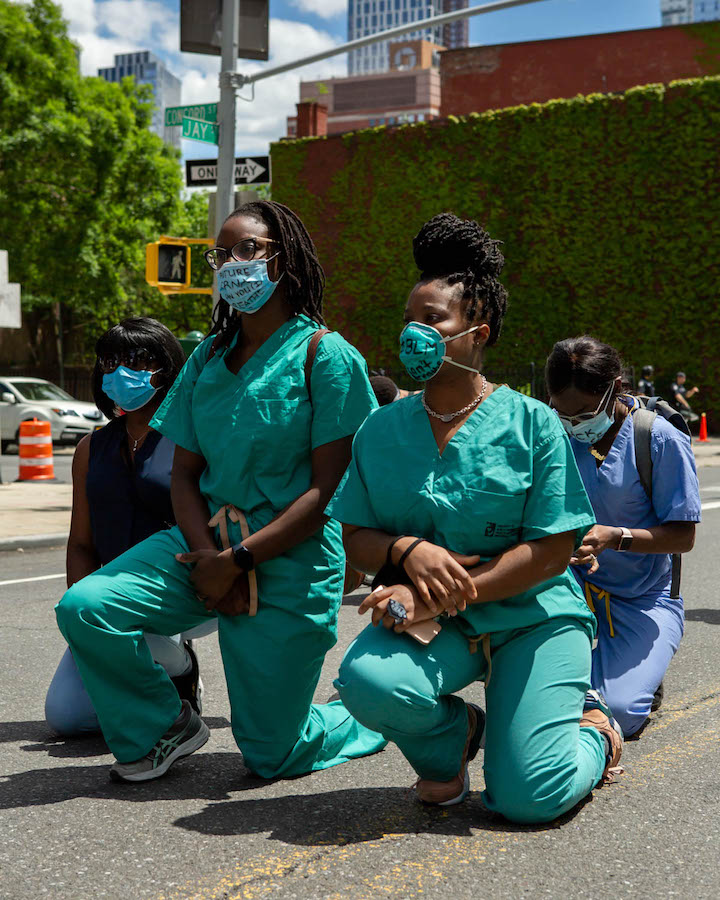 The photographer writes, “New York's healthcare workers, overtaxed because of the demands of the COVID pandemic, took time out to be part of the protests against American injustice toward Black lives. The healthcare workers marched in solidarity from Union Square in Manhattan to the Barclay’s Center in Brooklyn. They made periodic stops along the way ‘taking the knee’ to show unified respect for those that had lost their lives as a result of these injustices.

“A moment of silence for lost lives by those who save lives.” 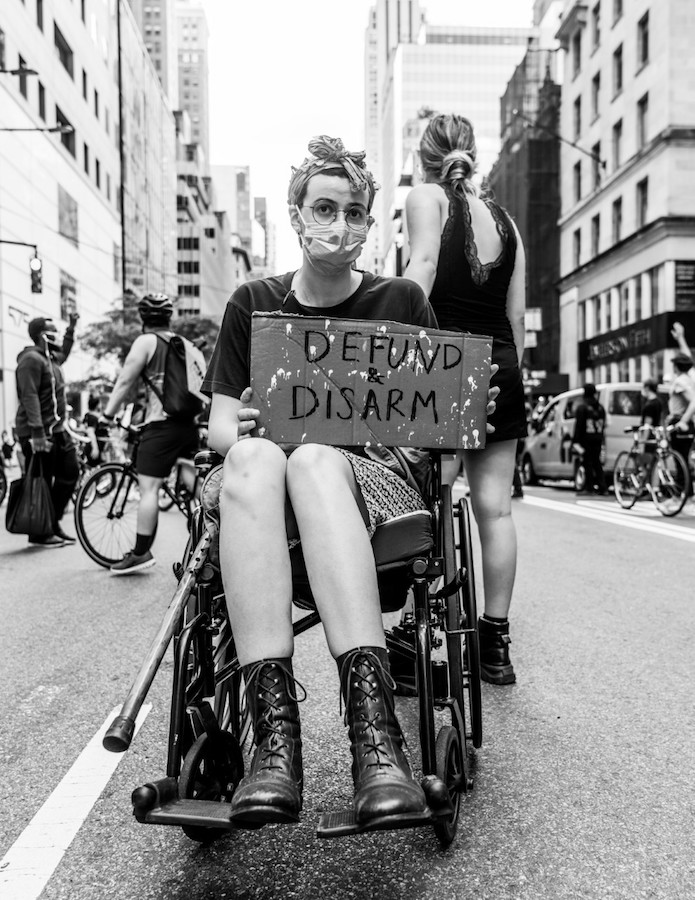 The photographer writes, “This image was taken on Fifth Avenue in the heart of the Diamond District during one of the many Black Lives Matter rallies and protests in the city. Amidst the palpable energy of the crowd and the extremely vocal marchers, a lone figure sat quietly. She was masked and holding a sign that clearly stated her belief and purpose for participating in the Black Lives Matter rally. She was intent on allying herself with the growing call to defund and disarm law enforcement. This is a movement rooted in the central tenet of divesting funds from police departments and reallocating them to non-policing forms of public safety and community support, such as social services, youth services, housing, education, healthcare, and other community resources.

“In deference to her poise and commitment, all I could think to do was kneel and photograph her in a position that conveyed her power and strength of will to demand change and social justice despite the obstacles she herself faced.” 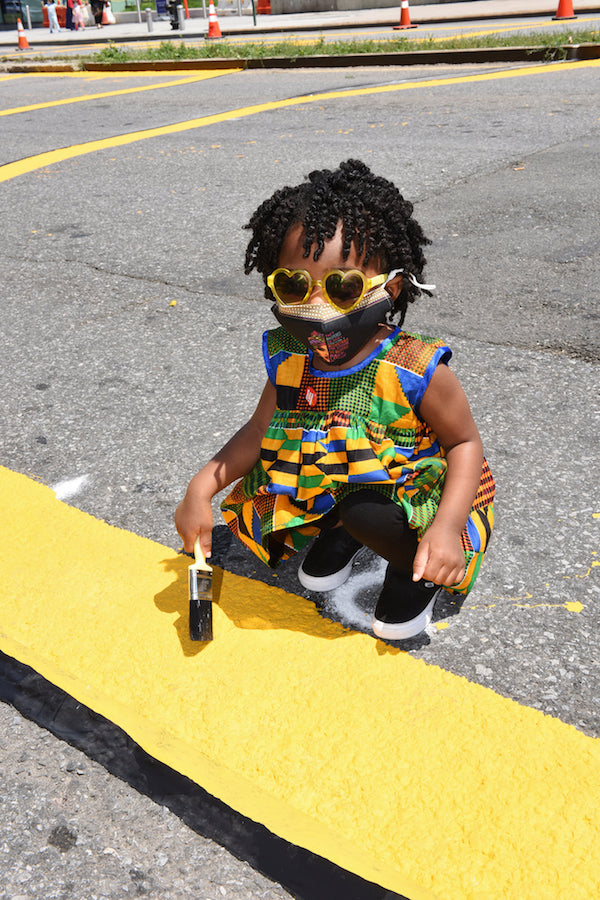 This child was just one of hundreds who gathered to paint "Black Lives Matter" in enormous letters across Richmond Terrace in Staten Island in June, the second such mural to be created in New York City. As of August, there were eight BLM street murals in the five boroughs: three in Manhattan, two in Brooklyn, and one each in the Bronx, Queens, and Staten Island.

June 19th marks Juneteenth, originally a 19th-century African-American holiday celebrating the end of slavery in the United States. In June, Mayor de Blasio made the day an official holiday for the city; Governor Cuomo extended it to the state in October. In this year of racial uprisings, Juneteenth marked a day of especially widespread protest and commemoration of Black lives lost to police violence.

In the words of the photographer, “This image is the last in a series of four taken on a day where I encountered and joined three protests. Suddenly only women filled the frame: the colors of their outfits and the letters caught my eye, as well as the fact that, as they walked, they became aware of me and were smiling at me under their masks. On that day, as in all the BLM protests during the summer, I basked in the sense of connection—both mine with the crowd and the one I sensed among subjects, like here, where the three appear to belong to different demographics—maybe friends, maybe sisters, maybe a mother and daughter. As we marched, we were all chanting, and step by step the bridge came into focus and their shapes went out of focus: they seemed to blend together, and I with them.

“The closeness and sense of belonging I felt during the protests of 2020 was invaluable currency after months of physical and emotional isolation. Here the monumentality of the Brooklyn Bridge adds a spiritual aspect to the scene and the resulting image relates to history, on the one hand, and to my personal story, on the other, as someone who grew up in the shade of churches and monuments: the women hold their signs and credo like ancient priestesses bearing insignia; the crowd reminded me of a sacred procession, like the ones I followed in the south of Italy that end inside a basilica, modern embodiment of a temple.

“As an immigrant and as a photographer, it is precious, humbling, and sublime to have those moments of recognition in which I feel the different parts of myself integrate and at the same time I am able to honor other humans, commune in one meaningful cause—and go with the flow.” 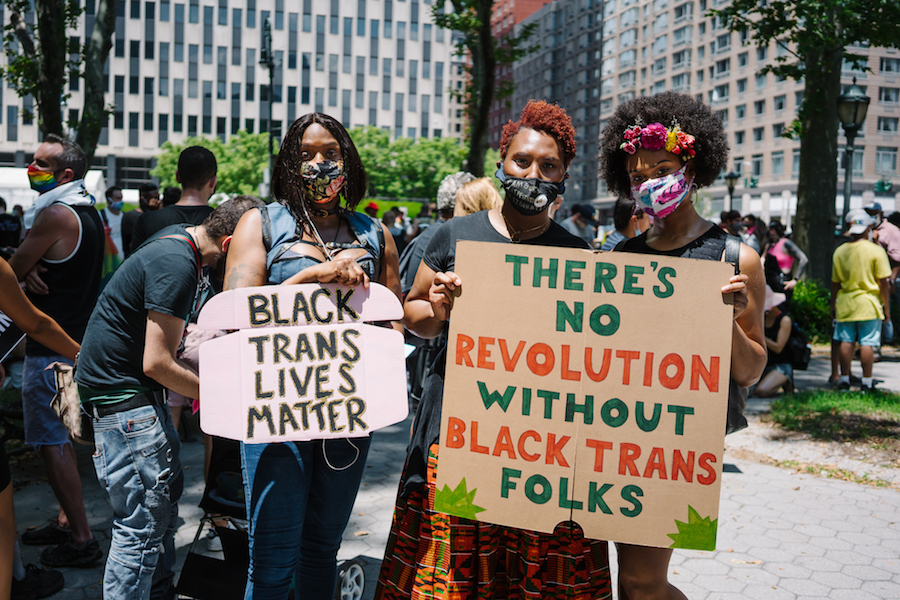 The photographer notes, “The person on the very right of the photo is Raquel Willis, a Black transgender activist, award-winning writer, and media strategist. I had seen Ms. Willis speak just a week before at the Black Trans Lives Matter rally in Brooklyn that drew over 15,000 people to the streets.” 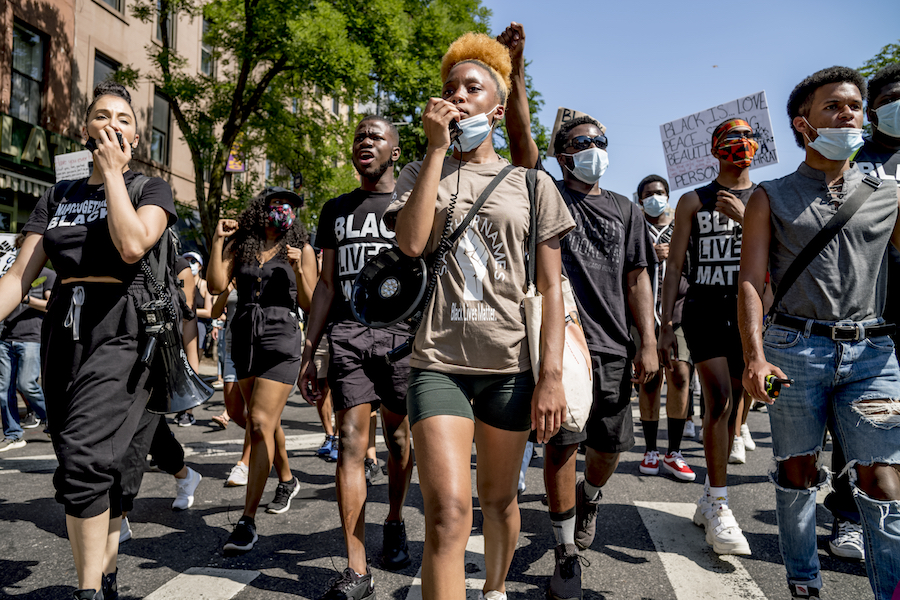 In the words of the photographer, “I’ve been documenting the protest rallies and protest marches of the Black Lives Matter movement (when and where possible during the coronavirus pandemic) in New York City in reaction to (and since) the death of George Floyd.

“This image details the marching part of a protest rally and march held on June 19, 2020. June 19th holds particular interest to the Black community, for whom it’s known as Juneteenth. The march began with a rally at Grand Army Plaza and ended two and a half miles away at Cadman Plaza in downtown Brooklyn.

“This image shows the organizers and rally participants with bullhorns as they approached Flatbush Avenue and Fifth Avenue in Park Slope. Marching chants included ‘Black Live Matter,’ ‘This is what community looks like,’ ‘The people united, will never be defeated,’ ‘Say his name/George Floyd, Say her name/Breonna Taylor.’ As the marchers were in motion, I began walking backward in order to face them and held the camera at a low position (about knee height) to demonstrate the energy that was being exhibited by the group.”

Witnesses captured images of clashes between protestors and police, as well as acts of solidarity.