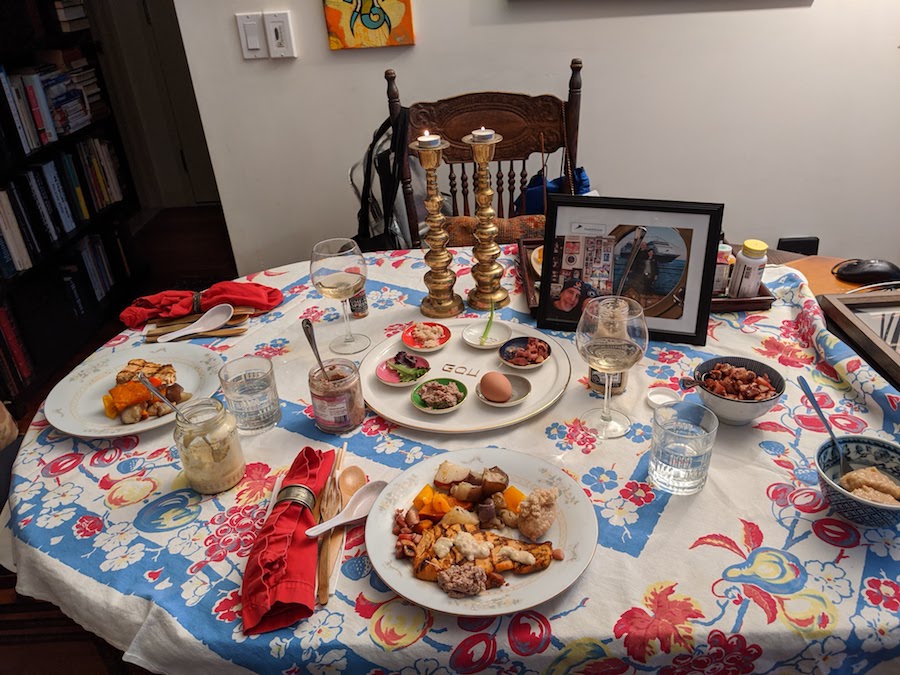 The city’s lockdown forced most New York families into small residential quarters; work became exclusively remote for many; people invented new ways of being together and apart. Some of the city’s wealthier residents left town, but from large apartment buildings to tenements, from nursing homes to row houses, the rest sought creative ways to cope in place. Keeping healthy, connecting with loved ones, and avoiding boredom became tools for sanity amidst the tragedy. 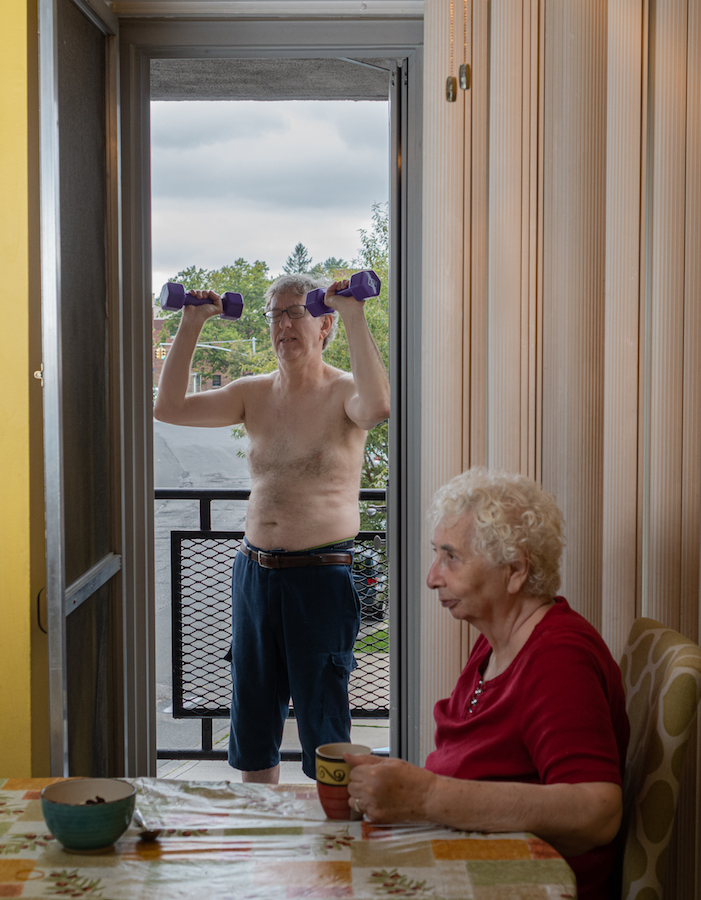 The photographer explains, “This photo was taken on August 15, Day 150 of quarantining in Queens with Sophia, my ex-wife, and Elaine, my mother. With gyms shut, many New Yorkers struggled with finding ways to exercise while at home. You didn't have to be Dr. Fauci to know that lack of exercise combined with too much stress and eating too many pretzels was as bad for your mental health as your physical health. Sure, there were hardy New Yorkers who kept up with their Peloton training, but that was not our family.  Even though it was summer outside, we were afraid of exposing my 86 year old mother to COVID-19. We were gaining weight.

“By August, I decided to dust off my old eight-pound dumbbells and start an exercise routine on my apartment terrace. My mother, watching Netflix, was not impressed by my show of strength. Man, was I out of shape.”

He posted the image on Instagram with the caption: “After getting positive reviews of my legs in a photo I showed on social media, I decided it was time to improve the upper half of my body during this pandemic. But as much as I tried to get attention from the women in the house, they were more interested in watching Outlander on TV.” 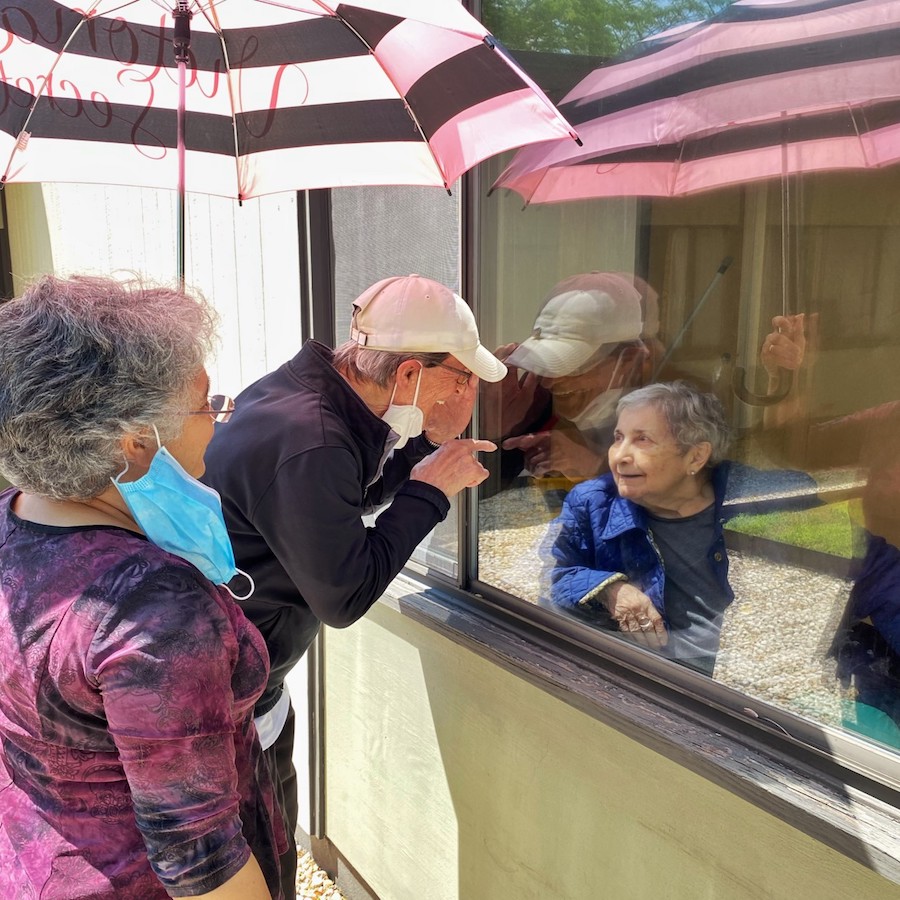 “My mother-in-law, Letty Ramirez, had fallen a week or so before this photograph was taken.  To gain strength, she was transferred from the hospital to a rehab facility in Queens in the height of the pandemic.  It was a multi-story facility and the family was unable to see or visit her.  Her daughters worked diligently to move her to single-story facility, where we could see her from outside her room.

“This image was taken on a visit by her daughter and husband trying to cheer her up.  It is the last image taken of her before she passed away.  We fought to have her released into our care and we were successful in spending a few weeks with her at home before she passed away.  This story, like others during the pandemic, was one of separation but unlike others ended in togetherness.”

[A bar cart on a fire escape, the ultimate "fireescapism"] 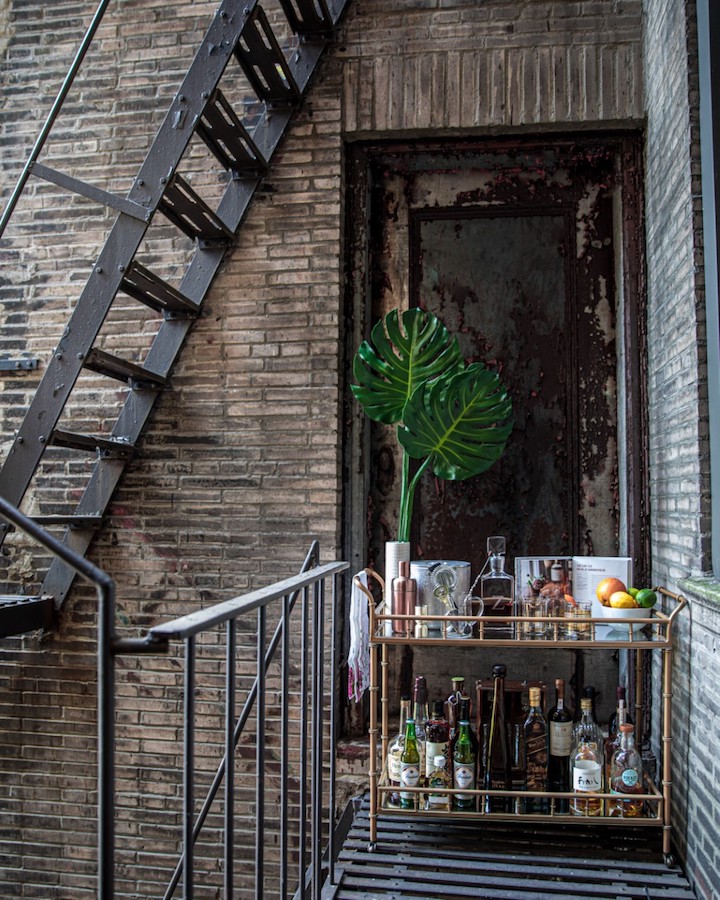 The photographer writes, “I remember it being a sunny, balmy Sunday. It was only noon, but at this stage of the quarantine, time felt frivolous at best and held no barometer for social norms. A Mexican Old Fashioned was where we needed to be, to exist in. I walked out on my fire escape—since I’m on the fourth floor it’s a decent view—turned to my husband and said ‘We should bring it outside.’ He nodded yes, and so I began constructing.

“The weather was simply delicious that day and while I wanted to enjoy a summer day in New York City, I took the quarantine seriously and needed to feel like I was somewhere else. I believe that weeks before, Mayor de Blasio had opened some streets and parks to the public, but the risk of buying a drink and walking around the city was still too high.

“The fire escape had become my sentimental refuge. We have no outdoor space and the outdoor felt clouded with the noises and smells of grief. My fire escape was a doorway to fresh air and creative possibilities. Having the bar cart outside felt freeing and reeked of privilege at the same time. Creating spaces for myself to get lost in was something I didn’t take for granted.

“It’s the battle of staying in or going out, risk versus reward—that single-minded conversation that happens in the minds of all New Yorkers every day, that I don’t feel happens in other states. I speak to family in other states and it was not as palpable, malls were open and their lives, while altered, weren’t changed like ours were in the city.” 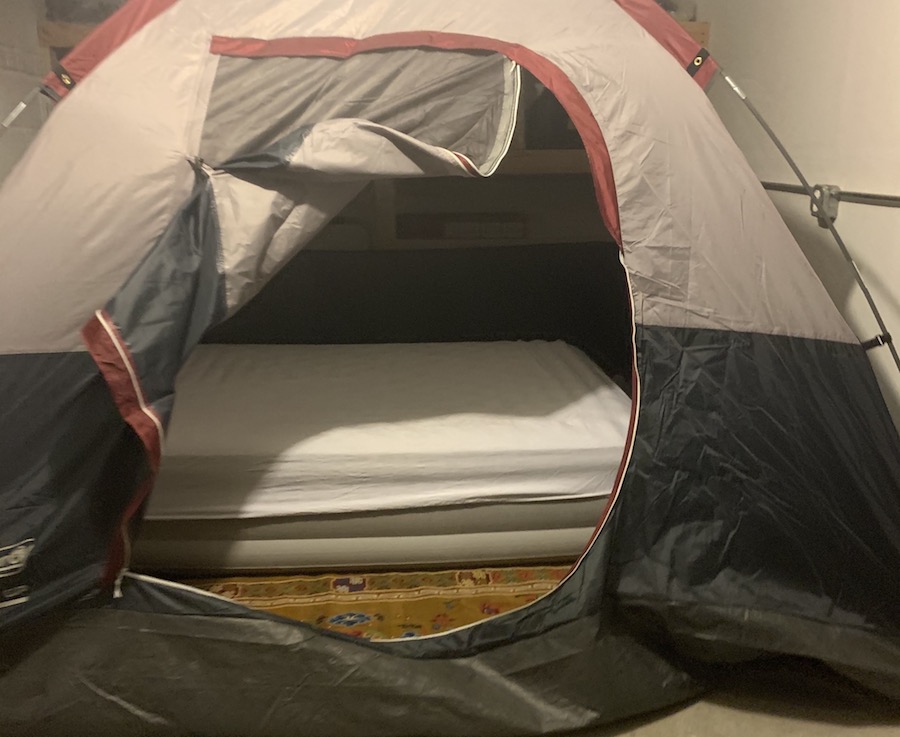 The photographer posted this image with the explanation, “What can you do with a camping tent? I used it to make a quarantine space for my brother who started going to work after quarantining with us for a little over two months. As for me, I didn’t even step out of the house since March 15th. But it’s been fun staying at home since I get this very bad spring allergy when I go outside at this time of the year. Also, as a graduate student, I have enough school work to keep me occupied and not get bored of staying at home. Sending some rainbows to my fellow Queens residents and New Yorkers from Corona, the epicenter of the epicenter!”

After Governor Cuomo’s executive order which went into effect March 22, 2020, New Yorkers were largely instructed to remain in their homes. As people sought new ways to entertain themselves, The New York Times published instructions on how to make a "coroñata"—a piñata in the form of the coronavirus—inviting people to "join the crafting renaissance and cope at the same time."

The maker writes, "This piece dates to May, a time when spirits were low and so much was uncertain. My brother, Zac, sent me a link to The New York Times article that provided instructions and said that we should make it together.

It ended up taking longer than expected, but the family persevered and took on different roles. My dad got candy and other supplies. Zac cleaned and ripped newspaper. I took the lead on crafting and engineering it. It was made using a blown up balloon, strips of newspaper, a flour and water mixture as the 'glue,' red tissue paper, and string.

After quite a few days, the time came to hit it. Though, due to it being homemade, it broke on only the second hit, which was disappointing but understandable.

This COVID piñata represents the frustrations that Americans felt (and are still feeling to this day), the boredom and taking on of new projects, and the desire for spending family time together with all the challenges that result. Piñatas are also reminiscent of summer and happy times, but during this time, the parks were overcrowded, and being outside posed a great risk and significant stress. The piñata, thus, represents how close yet how far away the outside was."

However, it should be noted, that the ability to even have time to do a project like this and make a piñata to give yourself a fake “vacation” shows a great amount of privilege that not all NYers had during this time. It represents the difference between being 14 floors up and working on a passion project with your family and risking your life, exhausted, working at the checkout register from where the flour and balloon were bought.

Empty streets and playgrounds, the wailing of ambulances, a life lived at a distance: COVID ushered in a “new normal.”