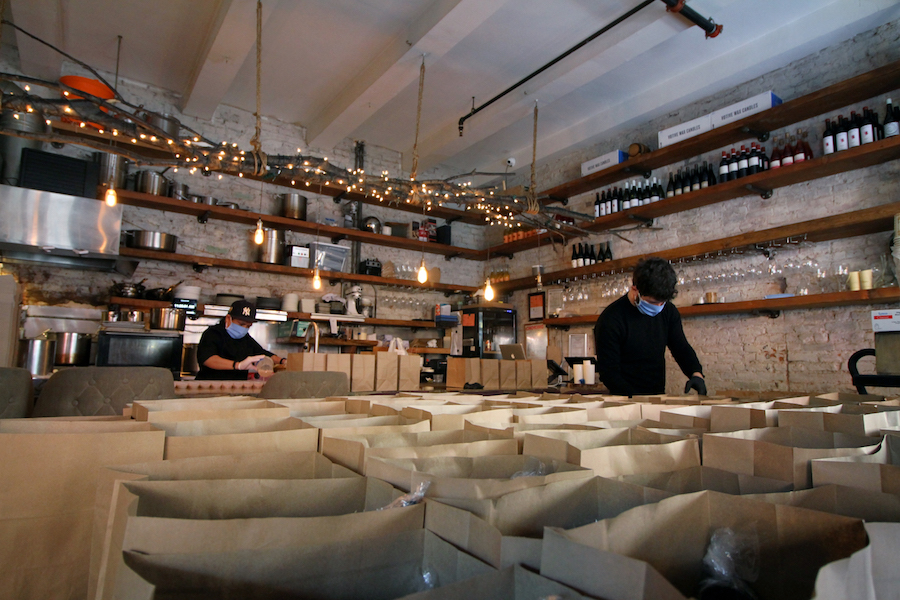 For the New York restaurant industry, which operates on thin margins against a landscape of stratospheric rents, COVID-19 was catastrophic. Lockdown orders in early spring put some restaurants out of business, while others pivoted to providing food relief and improvising innovative systems for socially distanced takeout. In the summer months, inventive programs to support outdoor dining provided a lifeline, giving a new look to the streets that drew the attention of photographers.

[Jeepney has remained open since Phase I, feeling the full impact the pandemic] 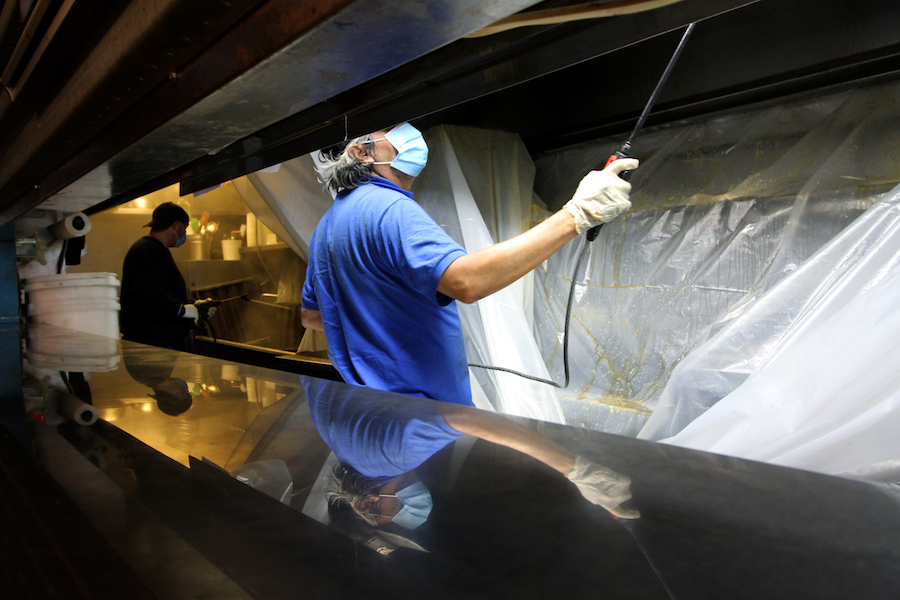 Rose Gold (Rosalie Garlow)
March 14, 2020
Courtesy of the photographer and The Reservation Project

Restaurants and their workers were particularly hard-hit by the pandemic. Three days after this photograph was taken, restaurants in New York City were closed for dine-in service. By the end of March, as Hunter College reported, restaurant spending in the city had dropped by 90 percent from 2019 levels.

The photographer explains, “Jeepney in the East Village was among a handful of restaurants to remain open during Phase 1. The Reservation Project has captured and documented the hospitality industry’s fight to survive as they face substantial pitfalls, including the complexities of the Paycheck Protection Program, reduced capacity, lost revenue, layoffs, the possibility of another shutdown, and more.” 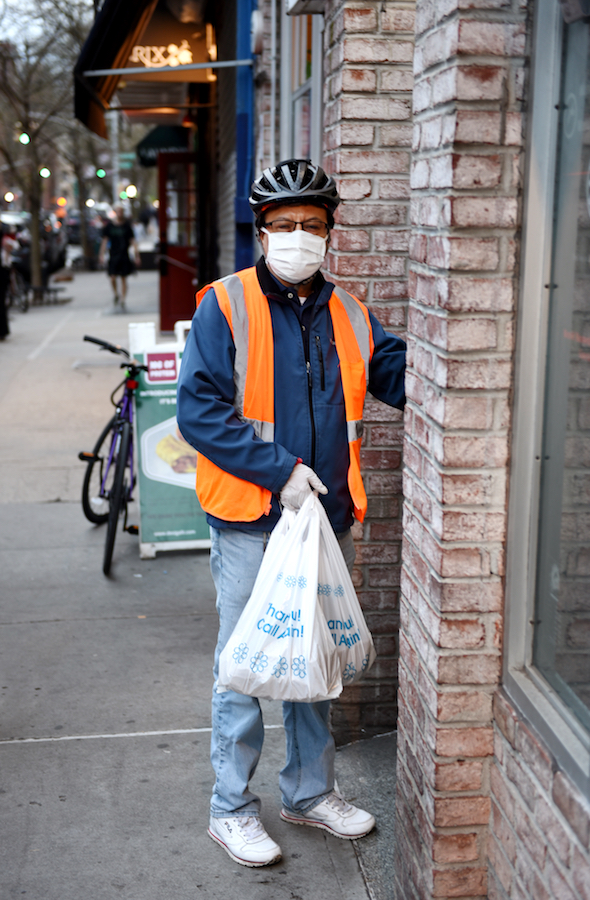 Home delivery—whether of food or other products—was a critical lifeline for New Yorkers during the stay-at-home phase of the pandemic. Countless delivery workers, many of them immigrants working for delivery apps, became known as “essential workers,” literally putting their own health on the line to bring other people what they needed—and to put food on their own tables at a time of widespread unemployment.

The photographer explains, “I made this photo in passing during the first week of the New York lockdown. At that point, nobody knew how the virus exactly spread and what was dangerous and what wasn’t. Was it safe to go into the supermarket or walk by other people on the sidewalk? Many people were afraid to go out at all. Food and supply delivery skyrocketed. Delivery people played a crucial role in getting the city through this period.”

Rose Gold (Rosalie Garlow)
April 25, 2020
Courtesy of the photographer and The Reservation Project

Although they and their workers were struggling, many restaurants mobilized their knowledge and infrastructure to provide food for healthcare workers and those affected by the pandemic. They delivered meals to hospital workers and made free food for neighbors, furloughed restaurant workers, and others in need. Some also raised money for nonprofits like World Central Kitchen, which in turn helped to support New York restaurants by buying meals from them for free distribution to those affected by the pandemic.

The photographer writes, “Avant Garden in the East Village prepared and delivered free meals for frontline workers during Phase 1, while also providing free takeout lunch for patrons. It is the generosity of businesses like Avant Garden that has kept a sense of community intact during a time when the hospitality industry is fighting to survive.” 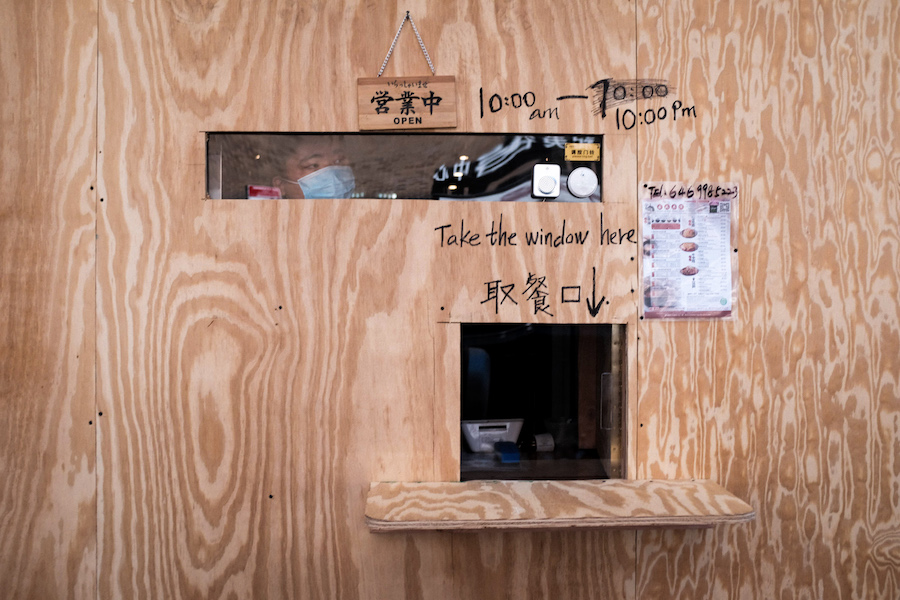 The photographer writes, “This picture was taken in front of Yunshang Rice Noodle House at 53 Bayard Street in early June. I was photographing in Chinatown as I often do. During the pandemic and lockdown I knew a lot of restaurants and small businesses in that neighborhood were struggling, so I would make trips down there to shoot.

“I always thought that it was odd that most of the restaurants down there during the spring and early summer didn't seem to be open even for takeout. I would go to other neighborhoods to shoot and restaurants would be open for takeout, but in Chinatown, it didn't seem like many places were. I wasn't sure if they thought delivery men would be targeted because of racism. I had read back then that racist comments and some violence towards Chinese/Asians at that time were on the uptick. Maybe that was the reason owners of these restaurants kept their doors closed? I'm still not 100 percent sure.

“This particular scene caught my eye right away. The front of the restaurant was boarded up so thoroughly with two little windows: one to look out of and the other to receive money and give out delivery orders. I saw the employee looking out so I lined up the shot. It was almost as if he was in a jail cell peering out.”