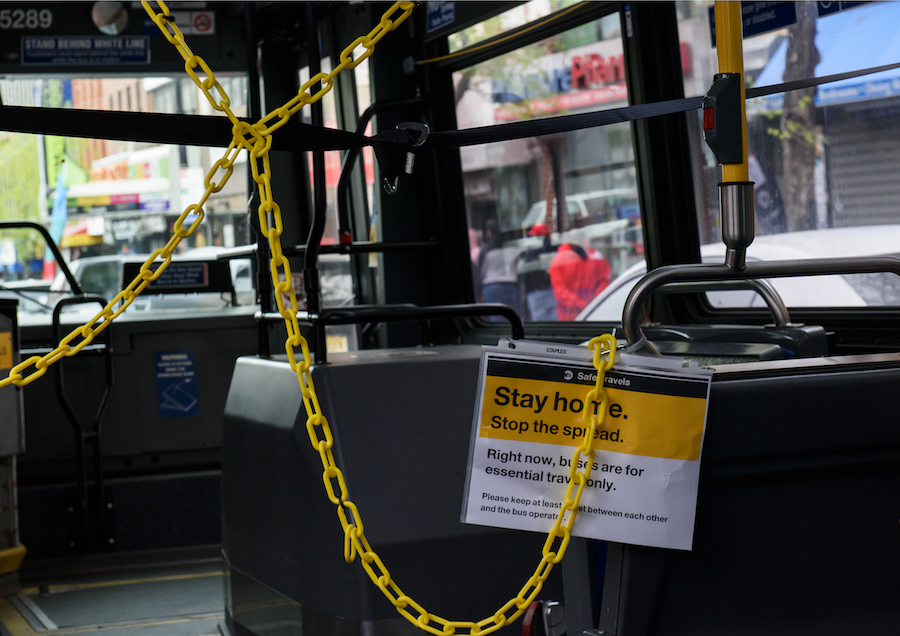 One of the greatest challenges during the lockdown was how to keep New Yorkers moving safely. Even though more New Yorkers than ever walked or cycled, COVID-19 presented a particular challenge for New York’s aging, underfunded, yet essential transportation system. The city that never sleeps had to confront late-night subway closures—but also enjoyed free buses and sparkling clean subways as the MTA used creative tools to try to keep riders and transit workers safe and on the move. 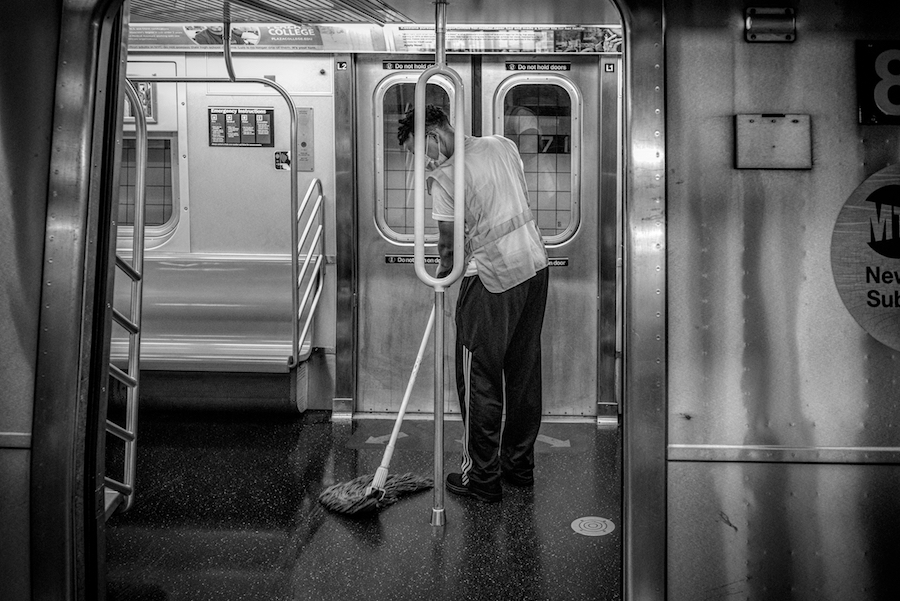 New York City’s subways closed overnight (from 1 a.m. to 5 a.m.) for deep disinfection starting on May 6th. Some critics charged that the cleaning regimen was more for reassuring nervous riders than a necessary public health measure -- and that the shutdown itself was targeting homeless people while putting pressure on workers and others who rely on the city’s famous 24-hour subway service.

But the commitment to cleaning went beyond the overnight stints - disinfecting became a 24/7 regimen. MTA employees were among the “essential workers” who continued their service throughout the pandemic, driving buses and trains, staffing stations, and, along with contractors, keeping the stations and trains clean, as seen in this photograph by Mitchell Hartman.

“Disinfectant II came about when I was traveling the R train to Forest Hills. It was the end of the line, and I was crossing over to start my journey back home when I noticed they were holding everyone from entering the train that was at the station. It was then that I saw they were cleaning the cars. Each car got its own wash-down, and I was lucky enough to capture the moment the cleaner passed the entrance. This wasn't the 1 a.m. to 5 a.m. cleaning – this was every car being cleaned before new passengers were allowed to board the train, and I thought it was important to showcase this not only for myself but for others to see.”

Lisa Kahane
May 6, 2020
Courtesy of the photographer

In the words of the photographer, “As a Bx2 bus winds its way through The Hub, the busiest commercial district in the South Bronx, a yellow plastic chain defines the space around the driver, maintaining the social distance we are all advised to keep around us.  In the Bronx and throughout the city, passengers enter local buses by the rear door. As the farebox is near the driver, rides have been free since March 23 and will remain so until August 31. The front door is opened only for people who need to use the wheelchair ramp.

“A stay-at-home order has been in place for six weeks, with all but essential services suspended. Bronx buses are still crowded with people going to work—staffing hospitals and pharmacies, servicing and securing residential and commercial buildings, stocking bodega and supermarket shelves. Bus drivers and subway engineers are now frontline workers. The MTA, which runs the city’s buses and trains, hesitated to hand out masks until late March. By June, 131 transit workers will be lost to the pandemic.” 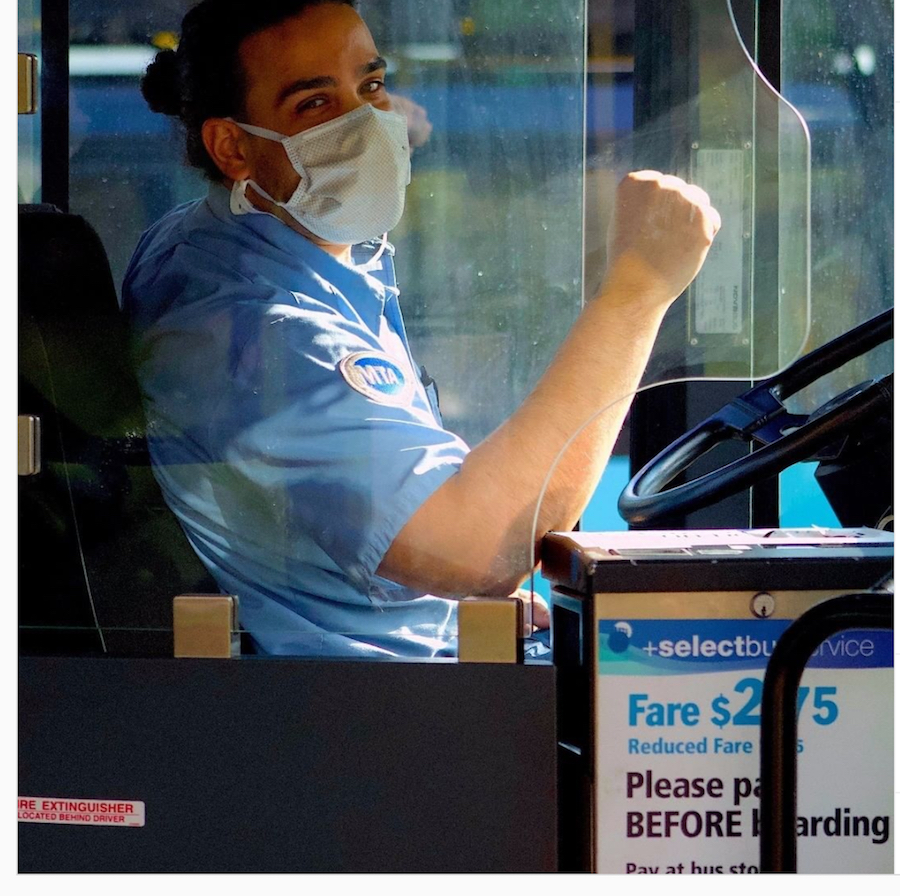 The photographer writes, “In the spring of COVID 2020, I set out for a walk to the Hudson River to rediscover the 79th Street Boat Basin Marina, a community set apart from the zoom of street traffic. As I approached a path to my destination, I walked past a parked MTA bus on 79th Street approaching an underpass. It's here that I took the photograph Absolutely Essential Eyes.

“As I walked past the bus, I noticed the driver sitting speaking to a friend standing on the grass outside. They were both wearing masks. I was feeling quite frozen from the reality of COVID and the barrage of updates and warnings often contradicting themselves. I felt something jovial in the sound of their voices. I kept walking and then stopped, backed up, and approached them.

“I asked if I could take a few photographs. I chose this image to share the warmth of the driver's eyes and the encouragement of strength in the gesture of his arm. Thank you for communicating care as well as providing an essential service. Each person doing his or her best to be safe and to encourage others is one aspect I love concerning the tenacity of New Yorkers. Absolutely Essential Eyes is an example of how individuals in New York can communicate through body language to embolden others to carry on in times of distress protecting themselves by wearing a mask and in turn others.” 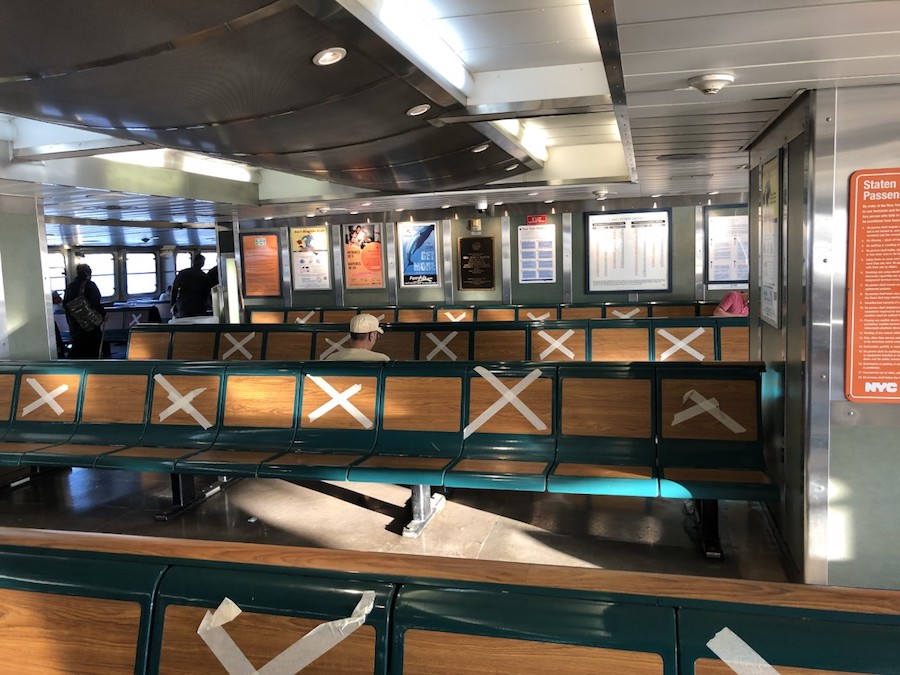 In the words of the photographer, “The Staten Island Ferry is an iconic symbol of the borough and in the Before Time it was almost always crowded with tourists. This photo was taken in June, soon after the lockdown was lifted, and it was a shock to see this rush-hour ferry emptier than many 2 a.m. ferries were before the virus.

“The repetition of the X marks only underlined the emptiness, as did the lone seated figure (who had thoughtfully dressed in white to match the tape). It gave me a feeling of strange familiarity. The virus has changed places that New Yorkers knew and loved (well, maybe not loved exactly, if we’re talking about the ferry, but still) so that they’re there but not the same.”