Laundry Worker Activism in the era of Chinese Exclusion

In the 1930s, in the face of daunting barriers and widespread racism, workers in Lower Manhattan’s Chinatown engaged in unprecedented activism. Amidst the ravages of the Depression, the rise of radical politics, and Chinese Exclusion—federal laws prohibiting Chinese immigration and denying paths to citizenship for Chinese Americans—workers in Chinatown resisted discrimination, demanded labor rights, and connected with the global movements. Drawing on historical research and images from our collection as well as objects loaned from the Museum of Chinese in America and individual families, a new section of Activist New York, which went on view in March 2022, explores this moment. Take a closer look at three of the photographs featured in this display and the stories behind them. 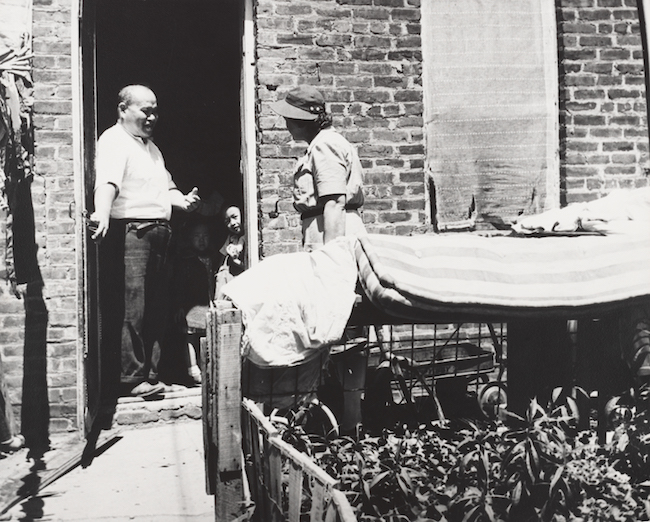 This wave of Chinatown activism was led by workers in hand laundries, which was the largest and most economically sustaining industry in the neighborhood in the era of Chinese Exclusion (1882 until the mid-1900s). Hand laundries attracted generations of Chinese Americans shut out of other jobs due to discrimination, and required only a small monetary investment and little previous experience. While technically small businessmen, laundry workers considered themselves laborers, often working 15-hour days and living in the back of the storefronts staffed by one or two men. After Chinese Exclusion ended and more women emigrated, family members helped run hand laundries. In this photograph, a nurse, part of the Visiting Nurse Service of New York, visits a man and his family at their laundry and residence. 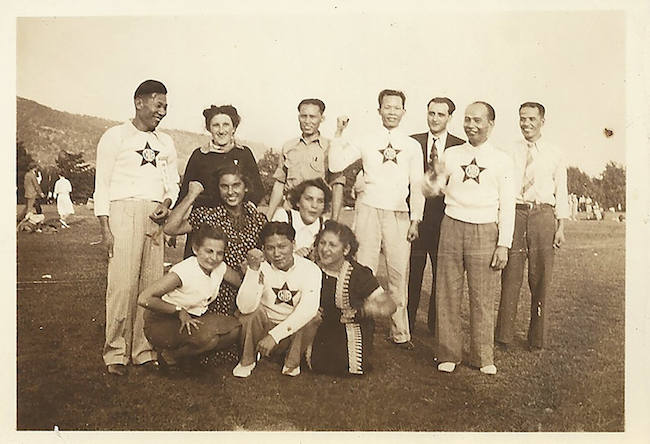 In April 1933, Lei Zhuofeng, Zhu Huagun, Sui Woo, and 250 other Chinese New Yorkers formed the Chinese Hand Laundry Alliance of New York (CHLA). The group arose in response to a bill by the City’s Board of Aldermen that imposed hefty increases in hand laundry licensing fees and citizenship requirements—which most residents were denied under Chinese Exclusion laws. Under pressure, the city reduced the fees and added an exemption to the citizenship clause for Asian New Yorkers. Meanwhile, the CHLA grew to 3,200 members the following year, nearly half of the city’s Chinese laundry workers.1 In addition to fighting ongoing discrimination and helping members apply for laundry licenses, the CHLA provided mutual aid and recreation from its headquarters at 191 Canal Street. The photograph above shows CHLA members including Sui Woo, second from right, at Bear Mountain, north of New York City. The person in a suit standing next to Woo may be Julius Bezozo, a lawyer for the CHLA and other progressive causes. While we haven’t identified others in this photo, it captures the organized retreats and picnics common on the left at the time and provides a glimpse into solidarity across movements. 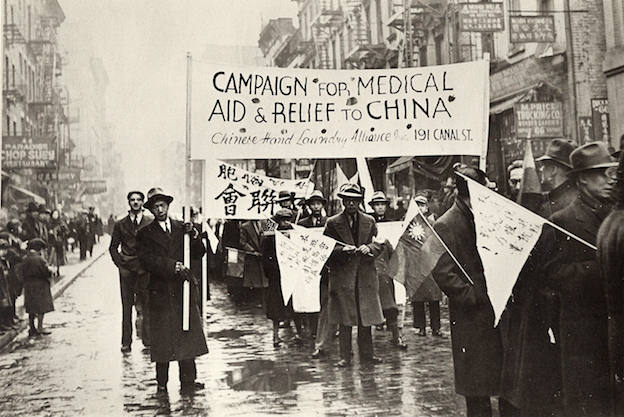 In addition to opposing discrimination and exploitation in New York, laundry workers engaged with events on the global stage. After the Japanese army occupied Manchuria in 1931, Chinese Americans fundraised and mobilized around the invasion of China in New York as this third photograph shows. The CHLA largely supported Chinese communists, and after the People’s Republic of China (PRC) was established in 1949, CHLA members experienced intense surveillance from the FBI. Some were jailed under the Trading with the Enemy Act, others were deported or left the country, and at least one member committed suicide. About 300 people remained in the group by the 1950s, which increasingly espoused uncritical support of the PRC—even as other members who returned to China were disillusioned by what they saw. Despite decreased membership, the organization lasted into the 21st century. Although the founding members are no longer alive, some family members continue to tell their stories.2 With the recent rise in anti-Chinese discrimination and violence amidst the COVID-19 pandemic, histories of repression and mobilization in New York’s Chinatown remain as important as ever.

Learn more about laundry workers and the CHLA at the Museum in Activist New York, or visit the exhibition online.

1 Much of the information about the CHLA comes from Renqiu Yu, To Save China, To Save Ourselves: The Chinese Hand Laundry Alliance of New York (Philadelphia: Temple University Press, 1992).
2 This includes Betty Yu, whose research on her grandfather Sui Woo contributed significantly to this new section of the exhibition.

Commemorating Ten Years of Activist New York at the Museum

May 2022 marks ten years of the Museum’s ongoing exhibition "Activist New York." Sarah Seidman, Puffin Foundation Curator of Social Activism, takes a look at the history of the exhibition, its present, and where we go from here.
See All