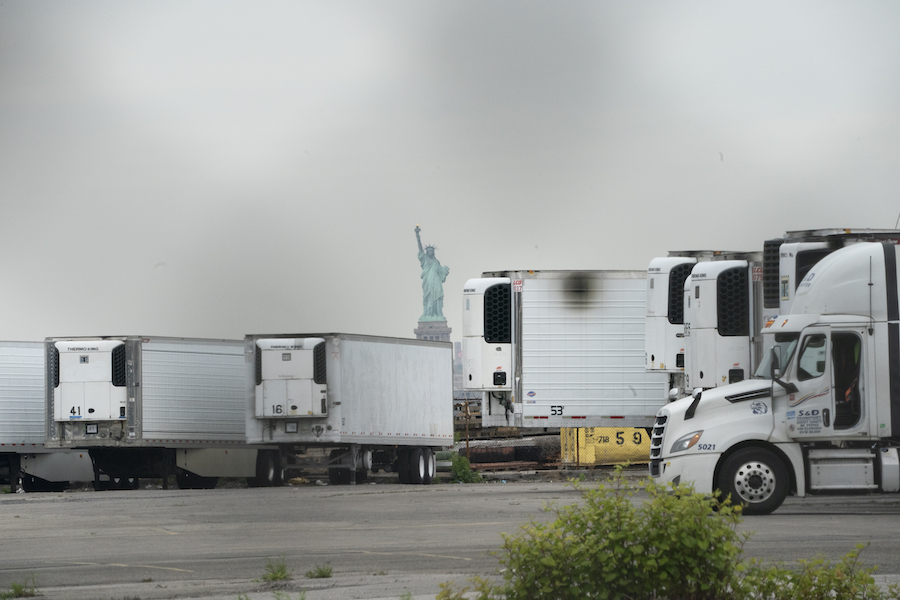 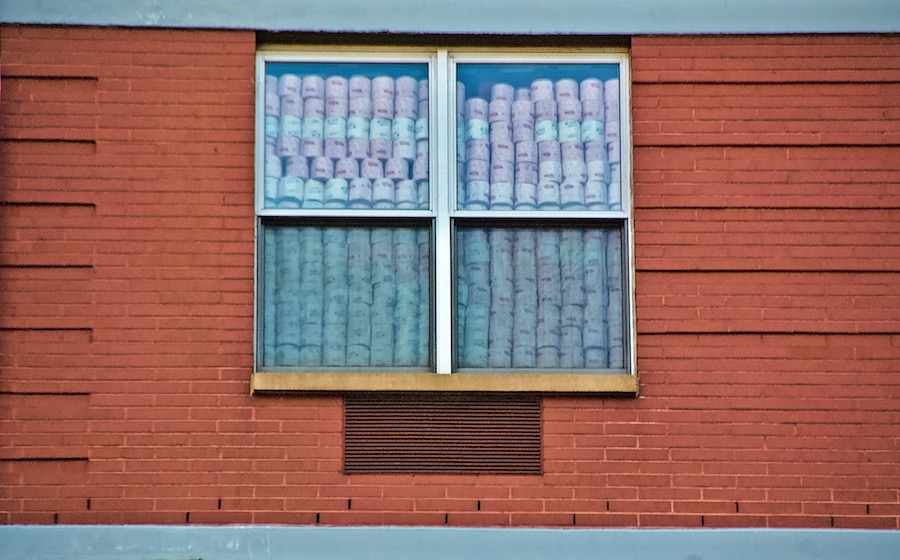 "Signs start appearing with messages that wouldn't have made sense a few months ago." 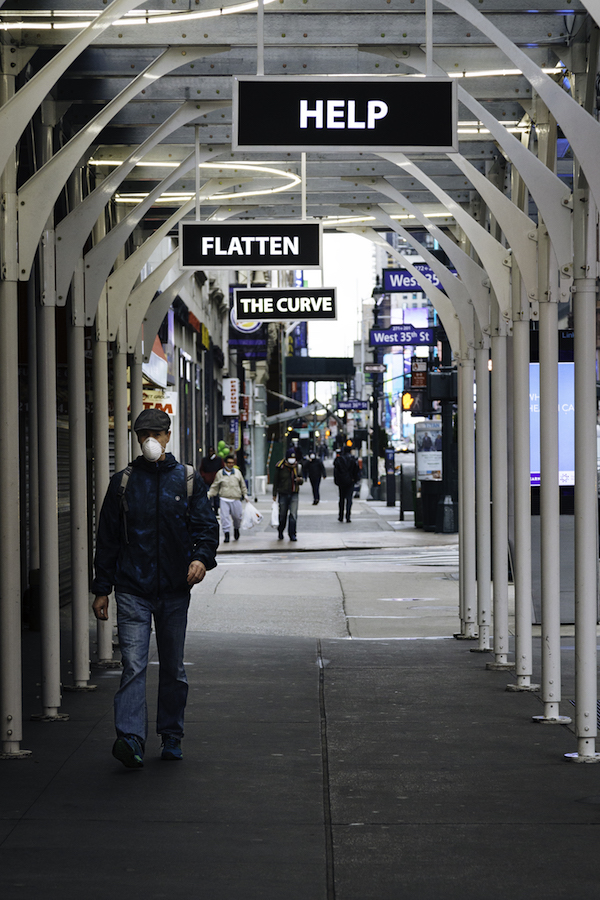 “Help flatten the curve” became a rallying cry of public health professionals during the pandemic, as they called upon the public to wear masks, socially distance, and stay home in order to prevent cases peaking too precipitously and overwhelming the health care system.

The photographer writes, “Departing from my typical genre (nature and wildlife photography), I ventured out during the COVID-19 lockdown to document the city's empty streets, vacant landmarks, and drastically changed public life. I took this photo on Seventh Avenue, between 34th and 35th Streets, on April 18, 2020. The signs overhead caught my attention. They seemed to have been there all along, but of course, they weren't.

“A message like that wouldn't have made sense a few months prior. In the spring and summer of 2020, more messages like these were popping up all over town: in storefronts and on billboards, murals, stickers, and graffiti—all urging New Yorkers to do their part in fighting the spread of COVID-19.”

[“Be Well” on the marquee of the Apollo Theater] 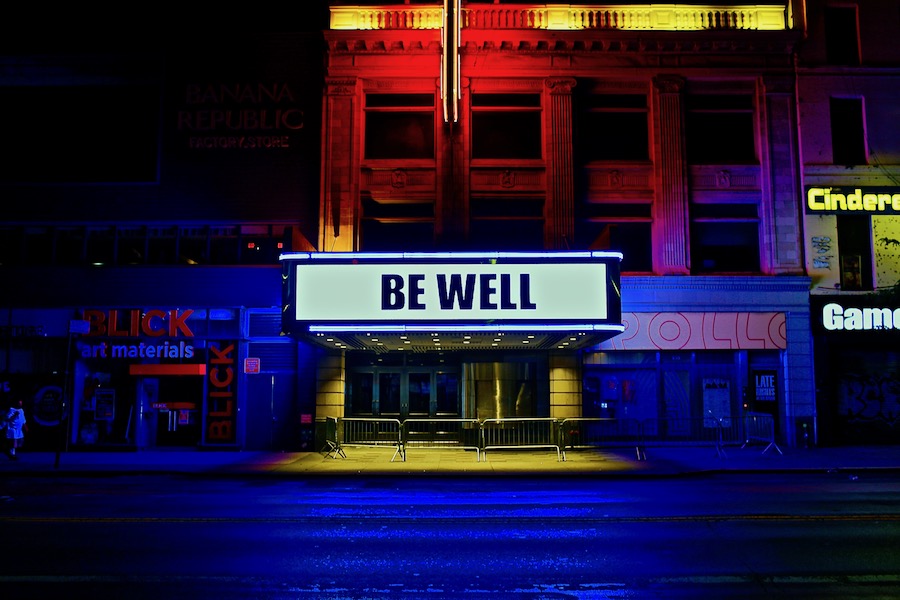 [Praying outside St. Patrick's Cathedral, which was closed due to COVID] 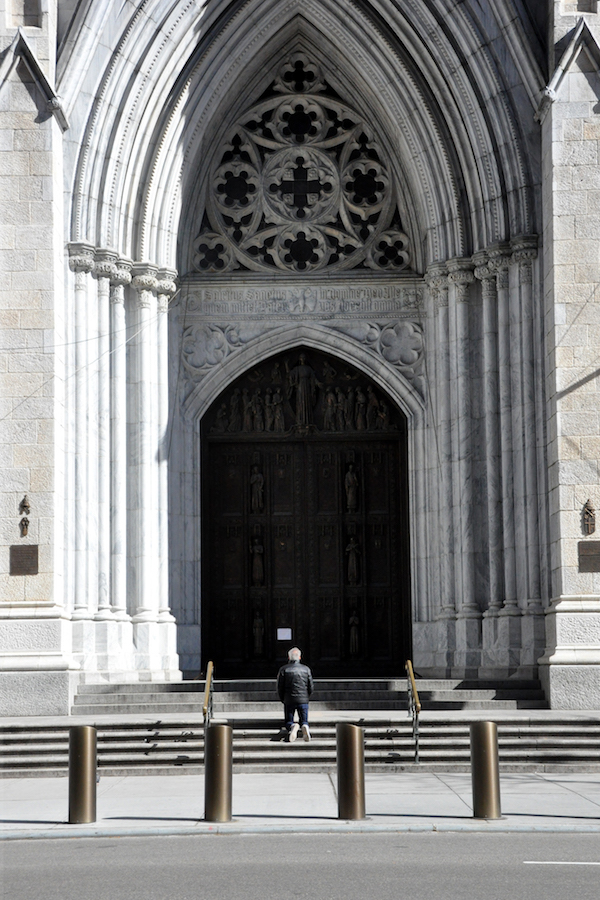 The photographer recalls, “On March 22, the epidemic was rapidly spinning out of control and a statewide ‘stay at home’ order went into effect that day. The city reported 2,832 new COVID cases and many more were sick, but could not be tested. Thousands were hospitalized and deaths were rising rapidly. Offices, schools, and ‘non-essential’ businesses were all closed. Midtown streets were deserted. Millions of Americans had lost their jobs and financial markets had crashed. In that moment of overwhelming fear and confusion, the comfort and refuge of the church premises were shut off.

“The man in the picture is a tiny presence alone in the enormous physical and spiritual space of the church entryway. He may have been there for a very personal reason, but in the image, he represents all of us, humbled by the developing catastrophe.

“Many months later we are still living with COVID, but streets are busy, churches are open, and fear is largely gone. The photo captures a moment and mood which have fortunately passed. 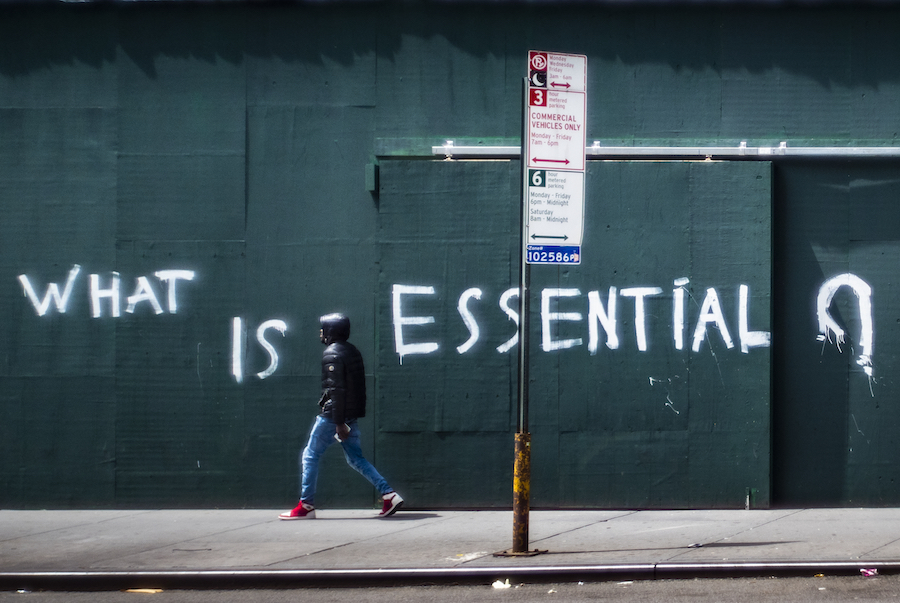 Russ Rowland
May 4, 2020
Courtesy of the photographer

The photographer recalls, “After weeks of only going into Central Park to keep sane, I decided to walk south (I live Upper West) into Midtown and below with a friend just to see what was open and what was going on. I was amazed by how few people, even on a beautiful day, were in the streets. It was a people-less vision of NYC I've only seen during snowstorms in the middle of the night. It was strange, and kind of a delight.”

“I saw a lone figure suddenly crossing in front of the very pressing and apropos question.”

Bryan Smith
May 6, 2020
Courtesy of the photographer

This photograph was taken from Industry City, Brooklyn. The photographer writes, “The Statue of Liberty is pictured beyond where refrigerated morgue trailers at the South Brooklyn Marine Terminal were holding the bodies of people who had died of COVID-19. The temporary emergency morgue was set up in April until funeral homes or crematories could accept the bodies.

“The Statue of Liberty is a symbol of America and to see trailers of bodies at the base is an image of a country failing at the most basic responsibility: to keep our citizens safe. Knowing now what we didn't know then, this photo speaks more to the failures of the Trump administration in having a cohesive national plan in place to address the virus. At the time I hoped that this image would be a notice to Americans to take this virus seriously and follow facts and science, to wear a mask out of respect for the first responders and fellow Americans that are putting themselves in harm's way for us.”

In a climate akin to wartime, New Yorkers came together—often virtually—to remember, to mourn, and to heal.

As NYC faced down the virus, healthcare workers met the challenge with determination and a spirit of innovation.

Clapping and banging pots at 7 p.m. became a way to thank essential workers for their service and sacrifices.