Marian Anderson was a vocalist of incomparable stage presence and musical genius who sold out concert halls worldwide, but she is most often remembered for the barriers she broke as a Black classical singer in segregated America. During her life, however, she refused to refer to herself as an outspoken civil rights activist. Instead, she led progress by using her talent to gain access to historically white spaces, and she utilized her wardrobe to slowly dismantle and deconstruct American perceptions of blackness. She spoke of her particular brand of activism stating: “I always bear in mind that my mission is to leave behind me the kind of impression that will make it easier for those who follow.”

Anderson innately understood that her appearance, secondary only to her voice, was the primary way that she connected with people. She knew that in order for her audiences to embrace her, she needed to conform to the image of a prototypical classical singer while also maintaining her identity as a woman of color. Her concert gowns were frequently the most important piece in constructing and performing this identity, and she spoke of them as her “uniform.” Anderson documented her personal thoughts on the events of her life in her 1956 best-selling autobiography, My Lord, What a Morning, where she devoted a significant amount of space to discussions about her clothing, emphasizing the adept way that she utilized her wardrobe as a tool for activism, but also her genuine love of fashion.

In recognition of their significance, both to herself and to her legacy, Marian Anderson saved nearly all of the gowns she wore throughout her professional career. In her autobiography, she joked, “when we were building our house in the country my husband observed, ‘I don’t think we can build a house around your evening clothes.’” Twelve of those garments—11 concert gowns and one evening coat dating from the early 1930s to the late 1950s—now survive in the collection at the Museum of the City of New York. Following Anderson’s death in 1993, the garments were purchased by Bette Midler and donated to the museum with the express purpose of preserving the singer’s legacy. The Museum has undertaken a project to examine, photograph, and digitize this collection of garments in recognition of Anderson, and to join in celebrations of other powerful women of color on the 2021 inaugural stage. In 1957 Marian Anderson became the first African American to perform at an inauguration, and in 1961 she became the only performer to appear at two inauguration ceremonies.

The four garments that were chosen for the installation document important periods in Anderson’s barrier-breaking path of firsts, and they demonstrate how she utilized her performance clothing to combat the racism she faced throughout her career. The collection of garments also emphasize the importance of New York City designers to Anderson’s wardrobe. She had many of her gowns custom-made by New York City costume designers, including Eaves Costume Co. and Barbara Karinska, and she purchased many pieces of her wardrobe from notable New York City department stores like Bergdorf’s and Wanamaker’s. However, a number of her gowns are unlabeled, and they survive as evidence of the various Midtown and Harlem-based dressmakers that Anderson collaborated with to meticulously construct both her personal and professional wardrobe. 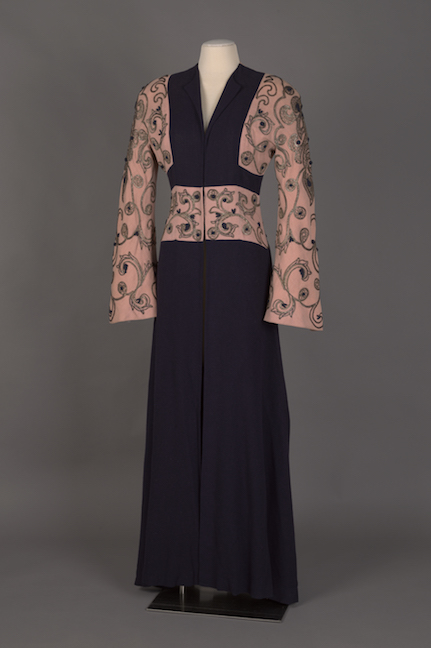 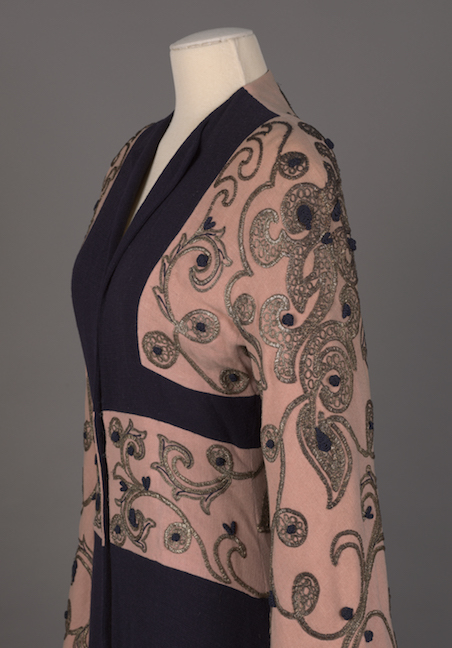 The sole coat in the collection was made by Wanamaker’s Fashion Salon at their Philadelphia store. Anderson would have worn this coat for performances overtop a mono-chromatic and well-cut silk gown. The Wanamaker department store was particularly significant to Anderson. Her mother did cleaning work at the Philadelphia store to support Anderson and her two sisters, and in her autobiography, Anderson spoke of the unequal treatment her mother received in comparison to her white coworkers. However jaded she felt towards Wanamaker’s for the treatment her mother received, Anderson purchased clothing and accessories from the department store throughout her career. She understood how meaningful it was for her audience to see her wearing the highest quality clothing on the world’s biggest stages. 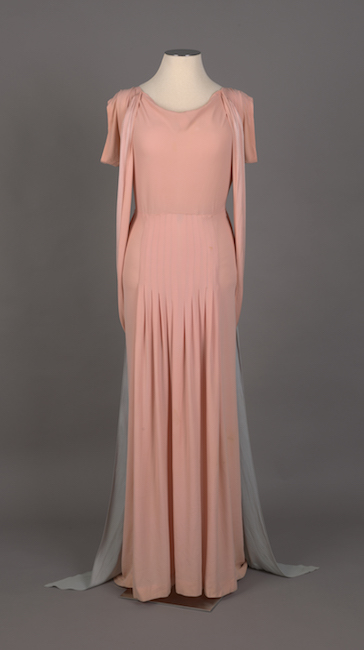 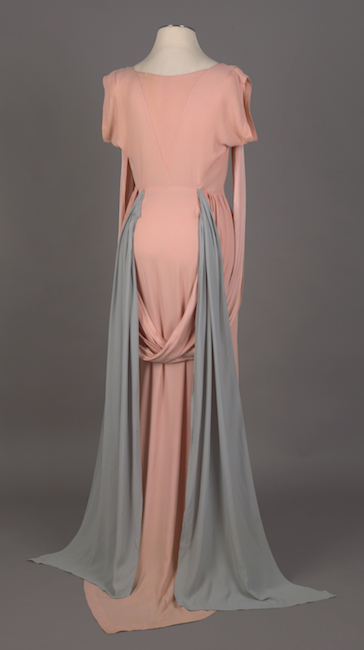 This crepe-backed satin gown, made between 1934 and 1936, was one of several that Marian Anderson purchased from the Nordiska Kompaniet department store in Stockholm, Sweden—an exclusive venue much like the Galleries Lafayette in Paris, or Bergdorf’s here in New York. Anderson first traveled to Europe in 1927 to pursue vocal training, but she quickly found success performing on Europe’s grand stages. At the time she only owned a couple of performance dresses, one concert gown, and she sewed much of her personal wardrobe. At the start of her first Scandinavian tour, Anderson was performing several sold-out concerts on consecutive nights in the same cities, and she could no longer wear the same gown each night. Her manager’s wife, Therese Enwall, took Anderson to purchase a series of new concert gowns at the Nordiska Kompaniet, and she continued to shop there until she began wearing custom-made gowns designed for her by costume designers. 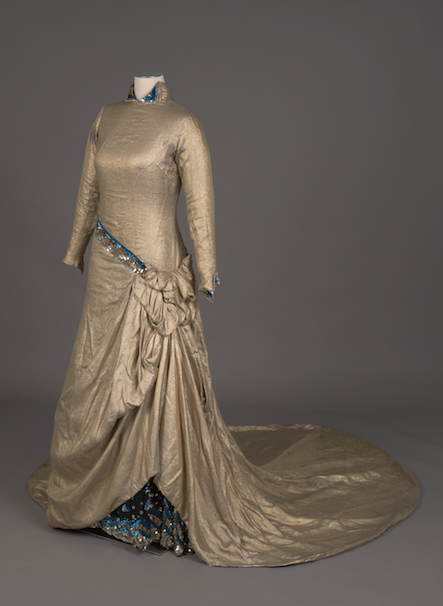 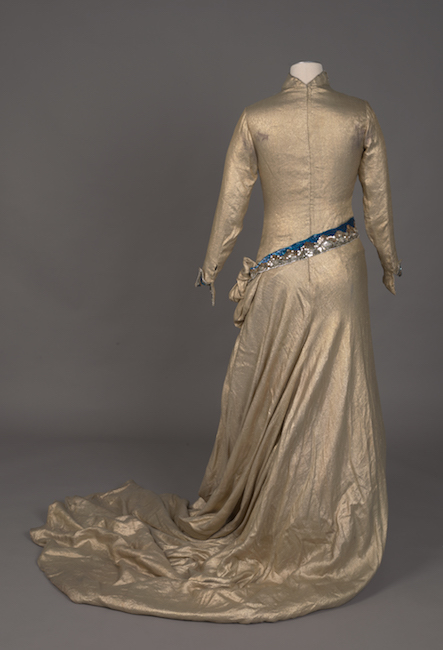 This magnificent concert gown was part of a purchase of six custom gowns and four custom headpieces made for Anderson by Eaves Costume Company in late 1938. This gown was the most expensive of the entire purchase, costing $310—which is not surprising given its sheer volume, length, and elaborate detail. It’s made primarily of gold lamé with a heavily beaded black chiffon underskirt of applied iridescent sequins and glass beads.

Marian Anderson wore another gown from this 1938 purchase to her barrier-breaking performance at the Lincoln Memorial on Easter Sunday in 1939. When she returned to the United States from Europe in the mid-1930s, she recognized the significance of her rapidly ascending career. Almost in anticipation of an impending battle, she approached Eaves Costume Company, which specialized in historical costumes for theatrical performances, to purchase several uncharacteristically elaborate gowns for her 1938-1939 concert season. Less than a year later she wore one of those gowns to her infamous open-air concert, organized in protest of the Daughters of the American Revolution refusing to allow her to perform in Constitution Hall. Anderson did not want to speak publicly about the discrimination she endured from the D.A.R., later stating she was not destined to use her words for “hand-to-hand combat.” Instead of going to combat with her words, she used her clothing as her tool: she performed on the steps of the Lincoln memorial armored in a gown fittingly inspired by historic military costume. 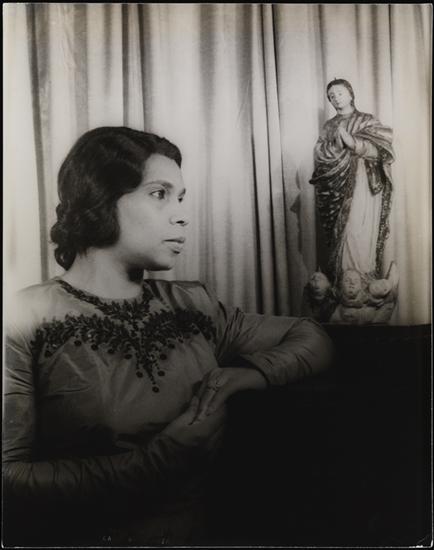 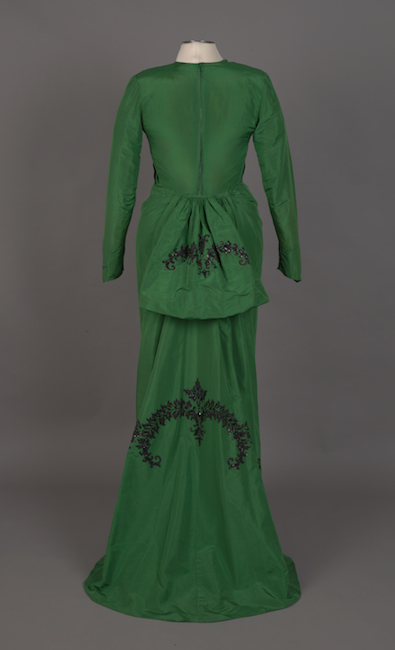 This unlabeled 1947 concert gown was a favorite of Marian Anderson’s. She wore it to several performances as well as for a series of portraits taken by Carl Van Vechten in 1947. After her return from Europe, Anderson was a staunch supporter of other women of color, and that included the designers and dressmakers she worked with to construct her wardrobe. She was a known client of Zelda Wynn Valdes, fashion and costume designer to prominent celebrities and performers in the Black community. Valdes opened her dressmaking studio on Broadway in Washington Heights in 1948, possibly the first black-owned business located on Broadway in the City. Anderson also frequented Harlem dressmaker Agnes Cully Peters, who began designing concert gowns as well as making and altering items of clothing for Anderson’s personal wardrobe beginning in 1939.

Six other gowns in the collection are also unlabeled, and each of them continues the legacy of Marian Anderson’s particular brand of activism. Anderson placed value in the work of the designers she collaborated with by saving the garments they made for her. It is because of her that they survive in the collection at the Museum of the City of New York today.

Stay tuned for more on Marian Anderson as we launch new digital content throughout the month of February.

Marian Anderson, the Presidential Inauguration Ceremony, and the Order of History

Pioneering singer Marian Anderson was the first Black woman to perform at a presidential inauguration when she sang the national anthem at Eisenhower’s inaugural ceremony in 1957. A quiet but continuous force for racial equality, we would do well to remember Anderson’s unmistakable voice for the 2021 inauguration.
See All