Glory at The Garden: When the Knicks Won it All

On the morning of May 8, 1970, a crowd of peaceful protestors gathered in lower Manhattan to voice opposition to the ongoing war in Vietnam. Four days earlier, National Guardsmen had shot and killed four student protestors at Kent State University in Ohio and tensions were running high. By noon, a crowd of construction workers – many from the World Trade Center site – converged on the protestors with counter-protest slogans like “USA All The Way,” and what ensued that day has been recorded in history as the “Hard Hat Riot,” a symbol of division and animosity in a time of national crisis.

Yet, later that day – about 40 blocks north – basketball fans from across the five boroughs erupted in joy and celebration as the underdog New York Knicks clinched their first NBA title at Madison Square Garden in Game 7 versus the LA Lakers. At a moment of national turmoil – and as New York City, at the time known as “fun city,” stood at the dawn of a decade that would bring some of its bleakest days – the story of the 1970 Knicks reflects both the grit and panache, the resilience and utter coolness of the city’s basketball players and its fans.

Although the Knicks clinched their first NBA title at the “Mecca of Basketball,” Madison Square Garden, the relationship between the team and the venue was relatively new. In the 1950s and 60s, the previous iteration of the famed arena on 8th Avenue had been a venue for college basketball. Double and even triple-headers played between powerhouse college teams were the main draw and the smoke-filled arena was more a venue for gamblers than for families. NBA players did not have the star or earning power of their counterparts in Major League baseball, and many players held side jobs to maintain their income in the offseason. As college basketball fans filled the Garden, the Knicks played at the 69th Regiment Amory on Lexington Avenue. Yet by 1968, the world was changing and so was basketball in New York.

William “Red” Holzman, who joined the Knicks as head coach in 1967, was the first piece of that change. The Brooklyn-born son of Russian-Jewish immigrants had played at Franklin K. Lane High School and at City College he brought an energy that was honed on the playgrounds of New York and an emphasis on teamwork that would come to define the Knicks. In 1968, Madison Square Garden moved into its new (and current) location on the site of the former Pennsylvania Station, heralding a new status for the game in the New York, as crowds from all over the city – including celebrities like Barbra Streisand and Robert Redford – flocked to the gleaming new arena.

By the start of the 1969-1970 season, the Knicks reflected this era of exuberance and cool. With players like Bill Bradley, the Princeton-educated Rhodes scholar sharing the court with Willis Reed, a graduate of Grambling State University who grew up on a farm in Bernice, Louisiana in the Jim Crow south, and Phil Jackson, the son of two ministers raised in a deeply religious community in rural Montana, the Knicks were a diverse team that attracted a new base of fans drawn by the flair and fun that they brought to the game.

Indeed, 1969 had been a remarkable year for New York City sports. In January, the underdog New York Jets, led by Joe Namath, defeated the heavily favored Indianapolis Colts at the Super Bowl. Later that year, the “Miracle Mets” – a team that had never had a winning season – won the World Series. As the dual crises of the Vietnam War and the assassinations of Martin Luther King, Jr. and Robert F. Kennedy shook the nation, New York City, and its sports fans, looked for hope and joy where any place it could be found.

In April of 1970, the Knicks faced off in the NBA Finals against the Los Angeles Lakers, a powerhouse team led by stars like Wilt Chamberlain, Elgin Baylor, and Jerry West. While the teams were well matched, in Game 5, Willis Reed, the team captain, severely tore his thigh muscle, forcing him to sit out Game 6. What followed, in Game 7 at Madison Square Garden has been enshrined as an epic moment in sports mythology for over 50 years.

For the sold-out crowd at the Garden, the possibility that Reed would have to sit out the game felt like a devastating blow. Without knowing that Reed had received a cortisone shot in the locker room from the team doctor, the crowd let out a colossal roar when the 6’10” Reed limped on to the court. Decades later, veteran commentator Marv Albert recalled that he had never heard a crowd cheer as they did for Willis Reed that night in May.

Though hobbled by his injury, Reed scored the first two shots of the game and played solid defense against the 7’ 1” Wilt Chamberlain. Though Reed had to sit out the second half of the game, Walt Frazier took the scoring lead and, putting up 39 points, led the team to a heroic, miraculous victory of 113-99 against the Lakers. Later that night, Howard Cosell told Reed on national television “You exemplify the very best that the human spirit can offer.” 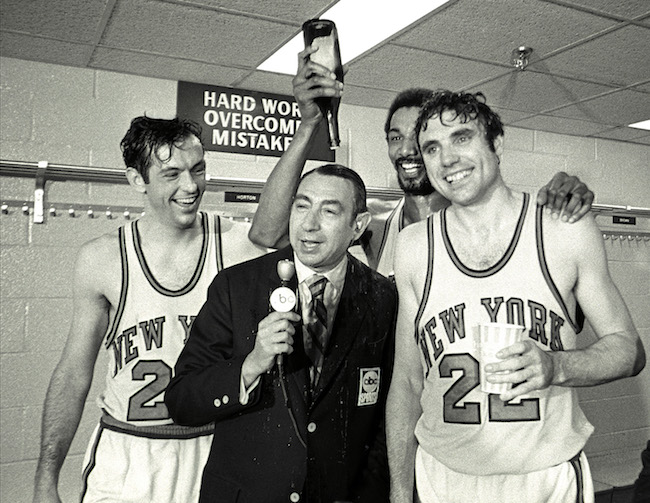 Dave DeBusschere and Bill Bradley celebrate their championship triumph over the Lakers at Madison Square Garden, 113-99, by pouring champagne on ABC announcer Howard Cosell. Image Credit: From the Lens of George Kalinsky. 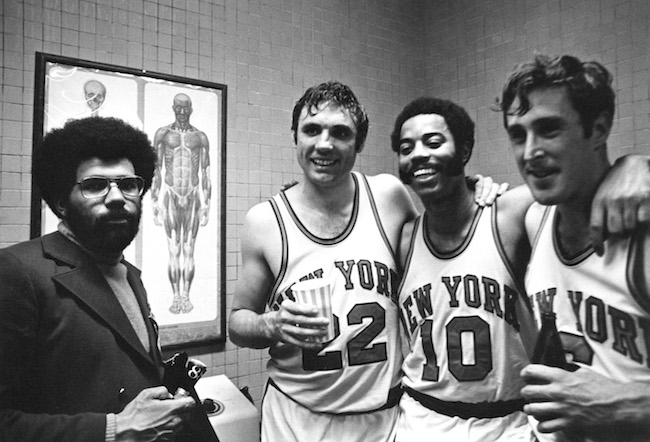 5/8/1970, CBS Radio's Ed Bradley interviews Dave DeBusschere, Walt Frazier, and Mike Riordan after the Knicks defeat the Lakers in Game 7 to win the NBA Championship. Image Credit: From the Lens of George Kalinsky.

The Knicks would go on to win another NBA Championship in 1973, joined by former rival and star of the Baltimore Bullets, Earl “The Pearl” Monroe. The team kept up their celebrity status; Walt Frazier in particular made a splash with his personal fashion, a cool 1970s style of suits, hats, and cars that earned him the nickname “Clyde” after the character played by Warren Beatty in Bonnie and Clyde. Several of the players authored books about the championship seasons.

Reed, who was named both regular season and NBA Finals MVP, went on to a career in coaching, first with the Knicks and later with the Nets. Bill Bradley, the former Rhodes scholar, retired from basketball in 1977 to run for U.S. Senate, representing New Jersey. Bradley ended his Senate career in 1997 but ran to be the Democratic Presidential candidate in 2000. Walt Frazier has been the voice of the Knicks for decades, providing commentary for games on the MSG network. Phil Jackson, who sat out the NBA finals in 1970 due to a back injury, went on to be of the most successful coaches in NBA history, winning 11 NBA titles with the Chicago Bulls, as Michael Jordan’s coach, and with the L.A. Lakers, where he coached Kobe Bryant and Shaquille O’Neal.

As New York City again faces a period of crisis – as a social and economic tumult have again rocked the city and the nation – it helps to take a look back at a moment when raucous crowds of joyous New Yorkers cheered on their supercool sports heroes, when NYC beat L.A., when the city’s sports stars were like rock stars, and it felt like New York could still be a fun city and anything was possible.