With the heat and humidity beginning to wane, fall is the perfect time to explore New York City on foot. The Museum ran a program of very popular Sunday Walking Tours from 1960 until the mid-1980s, providing tourists and New Yorkers alike a “unique opportunity to explore the neighborhoods of New York at a leisurely pace, with knowledgeable and charming guides along to point out fascinating, little-known details of history and architecture.” Tours were offered in the spring and fall, and the repertoire covered nearly every neighborhood of the city: Harlem, the Upper West and East Sides, Lower Manhattan, Chelsea, the Bronx, Brooklyn Heights, Prospect Park, Flushing, Times Square, Governors Island – the list continues. 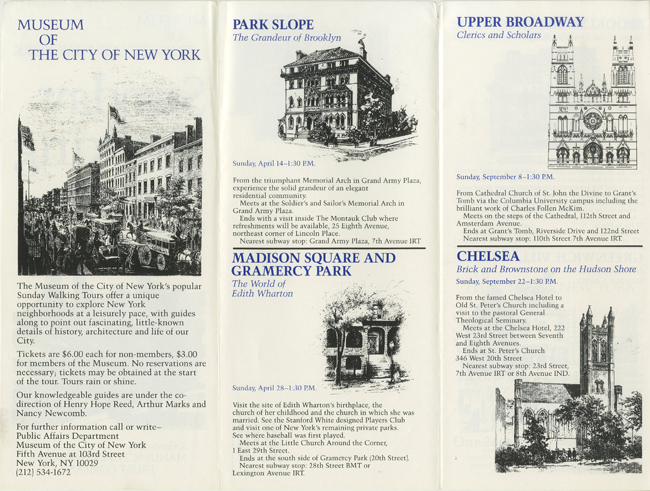 The Sunday Walking Tours were started by Henry Hope Reed, Jr., an architecture historian and curator of Central Park. Reed wrote detailed scripts for the tours he designed for the Museum, based on his book Walks in New York, published in 1960. The scripts are full of commentary about an area’s history, architecture, and well-known people. His notes for the Upper East Side tour, “From the William Starr Residence to the Museum of the City of New York” are twenty-eight pages long and so detailed that one could walk right out the Museum’s doors and lead the tour today!

The tours were primarily organized geographically, and some were thematic, including “Irish Life in New York,” “Whitman’s New York from SoHo to Fulton,” and “Worth Street: Cast Iron City.” The tours went at a leisurely pace, sometimes stretching to four hours, and made stops along the way to go inside certain landmarks, or to speak with New Yorkers. In Reed’s notes for the Chelsea tour, he instructs guides to visit the Chelsea Hotel, “GO INSIDE CHELSEA – point out the bronze staircase and Manager’s office – print of Opera House, former ladies parlor, shelf of books, ceiling, fireplace.” An article about the tours in an August 1980 issue of the Chelsea Clinton News describes a visit to the Chelsea Hotel apartment of George Kleinsinger, a composer, and describes the tour as “alternatingly fascinating, dull, silly and amusing.”

Records in the Museum’s Institutional Archives show that by the 1980s the walking tours were a well-oiled machine. Tour guides included brief notes about their tours when submitting money earned to the financial office, and the notes illustrate how popular the tours were: “Approximately 70 people / Nice weather but warm and humid / In NYT” [Chelsea Walking Tour]; “Approximately 175 people took the tour / sunny, warm, humid / In NYT, New Yorker, WOR” [Walking Tour of the Squares]; “Approximately 160 people/weather very bad – rain & thunderstorms / very warm and muggy.” [Chelsea Walking Tour]. A June 1980 tour of Greenwich Village attracted approximately 261 participants! The groups were typically split into groups of 30 to make them more manageable.

While these tours might have fallen out of fashion, we do have some ways we're bringing walking tours into the digital age. Thanks to a partnership with Urban Archive, you can to bring the Museum's collections and exhibitions to life at various points of interest throughout the city. Tour locations in BedStuy, learn more about New York World Fair in Queens, or experience Fred McDarrah's Village—the legendary photographer and photo editor for the Village Voice, featured in The Voice of the Village: Fred W. McDarrah Photographs—with a group or solo. Download the app here (currently for iOS devices), and before the weather turns cold, lace up your sneakers and explore the city from its sidewalks, whether with friends, an experienced guide, guidebook, or an app.