Clement Clarke Moore and Santa in the City

Many people know Clement Clarke Moore (1779-1863) as influential in the popularization of Santa Claus in America with his verse “A Visit from St. Nicholas.”  However, he was also an important New Yorker in his own right. Moore was born on the island of Manhattan in 1779 at Chelsea, the estate belonging to his mother’s family located in the eponymously named current-day neighborhood of Chelsea. Moore inherited the estate after his mother’s death, and gave a large portion of the land to the Episcopal Diocese for the construction of a seminary – the General Theological Seminary – which remains today. Moore was a well-known Biblical scholar of his time and became a professor of Oriental and Greek Literature and Divinity and Biblical Learning at the General Theological Seminary. He divided the remaining lots of land for residential development. Moore’s requirements for sale, including no commercial use, helped to shape the neighborhood. A map showing the land owned by Moore can be seen below.

In addition to his scholarly pursuits, Moore was a devoted family man. He married Catherine Elizabeth Taylor in 1813, and they had nine children together. Catherine died in 1830, leaving children aged three to 15 under their father’s care. He enjoyed writing poetry for his children and grandchildren, including “From Saint Nicholas,” written to his daughter Charity Elizabeth Moore, which is thought to be one of the earliest examples of a letter from Santa Claus. The poem is part of the Museum’s Manuscripts collection.

“A Visit from St. Nicholas,” now more commonly known as “The Night Before Christmas,” was first published anonymously in the Troy Sentinel on December 23, 1823. Authorship was not attributed to Moore until 1837, and Moore himself did not claim the poem as his own until 1844 when he included it in a book of poems published at the urging of his children. In 1844 Moore wrote to then Troy Sentinel publisher N. Tuttle inquiring about the author of the poem the paper had published, and Mr. Tuttle responded with an explanation:

“At the time of its first publication I did not know who the Author was – but have since been informed that you were the author. I understood from Mr. [Orville L.] Holley that he received it from Mrs. Sackett, the wife of Mr. Daniel Sackett who was then a merchant in this city. It was twice published in the Troy Sentinel; and being much admired and sought after by the younger class, I produced the engraving which you will find on the other side of this sheet, and have published several editions of it.”

Moore made several corrections to the version of the poem sent by Mr. Tuttle, including the name of one of the reindeer from “Blixom” to “Blitzen”, which can be seen below: 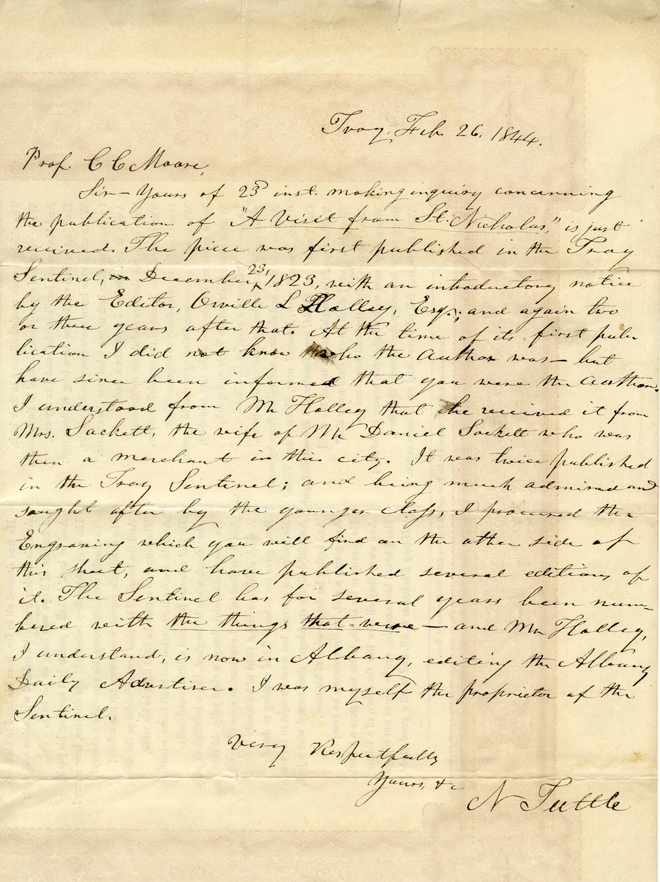 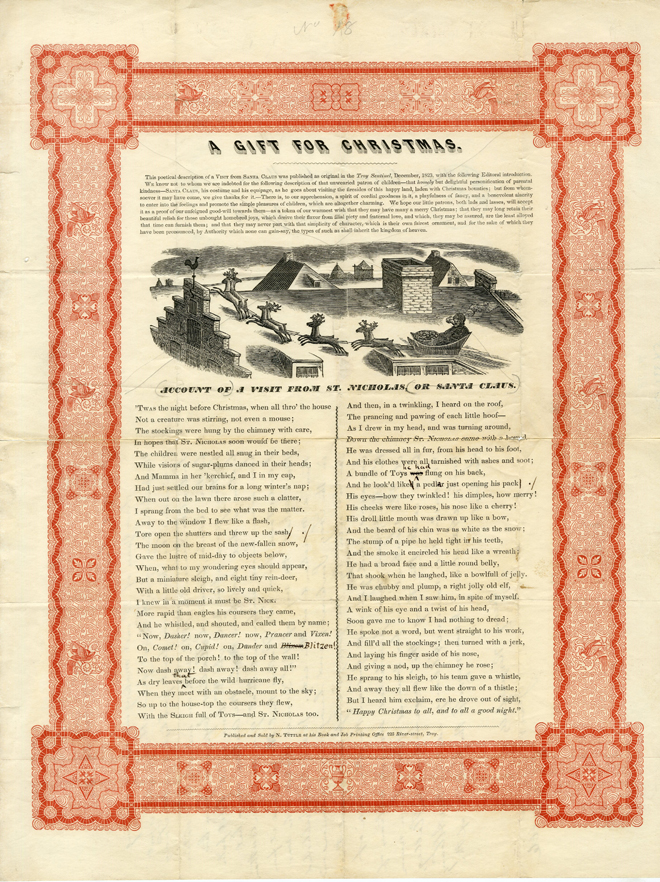 Moore’s delayed claim is one of several reasons the authorship of “A Visit from St. Nicholas” is often contested. Ancestors of Major Henry Livingston, Jr., also a New Yorker, came forward in the early 20th century claiming that Livingston was actually the author. More information about the dispute can be found here. The Museum of the City of New York does not take a position on this issue, but simply presents the related materials that can be found in our collection.

“A Visit from St. Nicholas” has delighted generations of children, including my brother and I who have read aloud from “The Night Before Christmas” on Christmas Eve since we learned to read – and continue to do so although we are both grown and out of the house!  We hope visitors are equally captivated by “From St. Nicholas” during this holiday season.

Santa and the City